• Kalonzo said Wanjigi is so powerful that he was able to convince him to support ODM party leader Raila Odinga’s presidential bid in 2017.

• Wanjigi said he will not budge on his push for the presidency on the ODM party ticket. 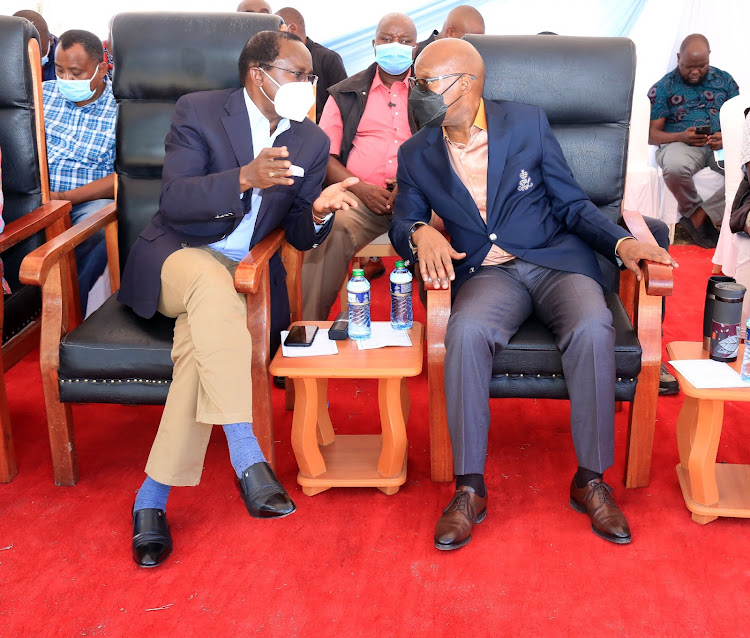 Wiper leader Kalonzo Musyoka has told ODM presidential hopeful Jimi Wanjigi not to politically fix him for the third time.

Kalonzo said Wanjigi is so powerful that he was able to convince him to support ODM party leader Raila Odinga’s presidential bid in 2017.

“You have managed to fix me twice, you fixed me in 2013 when you brought Uhuru and Ruto and again forced me to support Raila. Congratulations Jimi, now it’s you. On a lighter note I want you to know that Jimi is a wonderful person to work with, once he is committed to a course you can’t change him,” Kalonzo said.

But Jimi, my final shot this time is, don’t fix me, he said.

On Wanjigi’s presidential bid on the ODM party ticket, the Wiper leader said he was praying for him as he was fighting to get to the 2022 ballot on the party.

“I am praying for you if you are fighting with Baba, kikiumana huko, kimbia kwa ndugu yako huku, huku Kasarani ninaona itakua kisirani zaidi,” Kalonzo said.

The Wiper leader spoke Sunday during a fundraiser at AIC Daystar Church in Mavoko, Machakos County.

He added, “That’s my advice in a lively manner because that’s the way to grow a democratic country. You have every right to challenge and go for the party nominations. I want to tell you who Jimi is, this Jimi Wanjigi is the one who united President Uhuru Kenyatta and Deputy President William Ruto.”

Kalonzo, however, noted that he was shortchanged in 2013 when Wanjigi had promised him that he would deputise President Kenyatta.

“He came with them to the house and Jimi told me he had even talked to Ruto. Jimi said, Ndugu Steve leave for me Uhuru, Uhuru will be your deputy and Raila will be the majority leader in parliament. Jimi organized that with Ruto, then later said they had changed their minds due to the case they had at ICC," he said.

"So, you look for another thing. They wanted to give me the speaker position. I said I couldn’t be a speaker from the Vice President position."

Kalonzo said it is then that Raila approached him with the intervention of his allies Musila, Ndambuki, Mama Nyiva who asked him whether there was something that had happened between him and Raila that couldn’t be solved.

He added, “Jimi, Uhuru and Ruto have been close friends, I don’t know where they disagreed. You will tell us Wanjigi, it will help the young generation on how to maintain integrity in leadership.”

Kalonzo said Jimi convinced him to support Raila in 2017 since he had parted ways with UhuRuto.

“I told him it was impossible since I supported him in 2013, it was Jimi who on April 17, 2017, escorted Raila, Mudavadi, Wetangula and I to Uhuru park leading to the former Prime Minister’s being nominated as our presidential flagbearer,” Kalonzo said.

He said Wanjigi could overturn the country hence shouldn’t be joked with insisting his presidential bid shouldn’t be underrated.

Kalonzo said he was ready to work with all like-minded leaders including Wanjigi.

Wanjigi said he will not budgee on his push for the presidency on the ODM party ticket.

He said he was ready to meet Raila at Kasarani Stadium for nominations stating that he was sure of clinching the sit if the party nominations were conducted.

“I am going for the ODM presidential seat, just like Raila. Raila has never declared his candidature though. Raila in 2017 said he was firing his last bullet that was already spent,” Wanjigi said.

“We expect free and fair part nominations. In 2017, Kalonzo was saying it was his time, I told him we give Raila one more chance, he agreed and said all was well encouraging that we work hard so that we win the presidential seat.”

“In 2022, it can't be Baba, it ended. We are on another coalition and that’s why we are saying the like-minded leaders must come together because the future is dangerous,” Wanjigi said.

Wanjigi said Kenyans were this time round going to see an election which has never been seen before in this country.