• The man was fast asleep when the stray elephant stormed in on Wednesday night around 8pm.

• Residents say the wandering Jumbos were destroying their homesteads, farms and food stores in the drought. 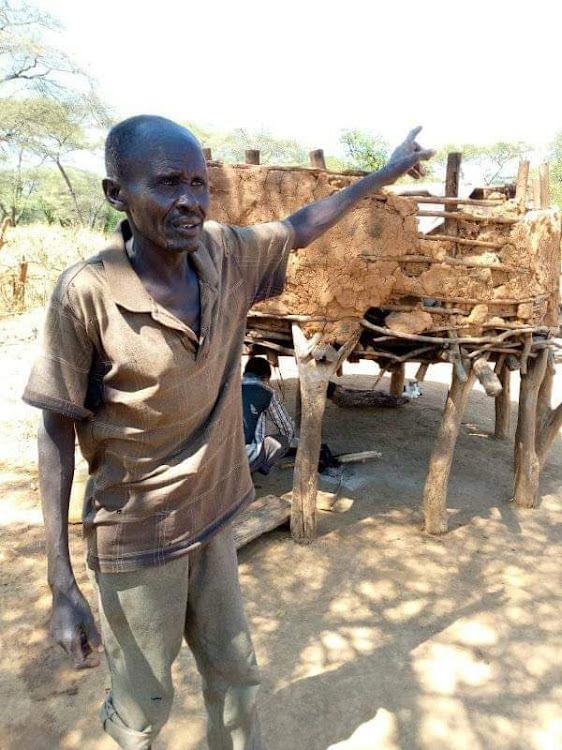 LUCKY MAN: Joseph Kipyekomen, 55, points at the wreckage of the temporary granary where he was nearly killed by an elephant while sleeping on Wednesday night, November 24.
Image: JOSEPH KANGOGO

A Baringo man narrowly escaped death after a hungry elephant stormed and destroyed the temporary, grass-thatched granary where he was sleeping.

The close call on Wednesday night occurred at Kiptiling'on village in the Kerio Valley, Barwesa ward in Baringo North subcounty at about 8pm.

The owner, Joseph Kipyekomen, 55, was deeply asleep at the time of the jumbo raid.

Luckily, I suddenly found myself lying on the bare ground. Then I hurriedly squatted and narrowly slipped off between the elephant's feet and ran away to the bush.

“I thank God to be alive, otherwise, I could be dead and gone by now,” Kipyekomen said on Thursday.

He said the elephant smashed one of his temporary stores containing bags of maize before proceeding knocking down the next wooden granary he was sleeping in.

“Luckily, I suddenly found myself lying on the bare ground. Then I hurriedly squatted and narrowly slipped off between the elephant's feet and ran away to the bush,” Kipyekomen said.

Although he was not injured, the farmer was traumatised and has yet to calm down.

Following the frequent attacks by jumbos and other wild animals, angry villagers are now planning to march to the Kenya Wildlife Service offices in Kabarnet.

They pledge they will also attack the beasts if nothing is done to drive them back to their game reserves.

The animals wander out in search of food and water. NOTHING LEFT: A wreckage of temporary granary where Baringo Kerio Valley man was nearly killed by elephant while sleeping on Wednesday night.
Image: JOSEPH KANGOGO

In the same village, wandering elephants thundered into another resident's grass-thatched food store, knocked off the roof and feasted on two bags of maize. The owner Chelimo Kimwonchoi was not injured.

Katibel sublocation senior assistant James Kamuren said residents have had sleepless nights as the stray elephants have camped in the area since September last year.

Kamuren said several jumbos and calves might have broken out of the Rimoi and Lake Kamnarok Game Reserve in neighboring Elgeyo-Marakwet and Baringo counties, respectively.

What do you expect when people are mercilessly felling trees to burn charcoal, destroying animals’ ecosystem, hence, displacing them?

“It has now become routine for the elephants to storm in to disturb the locals every night,” he said, adding that they broke through wire fences and destroyed farms, crops, houses and food stores.

Cheruiyot said his officers were already deployed in the area to repulse the stray elephants, “so as far as I am concerned, I have not heard such cases of elephants attacking,” he said.

“What do you expect when people are mercilessly felling trees to burn charcoal, destroying the animals’ ecosystem, hence, displacing them?” he asked.

Earlier county KWS warden Lekeren said people refused to vacate the demarcated Lake Kamnarok conservancy and they are now the ones constantly complaining.

“People refused to leave the place, so they should equally learn to coexist in peace with the elephants," he said.

He said the only remedy to end the perennial problem is to map out and fence off the game reserves to keep people and the wild animals at bay.

The habitual fence breakers are males who use their powerful tusks and front legs to cause destruction.
Counties
1 year ago

Baringo residents defaecate in basins for fear of elephants

Stop jumbos from invading our farms or we kill them, Kitui farmers tell KWS

Elephants from Tsavo East National Park strayed into villages and destroyed crops in Kanziku and Simisi villages
Counties
1 year ago
Post a comment
WATCH: The latest videos from the Star
by JOSEPH KANGOGO Correspondent, Baringo
News
28 November 2021 - 23:00
Read The E-Paper