Says politicians are making trouble for government officials who don't do their bidding. 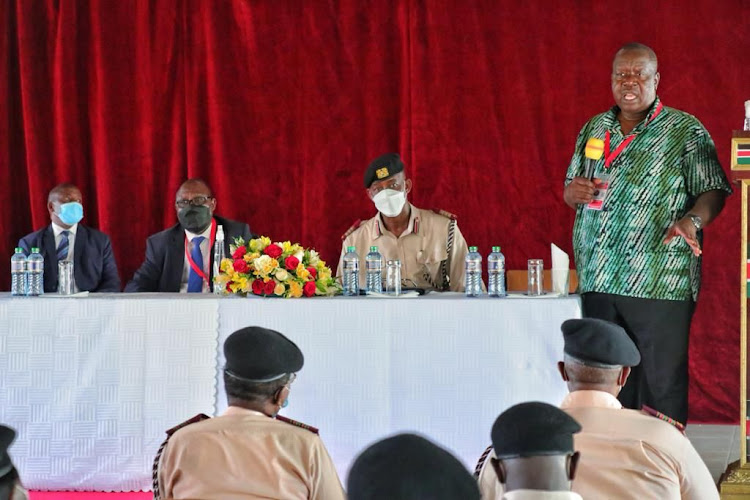 Politicians are frequently harassing and trying to instigate the sacking or transfer of government officials in the runup to the general election, Interior CS Fred Matiang'i has said.

Matiang'i said, however, the government will protect chiefs and other grassroots officers, as well as commissioners  — as long as they are neutral and do the government's work professionally.

“We are aware of many demands and threats by politicians for the sackings and transfers of government officers," Matiang'i said on Wednesday.

"The day we allow politicians to manage our personnel, we will have lost our focus. We will protect you as long as your only crime is prosecuting the government agenda,” the CS said.

Politicians use flimsy grounds to meddle and instigate the transfer or sacking of  government officials who don't do their bidding, the CS said.

The CS assured commissioners, administrators and chiefs their jobs are safe as long as they are professional and execute the government's agenda.

He cautioned them against dabbling in partisan politics, saying they were duty-bound to support the government of the day by actively popularising its policies.

He said more vehicles will be made available to grassroots administrators through the vehicle leasing programme.

Matiang'i said the ministry was keen to groom and promote officers across the National Government Administrative Officers structure on the basis of merit.

“There is absolutely no reason why a hardworking chief should not rise to become a county commissioner or an even more senior rank. We have a specific programme to encourage chiefs to upgrade their certificates and aspire to higher levels of leadership.”

The CS was accompanied by Secretary of Administration Wilson Njega and Makueni county commissioner Maalim Mohammed.

Matiang’i later proceeded to Kajiado county where he presided over the installation of principal chief Wilson Mpapayo of Ntashat location, who has been promoted to senior principal chief.

The leaders said the chief has been instrumental in fostering peace between communities living along the borders of Kiambu and Kajiado counties. He has been especially active in reducing cattle theft by members of the Kikuyu and Maasai communities.