Says as the festive season nears, the number of bookings is rising.

•The CS  said Kenya was removed from the red list in October and people are starting to travel.

•He challenged Kenyans to take the vaccine because there was enough stock. 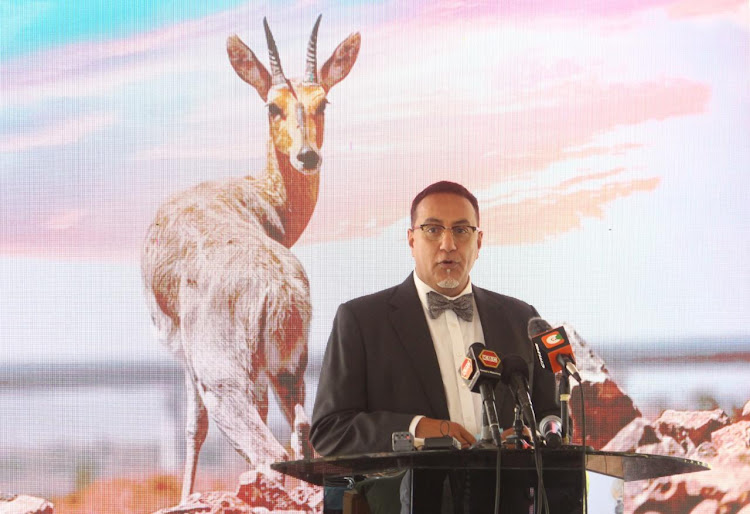 The number of tourists is improving after the Covid-19 disruption, Tourism CS Najib Balala has said.

“We are slightly over 600,000 since January to October. We are positive that we will come closer to a million people up to December,” he said.

Balala said as the festive season nears, the number of bookings is improving and the industry is responding positively.

The CS  said Kenya was removed from the Red List in October and people are starting to travel.

“We want people to travel safely, by December 21, everybody must show their Covid-19 vaccination certificate to avoid a spike after the holiday,” Balala said.

The CS challenged Kenyans to take the vaccine because there was enough stock.

Balala spoke on Thursday at the Kenya Wildlife Service during the launch of the 75th anniversary of the Nairobi National Park at KWS headquarters.

He was accompanied by Wildlife PS Fred Segor and KWS director-general John Waweru.

The services will include KRA services, education, immigration, hospital and prison visitations, NTSA and port services.

The measures were announced to boost the uptake of Covid-19 vaccines.

Balala said children aged 15-18  will get the Pfizer vaccine after the health ministry okayed the move.

The Covid-19 travel and tourism policy brief 2020 by the ministry indicates Kenya has shown an impressive performance in the tourism sector since 2015.

Covid-19 outbreak however disrupted the industry.

“We have given a discount of July last year, over 50 per cent for international and locals and that has now been reviewed. It is going to be upward,” he said.

“It is not easy and cheap, we need to revert to our new process from the first of January 2022. There will be seasonal prices,” he said.

“We will have a season which is a full park entry fee on January, February, March then April, May, June will have very low entry fees for the low season. The price depends on the season effective January.”

Balala said KWS is set to announce its revenues, challenges in mid-January.

During that time, an annual report for the year will be done.

Balala said he signed a MoU with the South Africa government on collaboration in markets, information, technology, product development and meetings, incentives, conferences and exhibitions.

“In January, we will go back to South Africa and study the model of conservation. That is very important because the country makes 100 billion rands from conservation in terms of contribution of GDP,” he said.

Balala said plans are also underway to improve the visitor experience in some of the parks.

He said at Nairobi Park, the facelift will be done by December 1.

The park is also set to be the pilot in revenue management.

Balala said all national parks will be digitised by July 1 next year.

Ticketing and booking are set to go online.

The CS said infrastructure will also be improved inside national parks.