Twenty patients have recovered from the disease, bringing total recoveries to 248,018.

• From the cases, 33 are Kenyans while two are foreigners with 22 being males and 13 are females. 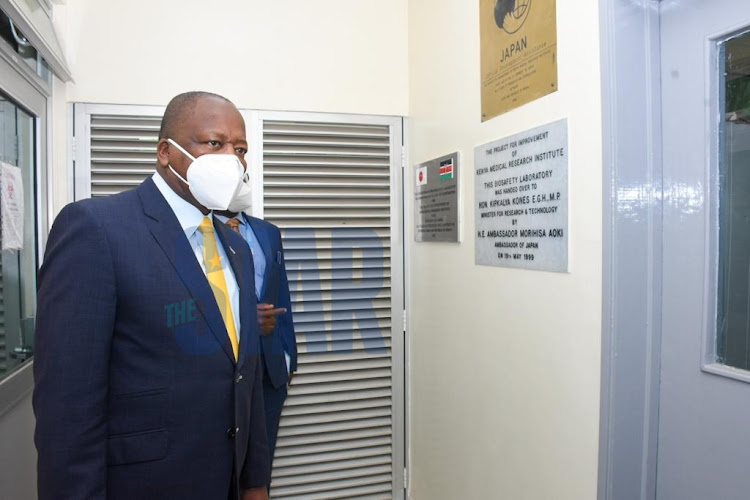 In a statement, Health CS Mutahi Kagwe said from the cases, 33 are Kenyans while two are foreigners with 22 being males and 13 are females.

The youngest is a five-year-old child while the oldest is 79 years.

This now brings the total confirmed positive cases to 254,816 and cumulative tests so far conducted are 2,811,260.

He also announced that 26 patients have recovered from the disease with 22 from the home-based isolation and care programme while four are from various health facilities countrywide.

The total recoveries now stand at 248,018 of whom 200,293 are from the home-based care and isolation programme, while 47,725 are from various health facilities countrywide.

Two patients have succumbed to the disease, pushing the cumulative fatalities to 5,332.

One of the deaths occurred in the last 24 hours while the other is a late death, reported after conducting facility record audits in the month of November 2021.

A total of 346 patients are currently admitted in various health facilities countrywide, while 973 are under the Home-Based Isolation and Care programme.

Twenty patients are in the Intensive Care Unit (ICU), 9 of whom are on ventilatory support and 11 on supplemental oxygen.

Another 112 patients are separately on supplemental oxygen with111 of them are in the general wards. One patient is in the High Dependency Unit (HDU).

The CS also pointed out that for the first time since the vaccination exercise kicked off, the country has recorded the highest number of vaccines administered on a single day.

"As of November 23, we recorded a total of 103,506 vaccines administered, with 53,506 being first doses while 50,000 are second doses. We are happy to note more than the doubling of people presenting themselves for the first dose compared to last week," he said.