Nearly 7,000 children under five at risk of severe malnutrition

The situation is critical in the counties of Garissa, Wajir, Mandera, Samburu and Turkana. 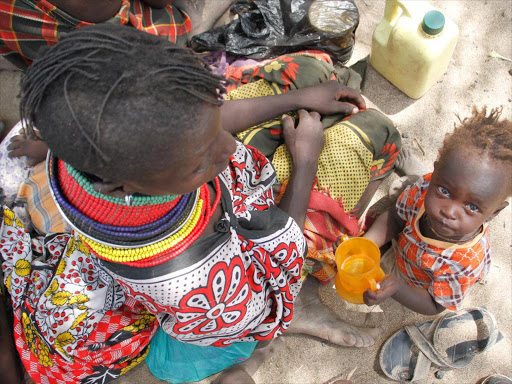 Selina Esiyen and her mother at Nabuskal at a nutrition out-reach site on July 12, 2017 /JACK OWUOR

Nearly 7,000 children under five years in Marsabit county are likely to face severe malnutrition by January.

According to the 2019 national census, Marsabit has about 18,000 population of children under five and this population could be at risk of severe malnutrition by next year.

While speaking to the media in his office in Marsabit last week, Mustafa said malnutrition is spiking in three subcounties: North Horr, Laisamis and Saku.

He attributed the rise in malnutrition to lack of milk as the children depend entirely on it.

Mustafa however said there are a number of interventions being carried out by both the national government and the county in partnership with the UN.

He said the county is giving out soya beans supplements to children in ECDE centres.

On the other hand, the national government is supporting schools with the feeding programme, though there has been no supply in the last two terms.

“The children are now under stress and may not concentrate in school which may eventually affect their performance," Mustafa said.

"I appeal to the government to hasten the release of the school feeding programme.”

He added that NDMA has identified about 12 schools where they are paying school fees for about 480 students through the feed-for-fees initiative.

Mustafa said selection is done through the county education team with support from the county steering group and 40 students from poor households are selected for each of the secondary schools.

“In the fee-for-food initiative, we buy food from the market using our resources and then through the steering committee.  Needy schools  or students are selected from the most affected subcounties," he said.

"The food is converted to school fees. We have also been supporting the health and nutrition department to carry out mass screening of under-five children.”

Unicef, in partnership with the department of Children Services, is also implementing the Nutrition Improvement for Children through Health Education programme.

NDMA is receiving cash transfer, through the partnership, to support pregnant women and lactating mothers.

Each of the women receives Sh500, while some who are lactating and pregnant at the same time receive Sh1,000.

According to a report by the UN (Office for the Coordination of Humanitarian Affairs), the nutrition situation is critical in Garissa, Wajir, Mandera, Samburu and Turkana.

Other areas are North Horr and Laisamis subcounties in Marsabit county and Tiaty in Baringo county.

The UN said that more 465,200 children under five and more than 93,300 pregnant or lactating women are acutely malnourished in the Asal region.

“Worryingly, acute malnutrition has surpassed the emergency threshold in many areas, affecting between 15 per cent and 30 per cent of children in at least eight counties,” the report said.

“This is coupled with underlying issues such as poverty, high illiteracy, and poor infrastructure across pastoral areas,” the report said.

Mustafa said four season have failed and NDMA projects that if the rains fail, the number of people in need of food aid in the county will increase from the current 160,900 to 200,000 in January.

This is almost half of the population of Marsabit which is at 459,700.

“We are heading to a bad situation and this has been complicated by the climate change effects. The seasons are reducing and the rains are becoming unpredictable hence not able to support livelihoods," Mustafa said.

He appealed to the affected counties to put on hold big developments and focus on saving lives and livelihoods.

“Redirect resources to support human lives and let us leverage on the resources available to avoid duplication and wastage," he said.

"I also urge leaders to embrace peace so that we can fight drought instead of creating other challenges such as conflicts within ourselves."

At least 2,800 children under the age of five suffer from nutrition deficiency.
Counties
1 week ago
by AGATHA NGOTHO and ALPHONCE GARI
News
24 November 2021 - 23:00