Kenya ranked 31st most vulnerable despite contributing marginally to emissions 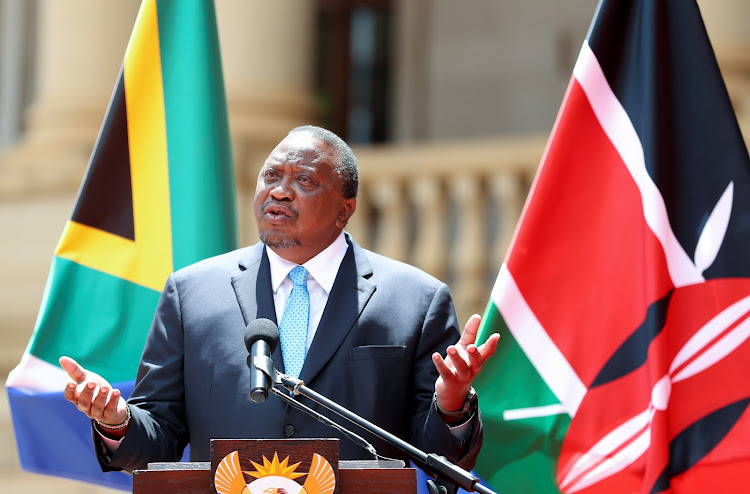 The head of state called for urgent mitigation measures to contain the fast-spreading effects with potential to affect the country’s social-economic development.

Uhuru was addressing the ongoing 7th Devolution Conference via a video link from South Africa on Wednesday.

“Climate change is not a future problem but a present and serious threat to all countries across the world,” Uhuru said.

According to the President, Kenya is ranked 31st most vulnerable to effects of climate change despite contributing marginally to greenhouse gas emissions.

“Climate change poses an existential threat to Kenya even though our role in precipitating the problem is negligible - we contribute less than one per cent of current global greenhouse gas emissions.”

Kenya losses about three per cent of its Gross Domestic Product every year due to climate change impacts.

To address the already bad situation, he said, counties should develop more robust and focused execution of mitigation and adaptation strategies.

“As we meet here today, about 2.5 million people in 23 counties, are facing famine because of drought,” the President added.

The President spoke when he officially opened the last Devolution Conference being held at Makueni county.

This year's theme is ‘Multi-level Governance for Climate Action: Sub National Mobilisation in Unlocking the Full Potential of Climate Action after pandemics.

Speaking at the same function, ODM boss called for creation of National Climate Council as a mitigating measure to tackle the phenomenon he described as a matter of life and death.

The opposition chief said climate change is a global threat which must be addressed as a matter of priority.

“Climate change is bigger than the election in 2022. It is a life and death matter. Climate is so important that going forward we need a National Climate Council and situate it within the presidency,” he said.

He rooted for an urgent action to check the situation that he said is quickly getting out of hand.

“Kenya is experiencing higher temperatures, unpredictable rainfall, extreme weather, rising water levels, reduced crop and animal production. If we do not tackle climate change all our efforts to grow our economy will be in vain,” Raila said.

He further called on counties to set up Funds and policy framework to address the rising temperatures.

So far, 33 counties have enacted climate change policy and legal frameworks while the remaining 14 are at different stages of adoption.

“I laud ASAL counties- Garissa, Isiolo, Kitui, Makueni and Wajir- which have gone ahead and established County Climate Change Funds,” he said.

The CS said at least two million Kenyans are suffering the effects of global warming insisting a political goodwill is a major step in winning the war.

“We need to mainstream climate change in our political discussions. I am yet to hear anything at all on climate change from the presidential aspirants,” Tobiko said.

Matiang’i called for increased funding to combat the new challenges.