Suspect handed cashier note directing her to insert Sh1,000 notes only in envelop. 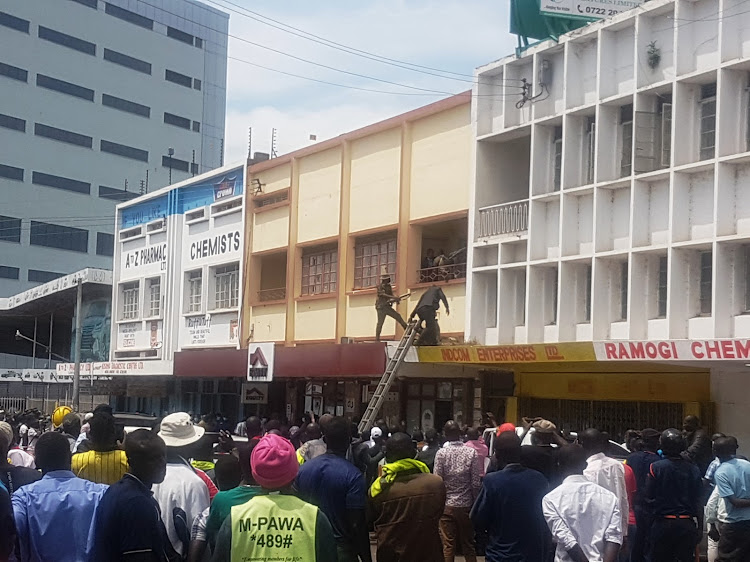 NO ARRESTS: KIsumu's Equity Bank on Angawa Street where there was a foiled robbery attempt on Monday.
Image: MAURICE ALAL

Police in Kisumu have released 18 people who were rounded up on Monday following the foiled robbery attempt on Equity Bank's Ang'awa Street branch.

Fourteen of those set free were bank staff. Four others were customers, including a university lecturer.

Kisumu county criminal investigations officer Francis Wanjau said they all recorded statements and will report to the station whenever required.

Wanjau said they are retaining their phones for further investigations.

So far, nobody has been arrested.

Staffers and customers questioned by police.
InPictures
1 week ago

In the banking hall CCTV footage, one of the suspects is seen talking to a cashier.

The suspect handed an envelope which had a note directing her to insert Sh1,000 notes only.

A note was also handed saying, "There are four robbers in the bank armed with guns, grenades and knives."

The same suspect is seen throwing a tear gas canister and removing a cap and shirt before leaving.

On the camera at the entrance, the suspect is seen signalling using his hands. He escaped towards Stanbic Bank on Oginga Odinga Street.

The note is with the Kisumu Central subcounty DCI David Sichangi who is handling the case.

Equity Bank on Tuesday said, “We had an accident where armed robbers gained access into the banking hall of our Kisumu Angawa branch.”

It said no cash was lost.

Members of the public have questioned efforts by the police in ending the operation.

The incident happened at about 11.30am and lasted more than three hours.

A teargas canister was thrown at the facility, causing fear and commotion among customers.
Counties
1 week ago
by MAURICE ALAL Correspondent, Nyanza Region
News
24 November 2021 - 16:19