He will make stops in Narok, Kericho, Nandi, Uasin Gishu, Nakuru and Nyandarua. 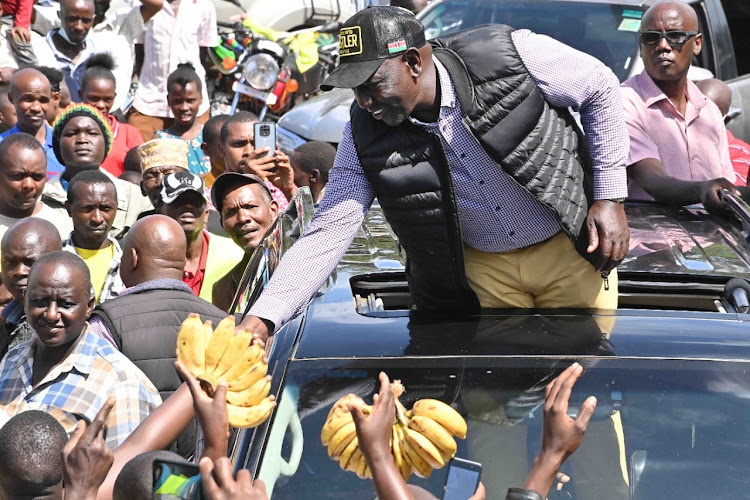 Deputy President William Ruto will on Monday start a five-day tour of Rift Valley on a blitz to popularise his bottom-up economic model and rally the region behind the United Democratic Alliance.

On Monday, the DP is expected in Narok county for a series of functions and on Tuesday he will be in Belgut, Kericho county, where he will traverse the constituency conducting youth and women's empowerment programmes.

On Wednesday, he will start his day in Nandi county and later attend an interdenominational church function in his home county of Uasin Gishu.

On Thursday, the Deputy President will pitch tent in Nakuru county and on Friday take his campaigns to Nyandarua.

He will be back to Kwale county on Saturday.

On Sunday, a section of leaders allied to Ruto said Kenyans will not be swayed by state machinery pushing the candidature of ODM leader Raila Odinga.

They said state-sponsored opinion polls meant to falsely portray the ODM boss as a formidable candidate will not have a bearing on next year's elections.

The MPs spoke in Maragua, Murang'a county, where they addressed residents in the company of the Deputy President and area MP Mary Wa Maua.

They said Raila’s financiers were in for a rude shock as Kenyans will make independent choices devoid of external influence.

Duale appealed to President Uhuru Kenyatta not to impose the former Prime Minister on Kenyans, saying his ugly traits were well known to the people.

"We have a lot of respect for President Kenyatta, however, we will not allow him to push us to back Mr Odinga. We know Raila, his history and violent dispensation,” he said.

Duale said Raila's backers were now using fake opinion polls to inflate his dismissal popularity in Mt Kenya and the rest of the country.

"The system has started rolling out fake and unscientific opinion polls whose main aim is to show that Raila has some presence in Mt Kenya. But the reality is different,” he said.

Nyoro said Kenyans will shock Raila's backers pushing fake polls, noting that Ruto's popularity will not be affected by the fake polls.

"William Ruto enjoys the support of over 60 per cent of Kenyans countrywide,” he said.

Nyoro said it was pointless for Jubilee Party officials to threaten to kick out members yet the party had already disintegrated.

He said: "Jubilee Party collapsed. We have since moved on to UDA, a solid political party that will unite all Kenyans."

Ichung'wah said state officials and some businessmen were sponsoring inaccurate opinion polls meant to mislead Kenyans on Ruto's popularity compared to that of Raila.

"I want to assure you that where I come from, Kiambu county,  Ruto enjoys 100 per cent support of the residents,” he said.

Gachagua said manufactured polls will not change the country's political euphoria over UDA and its bottom-up economic model.

He said, “You cannot change the perception that UDA is Kenyans' party of choice."

Osoro said Raila has lost ground especially in Kisii and Nyamira counties where ODM lost parliamentary seats to Jubilee and other parties.

Former Kiambu governor Waititu said Raila was a hypocrite who claims to support the fight against corruption yet those leading his campaign were corrupt individuals.

Baya said Raila had derailed Coast region's development, a situation that has left the people living in abject poverty.

"As the people of the Coast we are fed up with Raila. If you allow him to rule, he will impoverish Mt Kenya and the country as he did at the Coast,” he said.

Wa Maua said she would continue working with and listening to the people of Maragua ahead of the 2022 general election.

"My responsibility is to listen to and walk with the people of Maragua who elected me, especially because I will be coming back next year," she said.

The DP assured Kenyans that once elected he will complete derailed government projects that were shoved aside in the wake of the handshake between Uhuru and Raila in 2018.

Ruto said he will focus on programmes and projects that will create jobs for the unemployed.

He said unemployment was a serious crisis that has taken a toll on youth who have completed their post-secondary school education but can't secure jobs or income-generating businesses.

He said: "It is the responsibility of the next government to put in place deliberate policies and programmes that will create millions of jobs and boost small businesses so that young people are not lost to alcoholism, drugs, crime and depression."

The Deputy President said it was regrettable that over 14 million have been blacklisted by the Credit Reference Bureau.

"Kenya cannot move forward if 14 million Kenyans are locked out of the economy,” he said.

The Deputy President urged Kenyans to shun tribal politics and embrace national political parties that will unite the country.