•Head of Public Service Joseph Kinyua had earlier classified all civil servants schemes as State Corporation, effectively putting them under State control and on the radar of the Treasury.

•In a letter to Kinyua dated August 16, Kihara said Laptrust, CPF and related entities are public entities that cannot be classified as state corporations under the State Corporations Act. 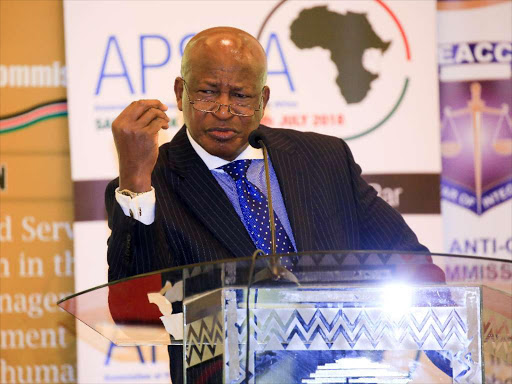 Attorney General Paul Kihara has cleared the way for the operationalisation of a new pension scheme for civil servants that has been in the pipeline since 2012.

The AG has stopped attempts by the National Treasury to seize control of more than Sh60 billion pension funds for county workers.

Head of Public Service Joseph Kinyua had earlier classified all civil servants schemes as State Corporation, putting them under State control and on the radar of the Treasury that has been raiding parastatals for funds.

In a letter to Kinyua dated August 16, Kihara said Laptrust, CPF and related entities are public entities that cannot be classified as state corporations under the State Corporations Act.

The letter titled Outcome of the Consultative Meeting on the Management of Pension Funds is copied to Treasury CS Ukur Yatani and the then Devolution CS Eugene Wamalwa.

It further states pension schemes to other entities which are defined under the Public Procurement and Asset Disposal Acts as public entities which are not state corporations, such as the Judiciary, Courts, Commissions and Constituencies.

The AG’s opinion will unlock the establishment of a contributory public service pension scheme – the Public Service Superannuation scheme.

The mandatory retirement savings plan will see members contribute to the scheme, unlike the current scheme where the pensions are paid directly from the exchequer.

The new scheme has not been operationalised despite enabling legislation, Public Service Superannuation Scheme (PSSS) Act being in place since 2012.

While various service providers had already been identified, the scheme has not fully commenced operations due to the confrontation over the classification of the scheme.

NCBA, Stanbic and Coop Bank were identified as the funds' custodian and CPF Financial as the scheme administrators.

The scheme is expected to have at least 350,000 members contributing about Sh26 billion annually.

The Council of Governors had in August opposed the listing of Laptrust and CPF under the control of the broke National Treasury that has been raiding State Corporations of surpluses to finance the budget.

By end of the second quarter of the financial year 2020-21, Treasury had managed to collect over Sh100 billion from regulatory authorities as the government engages in overdrive gear to raid the coffers of State entities to fund its programmes.

He accused the state of always encroaching on their mandate whenever huge money is involved.

On Sunday, COG said the tussle to control the county pension funds is being fueled by certain parties within the government out to frustrate the due process and the independence of the newly operationalized PSSS.

“It remains to be seen how long the scheme will operate without the requisite service providers,” they said in a statement.

“The government seems to be going back on its intention of establishing the Retirement Benefits Authority, back in 1997, with one key objective being to separate Pension funds from interference by both the Employer and the Government.”

This will be the second time, devolved units will have successfully thwarted a similar scheme when they opposed a bill that gave the national government power to manage county employees' retirement benefits, which is against the Constitution.

The Governments Retirement Scheme Bill, 2018 gave county governments a peripheral role in the management of the pension scheme, while allowing the national government to take control.

According to a letter dated July 16, by the Head of Public Service to various entities, the government declared Laptrust and county pension fund as state schemes following a legal advisory by the AG.

“This follows the legal opinion of the Attorney General that affirms that all pension and provident funds are public entities,” Kinyua’s letter read in part.

Kinyua directed Treasury to bring Laptrust and all its affiliate or subsidiary entities to compliance with the PFM Act, PPAD Act and the Public Audit Act.

According to the letter, the schemes are required to submit their budgets and comply with the Treasury’s guidelines on bank accounts, surpluses, borrowings and expenditure.

“The National Treasury to ensure that a special audit by the Kenya National Audit Office to ascertain the current financial position of Laptrust and affiliate or subsidiary entities and guiding on future,” Kinyua said.

In a letter to Kinyua dated August 9 and copied to CS Yatani, CoG boss Martin Wambora faulted the classification of the pension schemes as state corporations.

“You will note that the Laptrust scheme, county pension fund and related entities are not state corporations within the meaning assigned to it under the State Corporations Act, cap 446,” Wambora said.

“The Laptrust DB scheme, the county pension fund and related entities are except entities under section 2 of the State Corporations Act since they are unincorporated and fall under the Local Government Act and the national government does not hold any shareholding in the two schemes.”