•The report said that much of the pressure to privatise healthcare in Kenya has come from external actors in the global North. 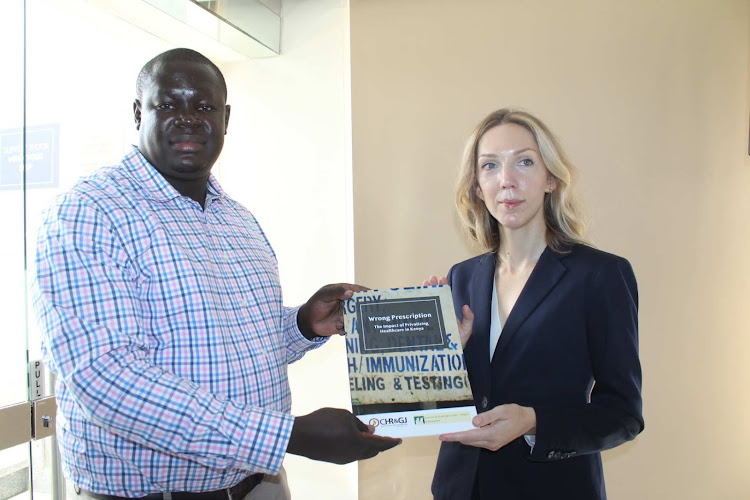 The new report by Hakijamii and the Center for Human Rights and Global Justice at New York University on healthcare privatization in Kenya titled “Wrong Prescription: The Impact of Privatizing Healthcare in Kenya,” during its launch at Hurlingham, Nairobi on November 17, 2021
Image: ANDREW KASUKU

Kenyan healthcare is increasingly going private, according to a new report that suggests that private facilities now control 52 per cent of the market.

While some may favour this approach for its perceived better quality and efficiency, the report suggests it has exacerbated inequity and is undermining the right to health in Kenya.

The 49-page report, “Wrong Prescription: The Impact of Privatising Healthcare in Kenya,” is authored by local human rights lobby Haki Jamii and the Center for Human Rights and Global Justice at New York University.

It was launched in Nairobi on Wednesday.

“Proponents of private healthcare make all sorts of promises about how it will lower costs and improve access, but our research finds private actors have really failed to deliver,” said Philip Alston, former United Nations Special Rapporteur and co-author of the report.

“While many associate private care with high-quality facilities, the ‘haves’ and ‘have nots’ experience entirely different private sectors,” said Orago, a co-author who also launched the report.

He added: “Private healthcare has been disastrous for poor and vulnerable communities, who are left with low-quality, low-cost providers peddling services that are too often unsafe or even illegal.”

He noted that public facilities now comprise only 48 per cent of all health institutions. For-profits comprise 41 per cent, while eight per cent are faith based and three per cent are run by NGOs.

“So we can effectively say private health facilities control over 52 per cent of the market,” he said.

The report said that much of the pressure to privatise healthcare in Kenya has come from external actors in the global North.

The report concludes that the government should rethink its support for the private sector and prioritize the public healthcare system, which still delivers the majority of inpatient and outpatient care in Kenya despite being starved of resources.

Healthcare is a big business, with global corporations and private equity firms lining up to profit off the sector in Kenya,” said Rebecca Riddell, Co-director of the Human Rights and Privatization Project at CHRGJ and co-author of the report.

“These companies expect returns on their investments, leading to overwhelmingly higher prices in the private sector while scarce public resources prop up private profits.”

The report draws from more than 180 interviews with healthcare users and providers, government officials, and experts.

Researchers said that private sector healthcare workers described having to meet patient “targets” as well as working in conditions significantly inferior to those in the public sector.

“The disconnect between profits and public health goals should cause policymakers to rethink their reliance on the private sector,” said Bassam Khawaja, co-director of the Human Rights and Privatization Project and report co-author. “Many essential health services are incredibly valuable or even lifesaving but may not be profitable as one-off transactions.”