• Kenya was supposed to deliver the first cohort by October 1 as per the information given by the Labour CS Simon Chelugui.

• Chelugui Thursday met with nurses to bring them up to speed on the progress of the recruitment process and create awareness on the whole exercise. 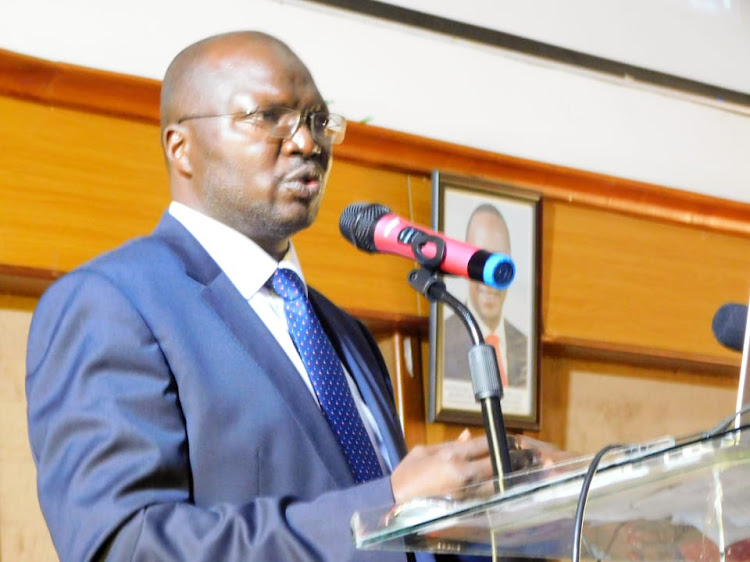 CS Labour, Simon Chelugui speaks during the briefing of the bileteral agreement between the GOK and the UK matters healthcare at the KSG on Nov 18/ ERIC KOKONYA

The earliest the first cohort of Kenyan nurses qualified to work in the UK are expected to leave the country is January 2022.

The Ministry of Labour acknowledged that the tedious processes involved in the recruitment have made it take longer than anticipated.

Kenya was supposed to deliver the first cohort on October 1 as per the information given by Labour Cabinet Secretary Simon Chelugui.

Chelugui Thursday met with nurses to bring them up to speed on the progress of the recruitment and create awareness of the whole exercise.

The delay has also been occasioned by the fact that the exercise involves a lot of other ministries, agencies, and international organisations that will ensure conformity to the laid rules and requirements.

“Given this is a pilot project, we believe once we deliver the first cohort, the rest will fall in place," Chelagui said.

"We are also building a team with many other ministries and other institutions like IOM  and organising and bringing together that team requires a lot of time and I believe we are in the last mile of this process."

According to the CS, 2,500 nurses have been vetted by a multiagency team and found to be qualified, leaving them with three more steps.

Some of the qualifications include confirming that the nurses are not engaged by either the county health facilities, national government facilities, faith-based or private hospitals.

Already, names of the nurses have been circulated to the respective counties and found to be qualified to proceed to the next steps.

“There are three steps remaining before we flag them out. We have to assist them and go through English tests, computer-based tests and medical tests," Chelugui said.

"All the medical tests are done by the International Organisation of Migration.”

Kenya is expected to send at least 20,000 nurses to the UK in a span of three years in an agreement inked between the two countries when President Uhuru Kenyatta visited the UK in July.

The governments of Kenya, the UK and Northern Ireland signed a bilateral agreement on July 29 for collaboration in the healthcare workforce.

The deal allows Kenyan healthcare professionals to work in the National Health Service of the UK.

“The exams are on a schedule it is not offered on a daily basis, we have 2,500 qualified nurses whom we have vetted and processed we are have encouraged them to take the nearest exam so if they took the ones in December and the results are out we can now process their medical and travel documents in January.”

The nurses will earn up to Sh321, 499 upon signing the contract with the UK National Health Service (NHS).

According to Chelugui, the nurses will also be given three-month free accommodation on arrival for the three-year contract, which is renewable for another three years.

The UK government will also foot air tickets for those departing. They will be eligible to pay progression, overtime, leave entitlements and can relocate their families after three months.