Uhuru may back you but Mt Kenya won't, DP allies tell Raila 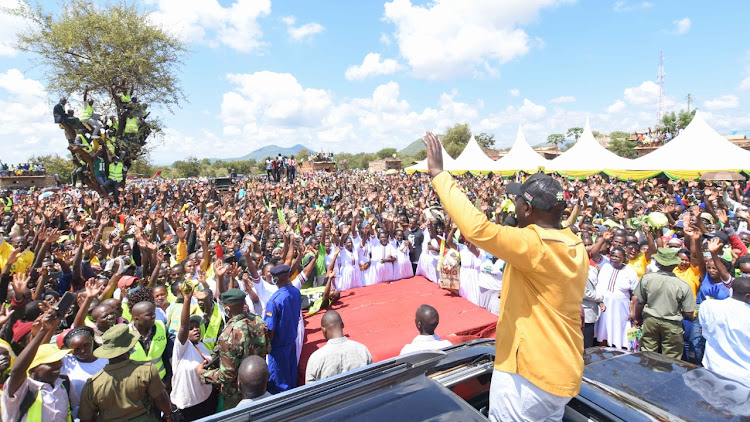 Mt Kenya leaders allied to Deputy President William Ruto have said the region will not support Raila Odinga for President in 2022.

They said they will neither be intimidated nor coerced into changing their political choice.

The leaders said even if President Uhuru Kenyatta is backing Raila, the region will not.

They said Mt Kenya was behind Ruto as the fifth President.

The leaders were speaking on Wednesday in the company of the Deputy President during the empowerment of small traders in Tharaka Nithi.

Prof Kindiki claimed President Kenyatta had lied to and betrayed the people of Mt Kenya.

“We failed to remain on the path that was meant to uplift millions of Kenyans,” he said.

The Tharaka Nithi Senator regretted that the Jubilee government, that had promised to make friendly the country’s investment environment, had failed.

“Instead, what we are seeing today are punitive measures that are killing enterprises. This must be stopped by voting in a progressive leader,” he said.

He added, "even if the so-called deep state continues to campaign for Raila, Mt Kenya will not change its stand on rallying behind the Deputy President."

Murugara said it was only UDA, that is associated with Ruto, that will transform Kenya.

“If you are not with UDA, then you are part of our country’s problems,” he said.

Nkatha assured Ruto that Tharaka Nithi was behind him.

Meanwhile, the Deputy President who is on a week-long development tour of Mt Kenya region, asked Kenyans not to accept to be divided into small regional political parties.

“It is these regional outfits that breed ethnicity and division in our country,” he said.

Ruto asked Mt Kenya to rally behind UDA whose progressive agenda is anchored on the bottom-up economic model.