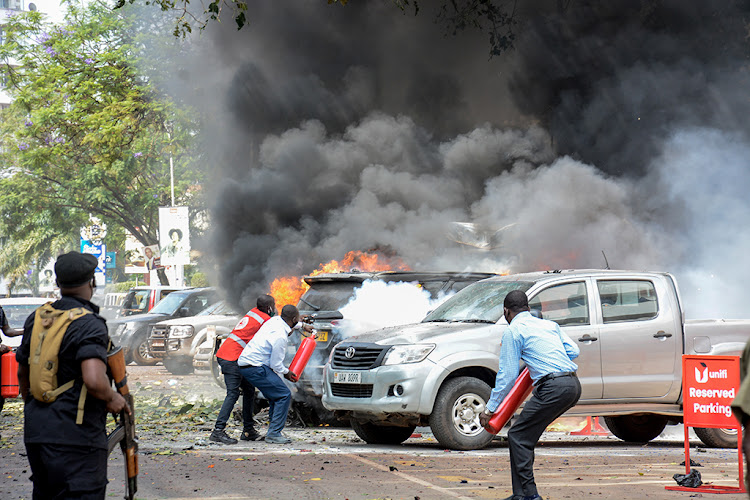 At least six people were killed  and hundreds injured in the Ugandan capital.

One blast was near Parliament, the other near the Central police station.

“We are alert at the border in case those behind the incident try to flee here. Locally, we are also on alert in case of any planned incident,” he said on the phone.

While we're on high alert to safeguard residents and properties, we encourage the public to be watchful of any suspicious persons and activities within their neighbourhoods and report them

Kenyan authorities have also activated intelligence agencies to check on their contacts on the threat level.

Police 'checked on the activities' of known Kenyan cells to establish the level of threat, officials said.

Shioso said they had activated security at installations across the country and heightened security within urban areas and along borders.

“While we remain on high alert to safeguard residents and their properties, we encourage the public to be watchful of any suspicious persons and activities within their neighbourhoods and report the same,” he said.

In the first blast, CCTV footage shows a man with a black bag detonating himself while the second one was carried out by two suicide bombers on motorcycles.

In the first blast, CCTV footage shows a man with a black bag detonating himself while the second one was carried out by two suicide bombers on motorcycles. 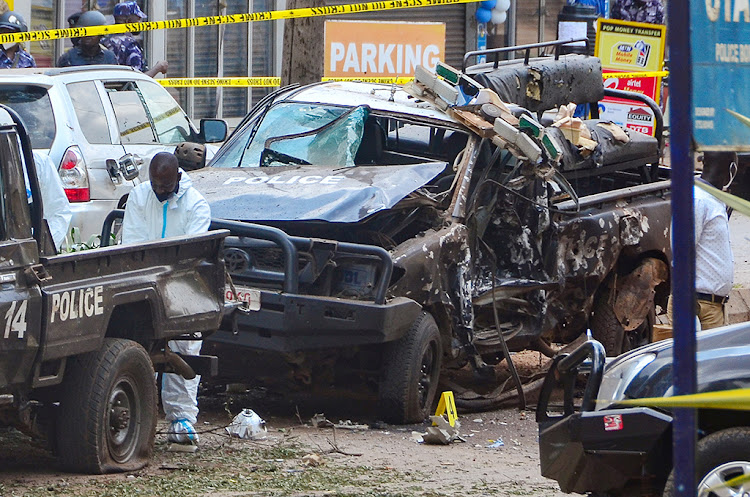 The explosions happened three minutes apart, between 10:03am and 10:06am.

Uganda  police said preliminary findings had shown the Allied Democratic Forces could be behind the attack. They are Ugandan rebels working with IS in DR Congo.

The group has been staging attacks there, prompting neighbouring countries to send troops there to fight the terrorists.

Some of the injured are in critical condition, Ugandan commissioner of police and spokesperson Fred Enanga said.

The attack comes exactly a month after UK government warned Uganda of a possible terror attack.

In a statement issued on October 14, the UK urged its nationals to be vigilant but this was downplayed by Ugandan authorities who had said there is no need of elevating threat levels.

In Nairobi, police sought to assure Kenyans of security but urged continuous vigilance.

The warning is based on past incidents where attacks in Uganda were followed by attacks in Nairobi.

Interior Cabinet Secretary Fred Matiang’i said security and intelligence agencies were on alert and urged Kenyans not to panic.

He commented as he visited Kamiti Maximum Security Prison where three terrorists escaped on Monday morning at 1am under mysterious circumstances.

Matiang'i said there is no need to panic over the escape of prisoners termed armed and dangerous. He said security teams were on high alert and had managed to pre-empt many of the planned terror attacks.

Terror threats were among the issues discussed last Friday during a National Security Council meeting chaired by President Uhuru Kenyatta at State House.

The meeting was informed by many types of threats coming through various channels but security agencies have managed to diffuse them.

The President called for heightened vigilance and surveillance by security agencies given the unfolding violence in the region, notably Uganda, Ethiopia, Somalia and DR Congo.

The operations have been heightened in parts of Nairobi, Isiolo, Kwale, Mombasa, Lamu and the northern part of the country where terror cells are active.

Most of these cells are being run by returnees from Somalia. Most of those who plan attacks have been to Somalia where they joined al Shabaab militants. Some were radicalised in Kenya.

When they come back, some pretend to have reformed, only to receive orders from their masters to launch attacks. Security agencies following returnees and cells usually preempt the attacks.

Some human rights activists have complained of abuses in the efforts to counter terror and extreme radicalisation. 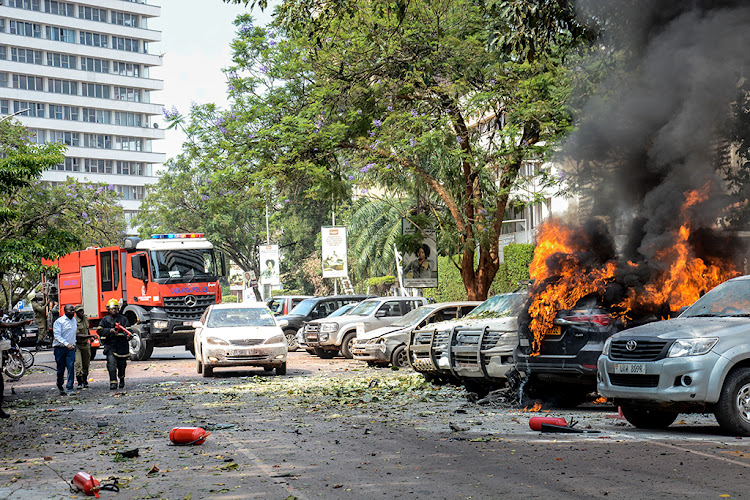 Dozens of militants are in jail following their arrests over botched or preempted attacks.

Seven warders at the Kamiti Prison arrested on Monday in connection with escapes of the convicts serving terms for terrorism-related crimes.

Matiangi said preliminary investigations suggested the escape from arguably the most secured maximum prison facility in the country was abetted by laxity and incompetence.

He pledged that more arrests and prosecutions will follow after the DCI moved in to investigate the prison break.

The state has put a Sh60 million bounty on the three terrorists.
News
2 weeks ago

The DCI placed a Sh20 million bounty on each of their heads, a total of Sh60 for their capture.

“We will not only go the direction investigations will point us but we will also act resolutely to ensure this kind of recklessness does not happen again because it exposes our people. Definitely, there is a certain level of irresponsibility we have to deal with in this particular case," Matiang'i said.

Matiang'i revealed their extensive tour of Kamiti including Block A6 where the trio had been held did not appear to support the official version of escape given by the prisons’ managers.

“We have gone to the place where the escape allegedly happened, and we have formed certain opinions. We don’t want to discuss that because we don’t want to interfere with the work the DCI is doing,” he said.

He said the government will protect whistleblowers who volunteer information that could lead to rearresting the dangerous prisoners.

WARDERS TO BE CHARGED

Warders were grilled on Tuesday at DCI headquarters for most of the day ahead of expected arraignment on Wednesday. They are expected to be charged with abetting escape from lawful custody

The manhunt teams are paying special attention to the country's borders and exit points.

Warders were grilled on Tuesday at DCI headquarters for most of the day ahead of expected arraignment on Wednesday. They are expected to be charged with abetting escape from lawful custody.

Kinoti spent Tuesday at Kamiti inspecting the facility before he left, concluding a possible abetting of the escape.

This comes in the wake of ramped up operations over terror fears in the country.

Police say they are also looking for an ex-terror convict Elgiva Bwire who has been missing since October 28 when he was released from Kamiti. He was a cellmate of the three men who escaped.

Abikar was charged and convicted in 2019 over his links to al Shabaab and for abetting the Garissa University College attack of April 2015 that left 148 people dead.

Odhiambo was arrested in 2019 for trying to join the Somali terror group.

Akhulunga was arrested in 2012 over a foiled attack on Kenya’s Parliament and charged with possessing explosives, ammunition and firearms.

How terror suspect offered Sh180,000 to cop over details on popular Lang'ata club