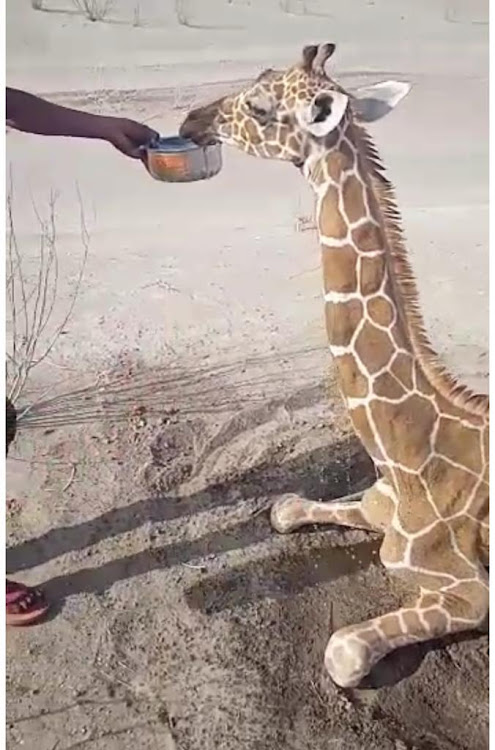 Over 4,000 giraffes in Garissa county risk being wiped out because of the effects of the biting drought.

"Domesticated animals were being assisted but not wildlife, and now they are suffering," he said.

The first ever national census report showed that the county hosts 4,830 giraffes.

Ali said the situation worsened because many people are doing farming activities along the rivers, blocking wildlife such as giraffes from assessing water.

Ali said there is an urgent need to identify and open up areas that wildlife was using to access water. 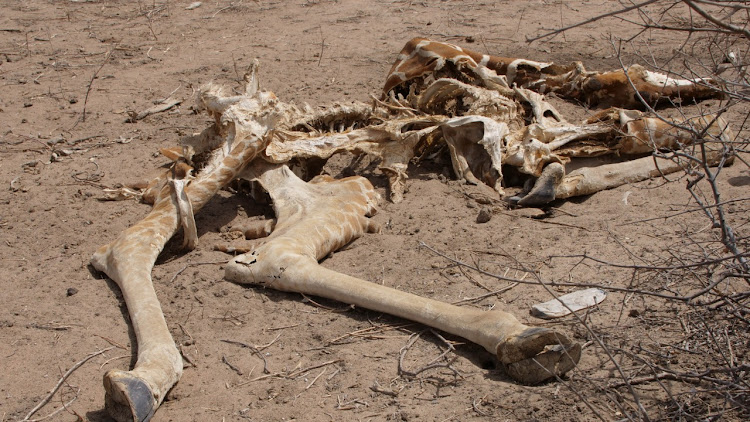 A carcase of a giraffe. Image:HANDOUT.

On Tuesday, Wildlife Principal Secretary Fred Segor told the Star that the government was still discussing how to address the drought.

He said the most affected areas in Northern Kenya are set to be given priority by deploying water bowsers to assist the wildlife.

"We are almost finalising the support we get from the government," he said.

Segor said the government has not officially received the data of wildlife that have died as a consequence of the drought.

"The field officers are still working on it and we will able to tell you as soon as possible."

Segor said subdivision of land in the protected areas is not allowed by law as the land belongs to the government.

The drought situation in the arid and semi-arid counties in Kenya continues to deteriorate.

Both seasons were characterised by late onsets, below-average cumulative quantities, and poor distribution in time and space, resulting in extreme water shortage and migration of pastoral communities.

Another effect was the widespread reliance on water trucking.

In some conservancies in Garissa, wildlife are dropping dead and there’s an increase in human-wildlife conflict.

This is because of an influx of livestock in national parks and reserves and wildlife migrating from protected areas to community lands to access water and pasture.

With the movement of livestock and wildlife to the insufficient water points limited, there is likelihood of local tensions that could trigger further inter-communal and human-wildlife conflicts.

He further instructed the National Treasury and the Ministry of Interior to spearhead government efforts to assist the affected households, including water and relief food distribution and livestock uptake.

The weatherman has said the expected heavy rains will probably not come.

“We are now in a drought situation. And it is not just in Kenya but it’s affecting most of East Africa,” he told the Star.

“This condition will continue until the end of the year. You will have occasional storms which will disappear. It will not change much.”

He said in August, the department issued the October-December seasonal forecast, clearly indicating there was going to be extremely low rainfall in the eastern parts of Kenya and drastically reduced rain in Western Kenya.

“This is what we’re seeing now,” he said.

Kenya is home to three species of giraffe, which include the Maasai giraffe, Reticulated giraffe and the Nubian giraffe.

According to the first-ever national wildlife census that was released in August, the total population of giraffes is 34,240 animals.

Reticulated giraffes have been observed in the North Eastern counties of Wajir, Garissa, Mandera, Turkana, including Laikipia, Samburu, Lamu and Tana River.

Other places where the giraffes have been sighted include Mwea National Reserve in Embu county and Nasalot and Kerio Valley in Baringo/Elgeyo Marakwet counties.

Within captive facilities, a substantial population of 47 individuals of all species is conserved in different private facilities in Kenya.

The key stronghold for Masai giraffe is Amboseli (6,425)and Tsavo ecosystem (4,314) while Reticulated giraffe is mostly found in Wajir, Garissa and Lamu counties.

Over 56.7 per cent (550) of the Nubian giraffes in Kenya were observed in Ruma National Park.

In Garissa, the drought is reported to have killed scores of wildlife, including giraffes.

The Conservation Alliance of Kenya has initiated a fundraiser to help communities get pasture and water as long term solutions are awaited.

CAK is an umbrella organisation of more than 50 NGOs in Kenya advancing the preservation, protection and management of wildlife and its habitats.

Donations can be made through M-changa at this link  https://secure.changa.co.ke/myweb/share/50692.

"Depending on the availability of funds, we will then move to other counties affected by drought," he said.

Itela said the interventions put by the government following the declaration of drought as a national disaster is not enough to salvage the current adversity facing people, livestock and wildlife.

He said the situation in Garissa and Wajir is dire because of the number of wildlife that has died, adding that there is an immediate need for pasture and water.

In collaboration with stakeholders, CAK plans to purchase hay and open water points for wildlife and livestock.

Itela said 100 per cent of the donations will be used for drought emergency response.

Data reveals that drought-resistant species such as grants gazelle, gerenuk, giraffe and grevy’s zebra, and grazers such as burchell's zebra, buffalo and wildebeest easily succumb to drought.

Wildlife also migrates out of their range, dispersing widely, thus making them susceptible to poaching.

Other counties are Tana River, Makueni, Lamu, and Samburu, Kitui, Isiolo and Laikipia. 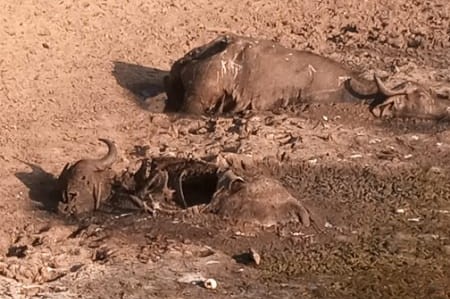