Governor says institution is overcharging them over the recent dormitory fire

• Oparanya cautions students against destroying school property, adding that parents end up being punished through footing the cost of repair or rebuilding. 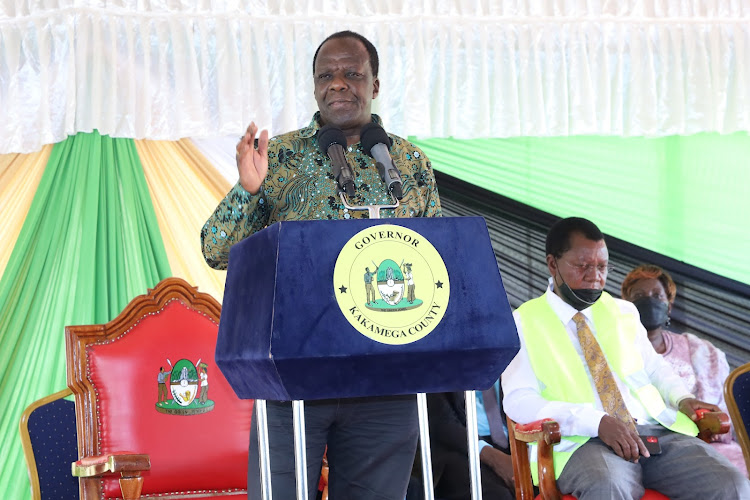 Kakamega Governor Wycliffe Oparanya during the launching of construction of the Kakamega Gold Refinery at Litambitsa in Ikolomani subcounty
Image: HILTON OTENYO

Kakamega Governor Wycliffe Oparanya has criticised the penalty imposed by Kakamega School on parents over a recent fire that destroyed two dormitories.

Speaking in Matungu during a public participation forum on Saturday, Oparanya said Kakamega School was wrongly punishing parents by overcharging them.

Each parent is expected to pay Sh9,823 when their children report back to school.

"The school has 2,200 students, this means they will raise about Sh21.6 million, which is enough to set up more dormitories. The school management should listen to parents and review the charges," Oparanya said.

In a memo dated November 11, the school estimated the cost of rebuilding the burnt infrastructure at Sh12.1 million, cost of double-decker beds at Sh4.1 million, CCTV installation at Sh695,000 and damaged items for 560 students at Sh4.5 million.

Oparanya advised principals to use public works officers to assess damages to determine how much money would be required for repairs.

"Use open tenders and bill of quantities in the entire exercise to show openness," the county chief said.

"Parents have complained of exploitation by principals and BoMs in schools that have been affected by fire incidents. The Ministry of Education should intervene and save parents from these financial burdens."

The governor was concerned that out of the cases reported in the country, most of them were from the Western region. He cautioned students against destroying school property, adding that parents end up being punished through footing repair or reconstruction costs.

"When you burn down structures in schools, you punish your parents because they will pay for repairs,” he added.

The governor further dismissed claims that he has neglected some areas of the county in the distribution of development projects.

"Some leaders have started a narrative that is aimed at dividing the county into zones. I have never advocated divisive politics in my leadership and you should ignore such people," he said.

The governor reiterated the need for the government to relinquish its shares in the collapsed Mumias Sugar Company and any other state-owned mills to the private sector to boost efforts to revive them.

"I ask President Uhuru Kenyatta to intervene and have Mumias Sugar revived because our efforts to pump life into the mill have been frustrated by sugar barons," he said.

The governor, executives and chief officers used the meeting to highlight development projects that his administration has initiated.

In agriculture, the county has spent more than Sh223 million on programmes in Matungu, according to agriculture chief officer Jeremiah Namunyu.

The governor asked residents to support Deputy Governor Philip Kutima in his bid to succeed him (Oparanya), saying he had worked well with him for the period he had been in office.

He asked Kutima to go to the people and sell his agenda.

"The county under Governor Oparanya has done a lot. We have transformed lives through development," Kutima said.