The DP says those who will violate the rules will be automatically disqualified. 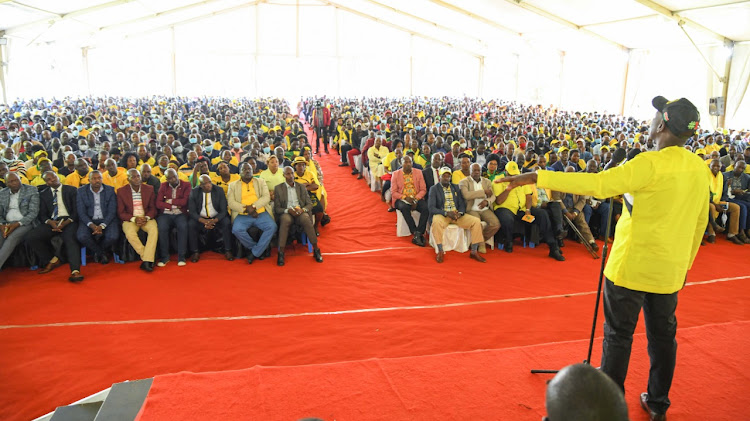 Speaking on Tuesday, Ruto told the aspirants, including sitting governors, MPs and senators that United Democratic Alliance primaries must be free and fair.

The DP spoke to aspirants from 10 counties from his Rift Valley backyard where a ruthless battle for the party's ticket is anticipated.

“UDA will be a violence-free party. Any violent person will exit and look for another party. Violence against women candidates will not be tolerated and will lead to automatic disqualification,” he said.

Ruto said that UDA primaries will be repeated until they get it right in areas where foul play will be detected.

"I see many people struggling to meet me, [but] that won't amount to votes. Go look for votes. What I can assure you is that nominations will be free, fair, democratic and verifiable.”

Ruto spoke to various aspirants at his Karen official residence.

He however appealed to candidates who will be floored in a free and fair  manner not to defect but instead support the winner, saying the next government will be big enough to accommodate all.

“Losing nomination is not the end of the road,” he said

The DP is attracting many aspirants, especially in his  strongholds, a sign that competition will be very stiff in some cases.

UDA has been fighting reports that it has guaranteed some of its members direct tickets.

Ruto also said that the nomination exercise will not be delegated but will be conducted by party officials at designated stations that will be made public.

He recommended for one regional office per county instead of the several parallel ones that have been opened by aspirants running for governor and senate.

The DP said for anybody to be nominated, he or she must have either run and become number two or has made serious verifiable contributions to the party.

People with disabilities will not be charged to participate in the nomination, while youth and women will pay 50 per cent of the nomination fee.

Ruto also used the forum to take the aspirants through the “bottom-up economic model” and his vision for the country should he be elected in the August 9, 2022 presidential contest.

He said under the model, the cost of living will be significantly reduced as more people at the bottom of the pyramid will be empowered economically with higher purchasing power.

The forum brought together aspirants from Kericho, Baringo, Elgeyo Marakwet, Bomet, Uasin Gishu, Samburu and West Pokot counties, in the company of Turkana Governor Josphat Nanok and more than 20 MPs.

Ruto said UDA will leverage the country's abundance of human resource capital, readily made available by the youth, to grow the economy.

The DP said this will be achieved by creating jobs and opportunities for the youth through the implementation of hustler-friendly policies under the bottom-up economic model.

He said they will do away with the dichotomy of formal employment defined by a payslip and informal employment associated with failures and encourage youth to pursue income-generating ventures.

At the same time, Ruto urged leaders from Rift Valley to work together to confront insecurity in the region that he said posed a threat to the region's democracy and economic growth.

Nanok, who is part of the DP's national campaign team, said beneficiaries of the trickle-down economic model were determined to derail the realisation of the bottom-up approach.

The two are walking a tightrope to avert fallouts in their strongholds.
News
9 months ago
by GIDEON KETER Political Reporter
News
09 November 2021 - 17:59