Kenya runs out of HIV test kits for babies

•Currently, there are almost no HIV testing kits while viral load testing has virtually stopped because the country has run out of reagents. 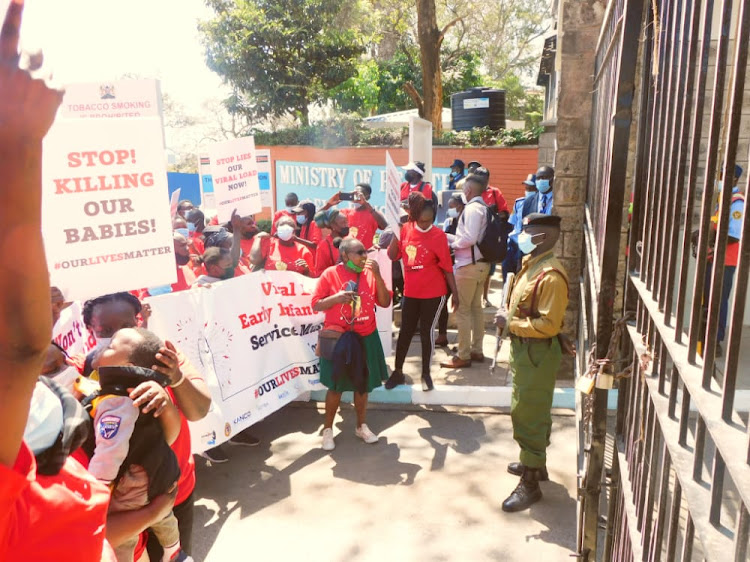 Members of the Network of People Living with HIV protest when they presented a petition to the Ministry of Health on Tuesday
Image: ERICK KOKONYA

Children born to parents living with HIV are not being tested for the virus due to a shortage of test kits in Kenya.

Babies born to HIV-positive mothers must be tested at birth because without treatment, mortality of those who contract HIV is highest in the first three months.

However, many laboratories are still facing a shortage of test kits for babies since March.

People living with HIV yesterday wrote to President Uhuru Kenyatta to intervene, saying petitions to the Ministry of Health and the National Aids and STI Control Programme have been ignored.

"Children are being turned away without tests, resulting in inexcusable and dangerous delays in initiating HIV-positive children onto life-saving treatment," the petitioners said in the letter to the President.

"This is the emergency we are now facing as we approach nearly a year without testing infants and children exposed to HIV."

They also accused the Ministry of Health of introducing a requirement that all children with HIV receive viral load testing before they are put on Dolutegravir, the most powerful ARV on the market today.

"With no viral load test kits available, the circular amounts to a ban on dispensing the life-saving medicines and means children with HIV will suffer unnecessarily."

Nascop director Dr Catherine Ngugi did not respond to requests for response.

Apart from infant test kits, the country is also facing a stock-out for regular tests for adults.

Nelson Otuoma, head of Nephak, the association of people living with HIV, said the country is also facing a shortage of viral load tests, which determine if drugs are working.

This year, the country went through a six-month ARVs stockout after Pepfar refused to distribute donated drugs through the Kenya Medical Supplies Authority.

Speaking in Nairobi in September, head of health promotion Dr Andrew Mulwa defended the government, saying it has over the years increased its spending on HIV.

“I want to assure all that the Ministry of Health instituted various measures to ensure no interruption of treatment and monitoring for people living with HIV on treatment,” he said during the launch of the "undetectable=untransmissible" campaign.

According to a paper by Duke University, Kenya is facing both donor dependency and donor concentration in its health system.

From 2001-2016, donor spending was at least 50 per cent greater than domestic government expenditures on health.

The paper, Development finance in transition: Donor dependency and concentration in Kenya’s health sector, is produced by Duke’s Center for Policy Impact in Global Health.

It suggests Kenya should proactively prepare for transition from donor dependency, even where funding cut is not an immediate reality.

Post a comment
WATCH: The latest videos from the Star
by JOHN MUCHANGI Science Editor
News
10 November 2021 - 06:05
Read The E-Paper