Migwani MCA asks Kalonzo to stop vilifying him over defection

The Wiper leader accused Nguli of being bewitched and disrespectful

• "He should be playing national politics. At that rate the closest he can get to the presidency is through Viusasa or Afrosinema,” the MCA said.

• Nguli insisted that he had made an ideal democratic decision to ship out of Wiper party and did not regret the move. 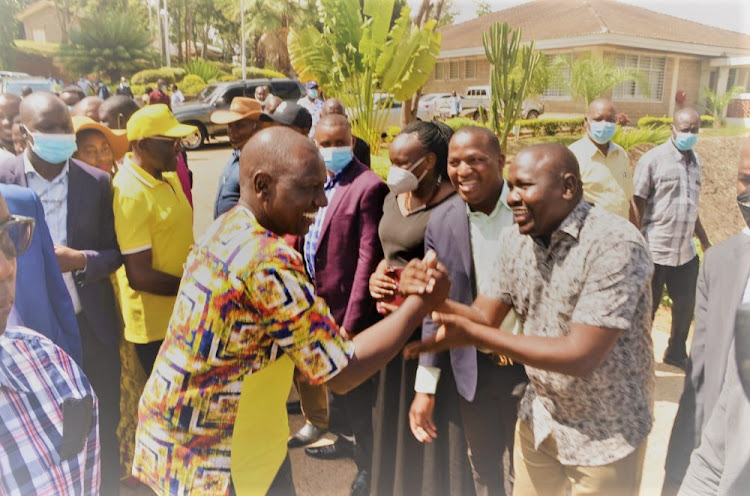 Migwani ward MCA, Philip Nguli has asked Kalonzo to respect him and stop condemning him in public over his defection to DP Ruto's UDA.

Nguli, aka Kalumaita, who recently defected from Kalonzo Musyoka’s Wiper Democratic Party, on Sunday said he was not amused.

This comes as the Wiper leader on Saturday visited the Kisovo area in his turf and publicly proclaimed that a bad spell had been cast on him (MCA) and thus he will never be elected to any position in future.

Speaking on phone Nguli insisted that he had made an ideal democratic decision to ship out of Wiper party and did not regret the move.

He further said he was responding to the wishes of his electorates who are no longer enthusiastic about Kalonzo’s Wiper.

Kalonzo who spoke during a harambee to raise school fees for children of his political buddy, Benard Kilonzi, in the Kisovo area said Nguli’s defection from Wiper was disrespectful to him.

“How dare can Kalumaita run into Ruto’s hands and abandon Kalonzo? He is a bewitched man,” Kalonzo said as the crowd cheered.

He went on to quote the Bible saying; “Paul wondered to the Galatians; who has bewitched you Galatians?”

Kalonzo accused the MCA of blindly abandoning his own.

He wondered  how persons who enjoyed the respect accorded to the Wiper party could do the shocking act of joining Ruto’s bandwagon without consulting with their electorate.

“We are not cursing anyone but such characters will never again be elected to even the lowly grassroots positions of overseeing the roasting of cucumber seeds,” metaphorically said an apparently bitter Kalonzo.

He castigated Nguli on a day the latter had accompanied Ruto who held several meetings to popularise his 2022 presidential bid in Kitui including in Kalonzo’s Mwingi town.

Yesterday, the MCA came out guns blazing to counter the wiper leaders attack. He said the attack was unjustified and if Kalonzo had been offended by his action, he should have summoned him for amicable round talks instead of going public.

“I did not expect Kalonzo to stoop to the level of playing village politics by coming to publicly vilify me in my ward. He is too senior for such politics.

"He should be playing national politics. At that rate the closest he can get to the presidency is through Viusasa or Afrosinema,” the MCA said.

He added that he was surprised that the Wiper leader who proclaims Christianity could associate him (MCA) with being bewitched for exercising his democratic right of association and belonging.

The MCA said since he was a Christian, he would use the bible to counter the bad things said about him by Kalonzo.