Lempurkel sentenced to a year in prison for slapping MP Korere

He has a right of appeal within 14 days

•Senior Principal Magistrate Hellen Onkwani found him guilty of assault and setence him to one year with no alternative to fine.

•“The court has considered that there are many issues of violence in the country and also fact that the accused is a first offender,” she said. 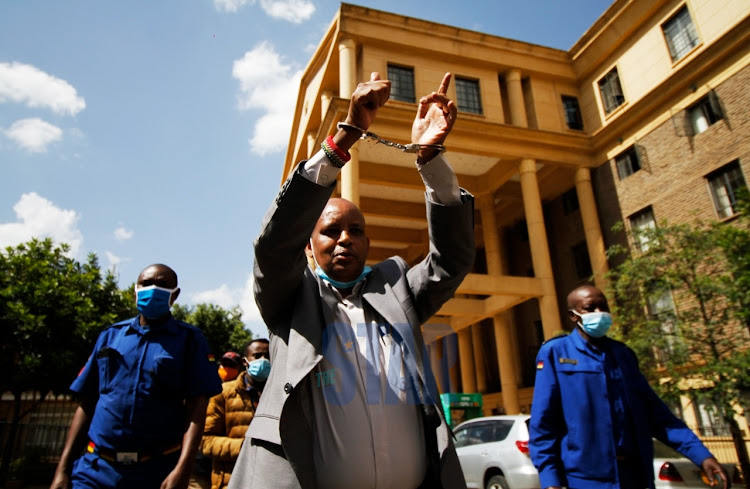 Former Laikipia North MP Mathew Lempurkel being escorted to a police car on November 5, 2021 after being sentenced to 1-year imprisonment without a fine for assaulting the current Laikipia MP Sarah Korere in 2016.
Image: ENOS TECHE

Former MP Matthew Lempurkel has been sentenced to one year imprisonment for slapping MP Sarah Korere in 2016.

Senior Principal Magistrate Hellen Onkwani found him guilty of assault and sentenced him to one year with no alternative to fine.

“The court has considered that there are many issues of violence in the country and also fact that the accused is a first offender,” she said.

“I note from the mitigation record that accused is a leader who needs to be a good example to others so I proceed to sentence the accused person serve one year imprisonment.”

He has a right of appeal within 14 days.

It is alleged that Lempurkel on November 21 2016 at Harambee House in Nairobi willfully and unlawfully assaulted Sarah Korere by slapping her on her left cheek.

He is also said to have kicked her on her lower abdomen causing her actual bodily harm.

In a judgement delivered on Friday morning, Onkwani said the prosecution have discharged its duty of proving its case beyond reasonable doubt and found that the accused person is guilty as charged for offence of assault causing actual bodily harm contrary to section 251 of the penal code.

She dismissed the former legislator’s defense where he said the charges against him were politically motivated ruling that they were an after thought .

"The CCTV was at the corridor but the offence was committed in the boardroom and not in the corridor and such the said CCTV would have been immaterial  consideration of this case" the court said.

Lempurkel had also alleged that he was a victim of assault and both Korere and the former MP were issued with a P3 form however he did not return his or produce any medical records.

Onkwani said on that issue of him being assaulted both parties had been given an opportunity to present their case but Lempurkel did not avail any medical documents to support his claims.

Post a comment
WATCH: The latest videos from the Star
by ANNETTE WAMBULWA Court Reporter
News
05 November 2021 - 10:55
Read The E-Paper