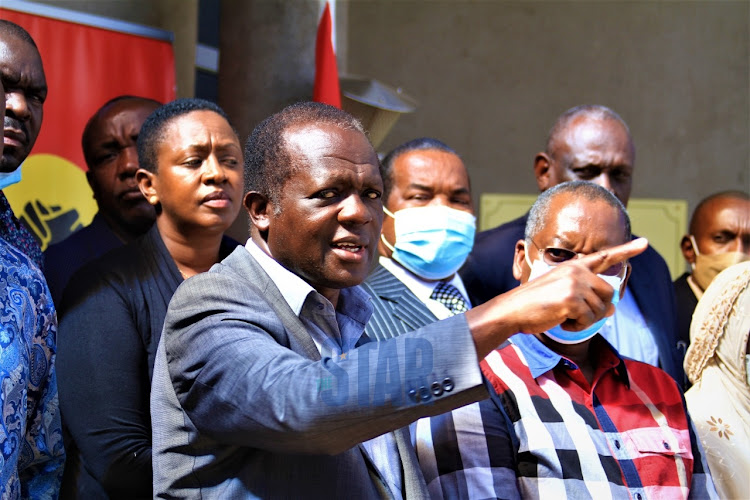 President Uhuru Kenyatta and his handshake partner Raila Odinga have taken charge of coalition negotiations between Jubilee and ODM.

Jubilee secretary general Raphael Tuju on Monday revealed that the talks are now at the level of the two party leaders.

“Our discussions with ODM are ongoing. There are discussions which are being done at the level of the two party leaders,” Tuju said.

“It is beyond my pay grade to divulge something to you which can come up at the level of the two party leaders,” he added.

The coalition talks between the ruling and the opposition parties have been in the works for months and the two leaders sought to escalate their handshake to their parties.

On Monday, Tuju revealed that the party was planning to hold a national delegates conference (NDC) – the party’s top decisionmaking body – that is expected to among others ratify the coalition agreement between the two outfits.

The SG, however, did not divulge the agenda of the meeting, saying the national management committee and the parliamentary leadership were still working on agenda in consultation with the party leader.

“The rule is that we must give a notice of 21 days because out party leader has got a very busy schedule. There will be some comparing of notes, a look at his diary and then we will make a date,” he said.

Tuju addressed a press conference moments after the party’s National Management Committee and Parliamentary leadership concluded a meeting at the Jubilee House headquarters in Nairobi.

The ruling party is set to hold a national delegates conference in November.
News
2 months ago

The meeting, chaired by party national chairman Nelson Dzuya, discussed among others the upcoming NDC meeting.

Although Tuju declined to discuss the agenda of the NDC meeting, the convention comes at a time when the party has been hit with internal wrangles.

A section of the members, including MPs, have been calling for the overhaul of the secretariat as part of rejuvenating the ruling party that has been hit by an exodus of members.

“It is very important to appreciate that this is a political office. I would be a very worried person if nobody express dissatisfaction with my work. I would be worried if nobody was hitting me every other day,” Tuju said when asked about his possible removal from the position.

The NDC is also likely to discuss and seal the fate of Deputy President William Ruto as Jubilee deputy leader.

The convention, which will chaired by the president may vote to remove him as deputy party boss.

The DP has led a splinter group in decamping to UDA party after they cited frustrations within the ruling outfit.

Also likely to be canvassed at the meeting is grassroots elections. The party was initially scheduled to conduct the elections last year but it was postponed.

“We really wanted the elections to be held in 2020. We were ready and prepared. Indeed, we were only delayed by the requirements that were made to us by the registrar of the political parties,”

“This being a very litigious country, if we did it without the requirement of the registrar of political parties, then those elections would be declared null and void. After that, we went into Covid-19,” Tuju said.

ODM reaching out to OKA affiliates for coalition talks — Oparanya

Says Orange party is strengthening and solidifying its strongholds to join the coalition as a strong partner.
News
2 months ago