The body of Wanjiru, who at the time was 21, was found in a septic tank.

• Wanjiru was missing for three months after she had spent an evening partying with soldiers.

• The news about her death emerged last week after a UK newspaper reported that the suspected soldier allegedly confessed to the act. 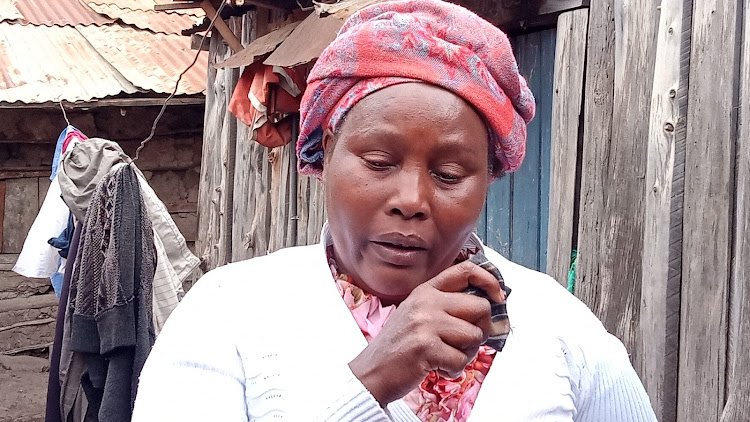 Rose Wanyua Wanjiku, an aunt to Agnes Wanjiru, speaks to the Star at her home in Majengo estate in Nanyuki town on Sunday.
Image: ELIUD WAITHAKA

The UK's Ministry of Defence has said the country is ready to support all requests from Kenya during investigations into the murder of Agnes Wanjiru.

In a tweet on Monday, the ministry said, "The UK stands ready to support all requests as we have done since day one. As with other investigations we always work in partnership with the Kenyan police and subject to international and judicial processes our help will always be forthcoming."

"As with other investigations we always work in partnership with the Kenyan police and subject to international and judicial processes our help will always be forthcoming". (2/2)

Inspector General Hillary Mutyambai had earlier in the day announced the police will reopen investigations.

Wanjiru was murdered in 2012, a crime attributed to a British soldier in Nanyuki.

Mutyambai said he had directed DCI boss George Kinoti to reopen the case and launch investigations in a bid to collate the available evidence to serve justice to Wanjiru’s family.

“I have directed the DCI to reopen the case and compile all the available evidence and witness accounts and ensure that the case is concluded before a court of law,” Mutyambai said.

The body of Wanjiru, who at the time was 21, was found in a septic tank at the Lions Court Hotel in Nanyuki in 2012. Her decomposing body had missing parts and a stabbing injury.

Wanjiru was missing for three months after she had spent an evening partying with soldiers.

The news about her death emerged last week after a UK newspaper reported that the suspected soldier allegedly confessed to the act.

A judicial inquest headed by judge Njeri Thuku concluded in 2019 that the mother of one had been murdered by one or two British soldiers.

She ordered two further criminal inquiries, but the military took no action.

Mutyambai also called on the UK authorities to cooperate with the local cops to unravel the case to help seek justice.

“I’m also urging the UK government to collaborate with us to conclude the case and administer justice,” the IG said.

This came even as it emerged that the Kenyan police were slow-walking while probing the matter due to the fear aggressive investigations would put the ‘strong bilateral relations between the two countries into jeopardy.’

British Defense minister Ben Wallace said over the weekend that the Kenya police only submitted a formal request for DNA samples this week.

The DNA samples are to be extracted from nine soldiers who spent the night at the Nanyuki hotel on March 31, 2012 when the incident happened.

The London paper has also revealed that after killing Wanjiru, who worked at the time as a sex worker, the suspected soldier joked about it on Facebook.

Further, it also turned out that a British MP has launched a crowd-funding initiative to help support the education of Wanjiru's daughter, Stacy.

The daughter is now almost 10 years old and being raised by her aunt in difficult conditions, with little resources and support.

Labour MP from Birmingham, Yardley Jessica Rose Phillips, has started a drive to ".. help Stacy and her family following the horrific death of her mother, allowing them to provide the best environment for her to grow up in and make sure she has the brightest possible future."

The MP called on the British Ministry of Defense to act immediately, especially in light of the revelation that the suspect joked about the murder.

"Joking about sexually exploiting poor women is bad enough, what about how one of them had been killed possibly by one of the group is sickening. The MoD must act immediately and transparently to investigate & stop mitigating and quibbling on responsibility," she said.

Post a comment
WATCH: The latest videos from the Star
by GORDON OSEN News Journalist
News
01 November 2021 - 17:48
Read The E-Paper