• Wathuti told the world leaders that millions of Kenyans are facing climate-related starvation due to the inaction by governments across the world.

• Uhuru was expected to set out the ambitious actions Kenya is taking to tackle climate change and showcase Kenya as a leader in climate action in the region. 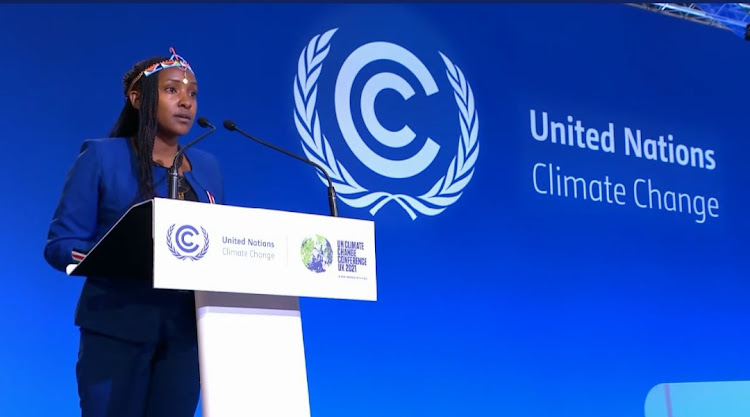 Speaking at the ongoing UN Climate Change Conference on Monday, Wathuti, 26, told world leaders that children and young people are waiting for them to act.

"Every day we learn that if we take care of the trees, they take care of us. The children cannot live on words and empty promises. They are waiting for you to act. Please open your hearts," the activist said.

In an emotional speech at the close of the opening ceremony, Wathuti asked world leaders to take a minute of "compassionate silence" for those who have lost their lives due to the climate crisis.

She told the world leaders that millions of Kenyans are facing climate-related starvation due to the inaction by governments across the world.

"In this past year, both of our rainy seasons have failed. Scientists say it may be 12 months until the rains return. Meanwhile, our rivers run dry, our harvests failing; our animals and people dying," Wathuti said.

Wathuti told COP26 that inaction on the climate crisis was leading to undue suffering for millions of children in Africa.

"I have seen with my own eyes three young children crying at the side of a dried-up river after walking 12 miles with their mother to find water," she said.

Her speech came before President Uhuru Kenyatta who is leading Africa in seeking greater commitment from the rest of the world at the Climate Change Conference.

Uhuru was expected to set out the ambitious actions Kenya is taking to tackle climate change and showcase the country as a leader in climate action in the region.

Despite bearing almost none of the historic responsibility, Kenya is leading the way in tackling climate change in the region.

Kenya was the first African country to pass a Climate Change Act in 2016 and runs on 90 per cent renewable power, with a target of hitting 100 per cent by 2030.

On Tuesday, Uhuru will be joining other discussions including a high-level event on innovation hosted by UK Prime Minister Boris Johnson.

Marathon champion Eliud Kipchoge will join the President in pressing for action to halt and reverse forest loss.

The President is also expected to speak at a high-level panel for a Sustainable Ocean Economy to be hosted by the Prime Minister of Norway and the President of Palau.

On Wednesday, in an event to be hosted by Diageo, Uhuru and Kenya Breweries Limited MD John Musunga are expected to meet the Scottish Africa Business Association for discussions on water and sustainability in an African context.

Diageo has been a business champion of Sustainable Development Goal 6: “Ensure availability and sustainable management of water and sanitation for all”.

Diageo will be joining a group of the world’s biggest companies and brands to launch a major awareness campaign, “The World’s To-Do List” during COP26.

On Wednesday, National Treasury CS Ukur Yatani will be speaking at Finance Day, where climate finance best practices will be highlighted.

We can't treat nature like a toilet - Guterres tells COP26

UN Boss: Our planet is talking to us and telling us something.
News
2 months ago
Mzee who grew up before climate change crisis fears for posterity
by OLIVER MATHENGE Digital Editor
News
02 November 2021 - 06:45