Ruto to Kenyans: Elect your choice, don't bow to pressure

He said Kenya will be a more transformed country if its politics is anchored on issues.

• The DP asked the country not to bow down to any form of pressure from those in power to erode their political choices.

• He said Kenya will be a more transformed country if its politics is anchored on issues. 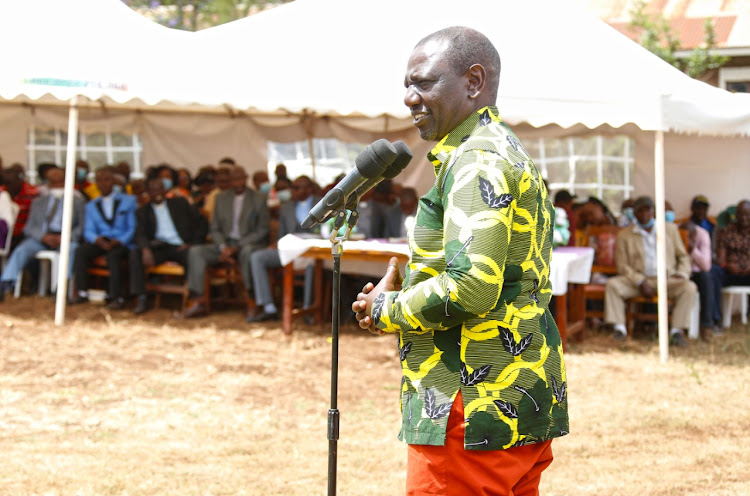 Deputy President William Ruto has said it is possible to make the 2022 polls peaceful and smooth.

However, he said this will be achieved if Kenyans are given a fair chance to elect leaders of their choice.

“The contest must be free of blackmail, threats and intimidation,” he said.

Ruto noted that the current employment of fear and coercion to shape next year’s political choices was primitive and out of date.

“Fear is a sin. We cannot buy it. We will not buy it. Kenyans will only buy issues,” he added.

Deputy President William Ruto on Sunday said the 2022 election contest should be free of blackmail, threats and intimidation while at Kimana Christ the King Catholic Church and A.I.C. Church Loitoktok in Kajiado County.

He spoke on Sunday at Kimana Christ the King Catholic Church and A.I.C. Church Loitoktok in Kajiado County where he attended prayer services.

He also addressed wananchi at Illasit, Loitoktok and Kimana Towns.

The DP asked the country not to bow down to any form of pressure from those in power to erode their political choices.

“It is your vote that will determine if you will have food on the table tomorrow. Support a candidate and a party that will address your challenges,” he said.

He said Kenya will be a more transformed country if its politics is anchored on issues.

Ruto challenged his competition to share with Kenyans their development agenda.

“Let them also make public how they plan to unite the country under their fragmented political parties,” the DP said.

“We should not accept that. Elections will be decided by the people, not an individual,” Gachagua said.

Even with the threats, Garissa MP Aden Duale asked Kenyans to back Ruto and the Bottom-Up Economic Model that seeks to empower ordinary people.

“We cannot go back to the politics of tribe and division. The race is decided; it is between the people’s candidate versus President Kenyatta’s Project,” he claimed.

He said it is now up-to Kenyans to decide if they should rally behind a system’s project or a candidate with an agenda to better lives of the people.

“That project (candidate) will have no business in fighting poverty in our country,” Kajiado South MP Katoo Ole Metito added.

Kajiado East MP Peris Tobiko urged Kenyans to support the United Democratic Alliance whose plan is on the uplifting of the underprivileged.

She promised to engage in a peaceful contest with Ole Metito for the Kajiado Gubernatorial seat.

“If he defeats me, I will campaign for him,” Tobiko observed.

The MPs said Uhuru had power to deal with those involved in the vice.
News
2 months ago

How DP Ruto has changed tack in hunt for votes