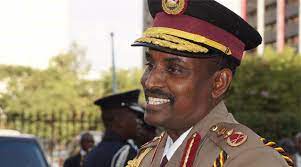 At least six others were injured in the Wednesday evening incident within the restive Laikipia Nature Conservancy, Laikipia County.

Gabow met with the teams on the ground on Thursday and Friday and encouraged them to continue with the operation in the area terming the ambush a hazard.

More personnel and equipment were sent to the area Friday to reinforce the operation.

He told the Star they are in control of the situation and there was no cause for panicking.

It emerged the gunmen who attacked a Mine-Resistant Ambush Protected (MRAP) vehicle the offices were traveling in wanted to kill all those on board.

There were 15 officers in the vehicle at the time of the attack. Authorities said the driver of the vehicle panicked and lost its control forcing it to overturn.

And as the occupants stepped out of the vehicle thinking it was safe, they were shot at by a gunman who escaped from the vicinity. A senior police officer said the victims died on the spot.

The other officers were saved by a reinforcement that arrived there minutes later and engaged the gunmen who were hiding in the gorges in the area, a survivor said.

“They were hiding in the gorges and shot at close range forcing the driver to panic and the vehicle overturned as it reversed,” said the witness.

He said the multi agency operations in the area will continue and told the illegal herders still therein to leave.

An operation was mounted in the area following repeated attacks on locals and security agencies by gunmen believed to be herders.

More than 10 security personnel have been killed in the more than five months standoff.

As part of efforts to restore order, Matiang’i announced the creation of a police division at Ol Moran with enough officers to patrol.

Ol-Moran was gazetted as the headquarter for Kirima sub-county. He said two additional police stations will be established in the flash point zones.

Additional National Police Reservists will be recruited and deployed in disturbed areas, he said.

Further, a training base for elite police units will be established in the area to enhance police presence and serve as a buffer zone between Laikipia residents and invaders from neighboring counties.

The CS said there will be deployment of surveyors to Laikipia to expedite titling process and review/recommend action on lapsed leases or those about to lapse.

The attackers had been torching houses and other amenities including schools.