Has hired top consultants to help set up a 24-hour call centre in a secret and secure location. 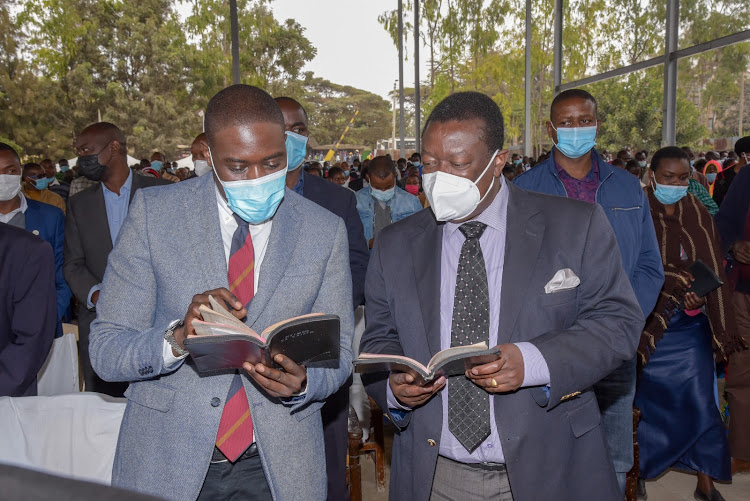 In yet another sign of his determination to energise his bid, the former vice president has also hired top consultants to help set up a 24-hour call centre in a secret and secure location.

The call centre will eventually be used to conduct a parallel tallying of votes.

According to a plan seen by the Star, Mudavadi intends to deploy up to 50,000 poll agents across the country who will be stationed in every polling station.

The Star has further learnt that Mudavadi is under intense pressure from some Central Kenya leaders and businesspeople who believe he's the best alternative to ODM leader Raila Odinga.

"Those who are writing off Mudavadi will be shocked because he has both financial and political support he needs to roll out his well-oiled presidential campaign," a Masalia confidant said.

Sakaja, according to the plan, will set up all the campaign structures and recruit the relevant staff in the next few weeks.

Already well-known businesspeople have been financing some of the activities and have promised to ramp up their support.

Within his One Kenya Alliance, Mudavadi is determined to be the joint presidential candidate.

Oka principals plan to launch their presidential bids within the next month but will finally back one candidate in January.

The revelations emerged at a time the principals are embarking on a rigorous meet-the-people campaign to popularise the outfit across the country after a lull.

Oka will hold a series of rallies with the first inroads being in Western Kenya and Central this weekend.

The Western Kenya tour comes barely a week after DP Ruto and Raila pitched tent in the region.

Last week, the Star exclusively reported about the intense pressure Oka principals were facing from top state operatives to shelve their ambitions, including campaigns, and join Raila in his countrywide rallies.

The operatives had threatened to cut off their financial support to Oka if they did not join Raila. The pressure led to the prolonged lull in activities of the alliance.

However, it emerged that some of the principals are reluctant to join Raila, with Musalia insisting on charting his own path.

Raila also reportedly developed cold feet to join Oka whose principals had demanded that he does so on their terms.

Yesterday, Makueni MP Dan Maanzo hinted at a new alliance, saying that Raila and Oka bosses have no option but to unite to face the DP.

"They should urgently engage as equals. If they don’t want to engage then they are giving the presidency to Ruto.  They should come up with a mega alliance but of equals," he said.

However, the biggest headache is whether the Oka bosses will drop their presidential bids in favour of Raila who they fell out with in the Nasa coalition.

The ODM boss is said to be keen to have Kalonzo, if not all the Oka bosses, attend the meeting that will be held in his backyard.

Kalonzo, who was out in Europe for several days, has returned ahead of a rigorous meet-the-people campaign to popularise the outfit across the country.

Mudavadi, Kalonzo, Wetang’ula and Gideon are on Friday expected to address rallies in several towns in Western before holding the main event in Kakamega town.

Kakamega Senator Cleophas Malala said Friday will mark the beginning of a series of rallies amidst ongoing talks within OKA to make the outfit a formidable force ahead of the 2022 elections.

“The people of Western should be ready to welcome our party leader Musalia Mudavadi who will be leading the Oka team together with senators Moses Wetang'ula and Gideon Moi, Wiper leader Kalonzo Musyoka and our brother Cyrus Jirongo,” Malala added.

The Oka team will be in Kiambu county on Saturday where they will tour Thika town and Githurai areas and then move to Kajiado county the following weekend.

Ford Kenya national organising secretary Chris Mandu Mandu said Friday will mark the beginning of rigorous campaigns that will see them visit every region of the country.

“We will hit the road on Friday. After Kakamega, it will be campaigns every now and then until we go to the polls,” he stated.

“We have finished the planning stage and we are now in execution. People will see fire. All principals, including Kalonzo who has been away, will be there. Musalia and Wetang’ula will be the first to host,” he stated.

Savula downplayed the influence of the Ruto and Raila in Western Kenya.

He maintained that Mudavadi still commands a huge constituency in Western and his unity with the Ford Kenya party leader cements their support in the region.

“We have told ODM many times to reflect and rethink. Since they betrayed us in Nasa our people don’t want to listen to the orange narratives anymore. Let them put their eye on what is going to happen on Friday. They will then understand what we are saying that Western Kenya is fully behind Musalia Mudavadi,” Savula said.

“For UDA let them try their luck. We told them not to try their games in Matungu; they gave it a deaf ear. We are monitoring their moves. Soon they will realise that they were wasting their time and energy.”

The Oka Western Kenya tour will also double up as a campaign to rally Kenyans to come out and register as voters as the mass registration exercise enters its fourth and final week.

The number in Western Kenya as compared to other regions is below target and Oka leaders will be urging residents to turn up and be registered.

Mudavadi will be banking on the Western Kenya numbers to negotiate for the Oka flagbearer ticket.

“Oka is holding on very well. So far, I cannot say I have seen anything unusual. We are having regular consultations and everything is playing out as planned for Oka. We still have several months ahead of us. Within those months a lot of things will have happened,” Mudavadi said.

Mudavadi: Why I will not shelve 2022 presidential bid

OKA principals fear that they maybe rendered irrelevant if they do not act quickly.
News
1 month ago

The News Brief: Mudavadi: I'm not backing down on presidential bid

The News Brief: Mudavadi: I'm not backing down on presidential bid
News
1 month ago

Oka faces doom as pressure mounts to back Raila