Ruto will be the 5th President, says Governor Waiguru

She says only the DP has what it takes to move the country to the next level. 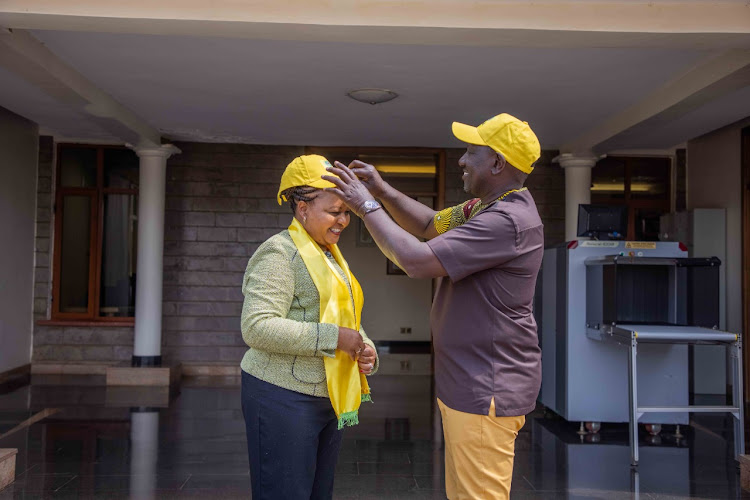 In an interview with the Star, she said “all signs were now only clear that the DP will be the next President but he also has what it takes to lead the country to new economic recovery.”

The former Devolution Cabinet secretary said of all the presidential candidates who have announced their State House bid, it is only Ruto who can build on what the Jubilee administration and counties have achieved.

“For now, what the country needs is someone who has energy, drive and an articulate mind to come up with a plan and a team to work on how the country will recover from economic downturn brought about by the Covid-19 pandemic,” she told the Star.

A former fierce critic of the DP and a defender of the handshake between President Uhuru Kenyatta and ODM leader Raila Odinga, Waiguru said there are no regrets, noting that in the mix of BBI politics , there was no bad blood between her and Ruto.

She pointed out that her political journey with the DP started in the run-up to the 2013 general elections and “therefore difference in opinion does not amount to personal grudges.”

“The Deputy President and I have never been at loggerheads, we have always maintained a cordial relationship and open channels of communication despite sometimes differing views in political matters or strategies.”

After months of giving mixed signals on her next political move, Waiguru on Tuesday took a bold step and ditched Uhuru camp for Ruto’s “hustler nation”.

The governor, who was received formally by the Ruto at his Karen residence, said she joined the United Democratic Movement after carrying out extensive consultations among her supporters.

"I have asked if it is betrayal if I moved but the message that I was given by everybody is that in politics you must be very careful to stay relevant and listen to the people,” Waiguru said.

On Wednesday,  Waiguru said contrary to perceptions being created that Ruto’s popularity in Mt Kenya was starting to fall, she pointed out that the Ruto and the UDA party were even gaining traction in the region.

She said as of now, she is not interested in being Ruto’s running mate as widely speculated, saying she will defend her seat on a UDA ticket.

“Form ni hustler, chama ni UDA and mpango ni bottom up. This what Kirinyaga people have told me and I believe in them because they are the voters,” she said.

Observers have said the re-union of Waiguru and Ruto could complicate the governor race in the county where top contenders are all pledging allegiance to Ruto.

County Woman Representative Wangui Ngirici, a confidant of the DP, has stood with Ruto since the Jubilee administration launched an onslaught against Tangatanga camp.

Waiguru’s deputy Peter Ndambiri has also announced that he will be seeking to dethrone his boss, also on the UDA ticket.

With Narc-Kenya party leader Martha Karua also in the gubernatorial race, a battle of titans is inevitable in the region.