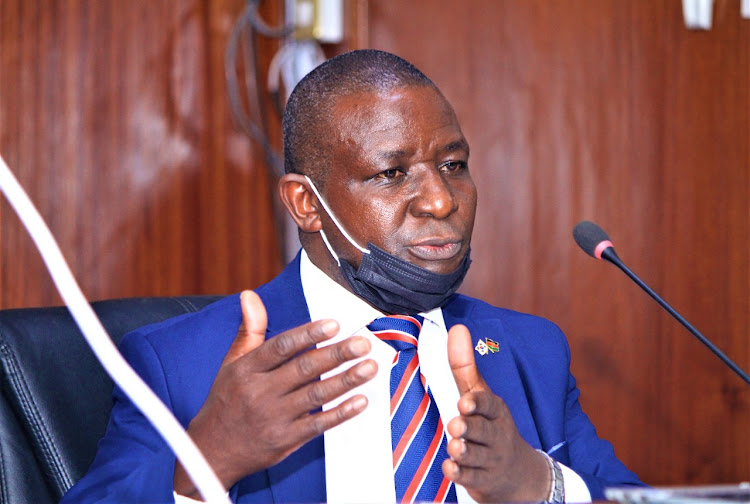 It has emerged that the company behind Gatundu South MP Moses Kuria’s electric mat was banned in Texas over cancer cure claims.

The company-Ceragem Limited is also operating in the country as a healthcare provider without Pharmacy and Poisons Board approval as required by the law.

On Tuesday, MPs also heard that Ceragem staff have no medical background despite posing as alternative medicine suppliers.

It has emerged that the company behind Gatundu South MP Moses Kuria’s electric mat, Ceragem Limited, is operating in the country as a healthcare provider without Pharmacy and Poisons Board approval as required by the law.

The revelations emerged even as Kuria revealed he had written to the Directorate of Criminal Investigations to probe the criminal elements in the company dealings.

Kuria also demanded to know why the company which was banned in Texas for making claims that it can cure cancer is being allowed to operate freely in the country.

“Their products were banned in Texas for fraudulently making claims of curing cancer,” the Gatundu South MP said from his hospital bed.

“The company must take responsibility, I have contacted DCI and the criminal process is taking place.”

Tongaren MP Eseli Simuyu asked the CEO about the Texas ban and he admitted but explained they have now resumed operations.

Appearing before the National Assembly’s Health Committee, the company CEO Vincent Omallah was at pains to explain how they diagnose their clients and prescribe the products without trained personnel.

Omallah was appearing over a statement requested by the Gatundu South MP regarding medical products and devices being promoted and sold in the country by Ceragem Ltd.

He admitted that their company ran into problems with Texas authorities but explained all issues were ironed out and they are now back to business.

“Texas had some issues with Ceragem, we are aware of some of our members saying they can help cancer patients but now we have several shops operating in Texas and most Western countries,” Omallah said.

He further said most of their products come with instructions manuals for clients downplaying the need for trained health personnel.

The CEO was also pressed to explain how they are operating in the country without a license and no constitutional body to regulate their operations.

“Who has authorized you to medically talk about cancer without medical personnel?” posed committee chairperson Sabina Chege.

“Who has licensed you to practice in Kenya and who regulates you?”

The Muranga Woman Representative accused the company of taking advantage of desperate Kenyans to make cash.

She asked whether the company was licensed as required but the CEO said they only have products certified by Kebs at the point of entry into the country.

“Our worry is not Moses Kuria but we are more concerned about you taking advantage of desperate Kenyans. We want to appeal to Kenyans who have used these products to talk to us.”

The company which has been in operations for 14 years in the country has shops in Nairobi, Thika, Mombasa, Eldoret, Murang’a, Eastleigh and Garissa.

Tongaren MP Eseli Simiyu observed that the lack of framework for alternative medicine in the country is to blame for the mess in the sector.

He said unlike other countries like China, Kenya has not developed checks and balances for alternative medicine; a situation he noted puts the lives of Kenyans at risk.

Kuria had acquired the electric mat and blanket through an MCA friend from Murang’a, as a solution to what he said was numbness in his feet.

After standing on the mat for four hours as was directed, his feet exploded and had to be rushed to hospital with third-degree burns.