Ruto to rivals: Stop wasting Uhuru's time, I'm your competitor not him

DP says Uhuru was elected to serve Kenyans, not to unite six men against him.

• He said Uhuru was elected to serve millions of Kenyans and not to unite six men against him ahead of 2022.

• Ruto said it's not the responsibility of the President to unite individuals who have no agenda for the country.

Deputy President William Ruto has asked his competitors to stop disturbing President Uhuru Kenyatta and allow him to serve Kenyans.

He said Uhuru was elected to serve millions of Kenyans and not to unite six men against him ahead of 2022.

"Hanging around President Kenyatta for direction and support, was a clear indication that my competitors have no plans and agenda for the country," Ruto said.

He was speaking at various stopovers during his empowerment tour of Kakamega County on Friday.

Ruto said it's not the responsibility of the President to unite individuals who have no agenda for the country.

"I want to give free advice to my competitors to stop disturbing our President. They should leave Uhuru alone to implement his agenda for the country," he said.

Ruto said Opposition leaders will compete against him not the President come 2022.

"My competitors should wake up to the reality that I am the one competing with them in 2022," he said.

“They should stop wasting the President's time and get in touch with the people at the grassroots because they are the ones with the final say on leadership."

Duale said it was now clear that the 2022 competition has been clearly defined. 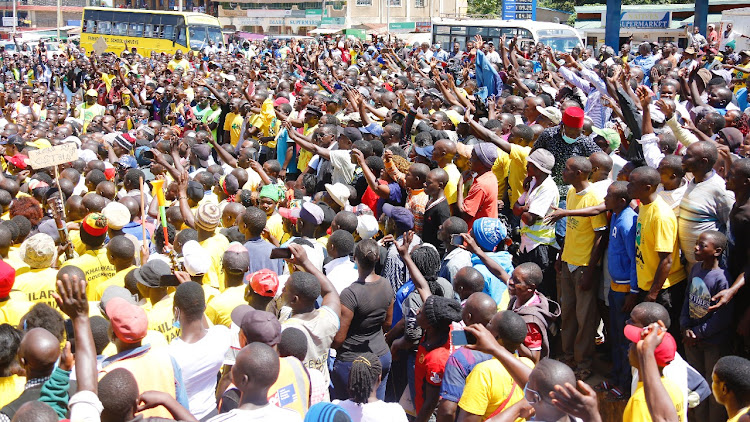 Barasa urged residents of Western Kenya to support Ruto for presidency next year, saying his agenda and development track record was clear.

"Some few individuals want to dictate the leadership of the country. This is why hustlers through the bottom up economic model are ready to face them," he said.

On Thursday, Ruto said the 2022 election contest has been framed.

He said the race will be between the Hustler Nation and the 'project of the System'.

Ruto was referring to ODM party leader Raila Odinga, whom he has referred to as a government project.

Ruto  had expressed displeasure at President Uhuru Kenyatta’s decision to back Raila for the presidency instead of him.

He said he would defeat Raila just like he was defeated by Jubilee in the last two general elections.