Chakwera was accorded guard of honour, mounted by 21-gun salute.

• The signed instruments of cooperation are on Health, Tourism, Diplomatic Training, Political and Diplomatic Consultations, Defence, Cooperatives, Trade, and Fisheries.

• Chakwera arrived in the country on Tuesday afternoon and was the Chief guest during the Mashujaa Day celebrations that were held in Kirinyaga County on Wednesday.

Kenya and Malawi have signed eight treaties that are expected to boost bilateral ties between the two nations.

Presidents Uhuru Kenyatta and Lazarus Chakwera announced the move on Thursday in a joint press address from State House, Nairobi.

The signed instruments of cooperation are on Health, Tourism, Diplomatic Training, Political and Diplomatic Consultations, Defence, Cooperatives, Trade, and Fisheries.

Uhuru said that Kenya and Malawi share a rich history of friendship and cooperation handed over by the Founding Fathers.

“Through the years, Kenya and Malawi have maintained a strong bond of friendship that has

seen the two Countries collaborate in initiatives aimed at securing the prosperity of our peoples,” Uhuru said

Chakwera and First Lady Monica Chakwera were received at State House by Uhuru earlier during the day.

The elaborate military reception ceremony for the Malawi Head of State, who is in the country on a three-day state visit, included a guard of honour mounted by a detachment of the Kenya Army and a 21-gun salute. 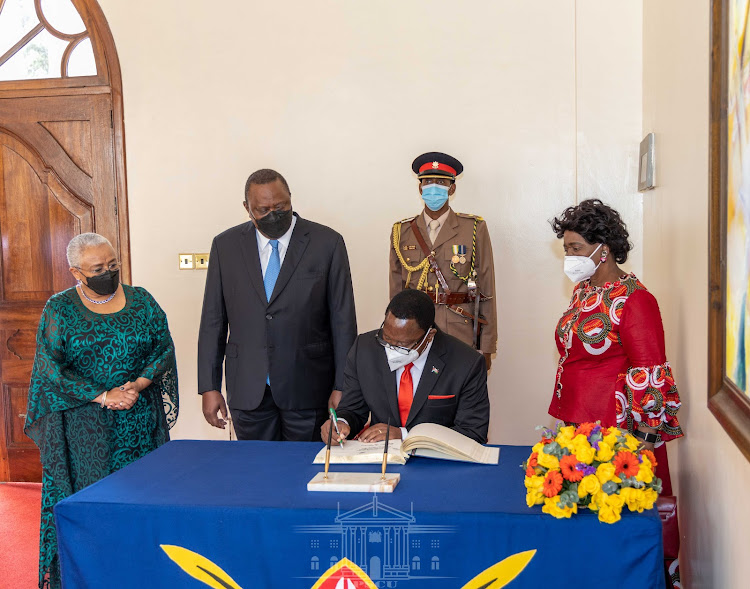 The two Heads of State then proceeded for the 3rd Kenya-Malawi Joint Permanent Commission for Cooperation (JPCC-3).

Uhuru said that JPCC is an important mechanism for strengthening relations and unlocking the unlimited political, social, economic, and diplomatic potential of the two countries.

"I would like to task respective government officials to expedite the conclusion of negotiations for the remaining MoUs and agreements in the areas of ForestryManagement; Information CommunicationTechnology; Police Service; Investment Protection and Promotion Agreement (IPPA); Lands, PhysicalPlanning and Urban Development; Customs; Gender Equality and Women Empowerment; and Youth Development, so as to fully unlock the potential of our bilateral ties for the benefit of the citizens of our two Republics."

Uhuru added that Kenya being the UNSC President for the month of October will endeavour to remain a strong voice for Africa as well as the Caribbean and the Pacific in addressing the stubborn challenges that face our world.

Further, Uhuru said that Kenya is concerned with the current situation in Mozambique.

"In this regard, Kenya commends and supports the steps taken by the Southern African Development Community (SADC), under your able chairmanship, of working with Mozambique in neutralizing the terrorist threats in that country. As friends of Mozambique, we stand ready to support your efforts."

Chakwera arrived in the country on Tuesday afternoon and was the Chief guest during the Mashujaa Day celebrations that were held in Kirinyaga County on Wednesday.

Chakwera to jet in on Tuesday.
News
1 month ago