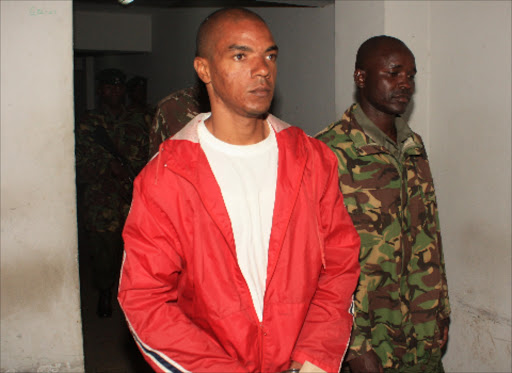 Briton Germain Grant is led to the cells after his defence hearing for robbery with violence at Milimani court on July 30, 2013.Photo/File

The High Court in Mombasa has declined to overturn a four-year sentence of Briton Jermaine Grant who was found guilty of being in possession of explosives-making materials.

Grant had appealed his sentence after he was convicted in 2019 by senior principal magistrate Joyce Gandani.

He wanted the High Court to overturn the sentence, terming it unfair.

He also cited errors by the trial magistrate saying the magistrate did not consider his defence while making the judgment.

However judge Anne Onginjo said the sentence was fairly lenient and therefore the court could not interfere with the lower court’s decision.

Onginjo said the appeal lacked merit and therefore could not be allowed.

She said the prosecution had proven its case beyond reasonable doubt during the trial which resulted to Grant’s conviction.

In his appeal, Grant said there was contradiction between the information on the charge sheet and the evidence adduced during the trial.

He said the charge sheet said he was arrested while in possession of explosives yet exhibits produced before court were materials meant for making explosives.

He said the materials were not considered as explosives in the law.

Grant further said the trial magistrate erred by failing to consider his defence that a police officer planted a flash disk in his pocket during his arrest in Kisauni area.

The Briton further claimed the ownership of the house where the explosives were found was contentious.

He maintained that the three bedroomed house belonged to  one Hassan who had given him one room to stay in.

However, the judge threw out all the appeal grounds claiming they lacked basis of truthiness.

She said the law does not categorise the materials as explosives but expert’s testimony proved that the materials were catastrophic if they were mixed.

She said the police did a commendable job in arresting the accused before he materialised his plan of assembling the explosives.

The court also found the Briton to be up to no good after he failed to give his true identity.

“He introduced himself as Ali and later as Joseph, a Canadian businessman and later discovered to be Grant. Only a person with no good intention can falsify his identity," she said.

Onginjo further said Grant failed to identity the police officer who allegedly planted the flash disk which contained videos of how to make explosives.

On the ownership of the house where the materials were found and where Grant was arrested, the judge said his claims were not convincing.

She further said his wife had told the police that her husband lived in the house alongside a friend.