Through their lawyer and uncle Philip Murgor, they have demanded action for the incident.

• Sisters Stephanie and Cheryl Murgor spoke out in the company of their lawyer who is also their uncle Philip Murgor and demanded action on the two brothers for the incident.

• Stephanie said she was choked by one of the brothers that she can’t now swallow food well while her sister said she had bruises on her hand out of the beating.

Sisters Stephanie and Cheryl Murgor spoke out in the company of their lawyer who is also their uncle Philip Murgor and demanded action on the two brothers for the incident. https://bit.ly/3vvYuKl 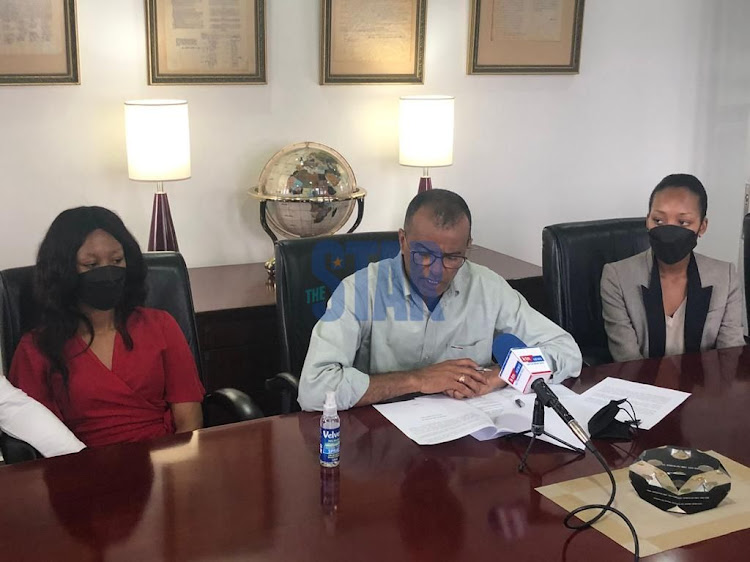 Sisters Stephanie and Cheryl Murgor in the company of their lawyer who is also their uncle Philip Murgor have demanded action on the twin Ndichu brothers for the incident.
Image: CYRUS OMBATI

The two sisters who claim they were assaulted by twin brothers Edward Ndichu and Paul Ndichu have come out to narrate the drama that led to their attack.

Sisters Stephanie and Cheryl Murgor spoke out in the company of their lawyer who is also their uncle Philip Murgor and demanded action on the two brothers for the incident.

Stephanie said she was choked by one of the brothers that she can’t now swallow food well while her sister said she had bruises on her hand out of the beating.

“We expect nothing but justice. While the Police IG has given assurance that the incident will be fully investigated, on our part, due to the alleged influence and power the perpetrators are supposed to wield, we demand that the IG assign the investigation to a species team at police headquarters who should ensure that the investigations are completed as soon as possible and forwarded to the ODPP for the prosecution of the Ndichu twins,” they said.

They added they had filed and returned their P3 forms out of the assault which was captured on camera and they expect swift action from police.

The two girls run a designer clothesline in the city.

They said they were attending a wedding after-party at the hotel on the 10 floor and were accompanied by two friends Samuel Ramdas and Patrick Koech.

At about 2.30 am, one of the twin brothers allegedly made an improper pass at Stephanie to which she told him she knows him as a husband to Janet Mbugua.

The lady who was with the brothers shouted ex-husband.

When Stephanie left for the exit one of the brothers verbally assaulted her.

“Suddenly, the brother in dark clothes jumped onto Stephanie and started choking her by grabbing her by the throat. When her boyfriend Samuel attempted to rescue her he was also grabbed by the throat. After a few seconds he let go of the two extremely shaken couple but went on to threaten them by stating he had marked their faces,” Murgor said.

The two sisters walked to the lift area where more confrontation broke out as they tried to get to their car.

“Suddenly the twin brothers with their lady friend appeared on the ground floor and proceeded to attack Cheryl and Patrick after which both brothers proceeded to the front entrance where Stephanie and Samuel were waiting,” Murgor said.

"At the entrance, one of the brothers violently broke the right-hand door side mirror while the other one broke the left-hand side one before they again went to attack Cheryl."

“During the incident, the brothers threatened to shoot them,” Murgor said.

The hotel security and police intervened to save the victims from serious injury if not death, added Murgor.

The Ndichu brothers then pleaded to pay for the damage of the car mirrors and a dent at Sh110,000.

“One of the brothers proceeded to pay via M-Pesa after which they both went back to the hotel. However, immediately thereafter, the transaction was reversed. At no point did the young ladies accept any compensation for the assault or injury to themselves,” Murgor said.

They made a report at Akila police station and were issued with P3 forms for injuries including a bite injury on Cheryl and tenderness on the neck of Stephanie.

However, in a strange twist, the woman who was with the Ndichu twins later issued a statement terming they claims by the Murgors were lies.

Ms Munira Hassan claimed she was assaulted by the Murgor sisters and produced a medical report that shows she had bruises.

She added the twin brothers were trying to help out of the beating from one of the Murigor sisters and her boyfriend.

“As a result, my hair was painfully plucked from my scalp… I was unconscious for a few seconds and left with bruises on my body and a bloody scar on my forehead as per the attached medical report,” she said.

She urged the Murgor sisters to wait for the police probe outcomes in the drama.

“The twins ran back in to help me and get this crazy lady off me because she wouldn’t let my hair go,” she said.