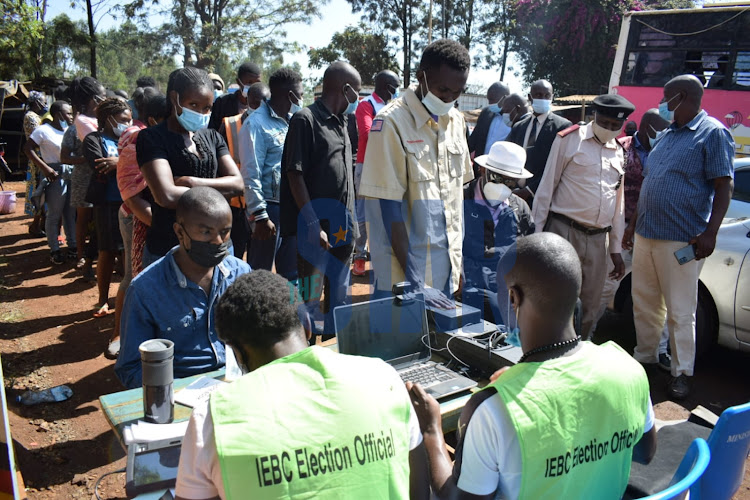 APATHY: Voters turn out to register and verify their status at Kitisuru chief's camp in Kangemi, Nairobi, on October 4.
Image: CHARLENE MALWA

The latest figures released by the IEBC show the 10 Mt Kenya counties have posted low registration numbers as the exercise entered week three.

On average, the counties are at 10 per cent of their targets, with some lagging as low as seven per cent compared to other counties that have hit as high as 30 per cent.

The low turnout is a shocker to the region that has considered the cradle of the tyranny of numbers. The region has been known for posting high turnout in both voter registration as well as voting.

With the exit of President Kenyatta in 2022, the region lacks a political kingpin — an assertive and outstanding presidential candidate.

This could explain the apparent lack of motivation among the residents to register as voters. It also triggers concerns that apathy may also manifest itself on voting day.

Political analyst Kariuki Ngunjiri said the fact that the mountain may not field a top contender for the presidency in 2022 could be a reason people are not enthusiastic about registering.

He added that the culture of people rushing to register on the very last day of the exercise could be another reason.

“I believe the numbers will increase significantly when the exercise is coming to an end,” he stated.

Ngunjiri said disappointment in the Jubilee administration could have led to low voter registration.

“People have no morale. They have been disappointed by a government that had promised too much,” he explained.

Kieni MP Kanini Kega also blamed the poor turnout on the culture of rushing to register at the eleventh hour. “In the next two weeks, we are going to go to the constituencies to mobilise people to register as voters,” he said.

He added that people are also not eager to enlist because they are awaiting directions from their leaders on the political path they should follow.

“Once we give them the direction of the presidency, they will register as voters,” he added.

Mt Kenya has become a battleground with Deputy President William Ruto and ODM boss Raila Odinga scrambling for a piece of the vote bloc.

The ODM boss, seen as the president’s apparent preferred successor, has escalated his political activities, securing crucial endorsements from business tycoons, politicians and youths from the region.

According to the figures released by the Independent Electoral and Boundaries Commission on Monday, Nakuru and Meru have posted the highest percentage among the 10 counties at 13 per cent each.

In absolute numbers, Nakuru county has registered 19,694 people by the end of the second week against a total target of 309,384.

Tharaka Nithi hit 12 per cent of its second-week target to stand at 4,211. Some 34,693 eligible voters were targeted by the end of the second week.

Kiambu and Nyandarua are at nine per cent each, Kirinyaga at 11 per cent, Murang'a at eight per cent while Nyeri is trailing at seven per cent.

Kiambu, the county with the largest number of registered voters after Nairobi, listed only 15,044 people against a target of 176,684 by the end the second week.

In total, the IEBC aims to register at least 353,367 people from the county which is President Kenyatta's home area.

Neighbouring Murang’a county only registered 7,985 people in week two against a target of 95,773. IEBC seeks to net about 191,545 voters from the region by the end of the exercise early next month.

The figures show region considered the Deputy President William Ruto's political strongholds have continued to post impressive percentages with only two weeks left to the end of the exercise.

Kericho, Bomet, Trans Nzoia, Nandi, Uasin Gishu, Baringo and Elgeyo Marakwet have hit an average of more than 20 per cent

Baringo, considered a battleground between the DP and Kanu chairman Gideon Moi, has seen 9,797 people turn out to be registered compared to a target of 38,073 by the week's end.

Vote-rich Narok and Kajiado counties, areas considered swing areas, are at 26 and 15 per cent, respectively.