Penalties include a two-year jail term, Sh500,000 or both

• “We have written to IEBC chairman Wafula Chebukati that each aspirant must commit to protect the environment and avoid littering,” Mamo said.

• He said the authority has legal instruments to enforce the regulations. 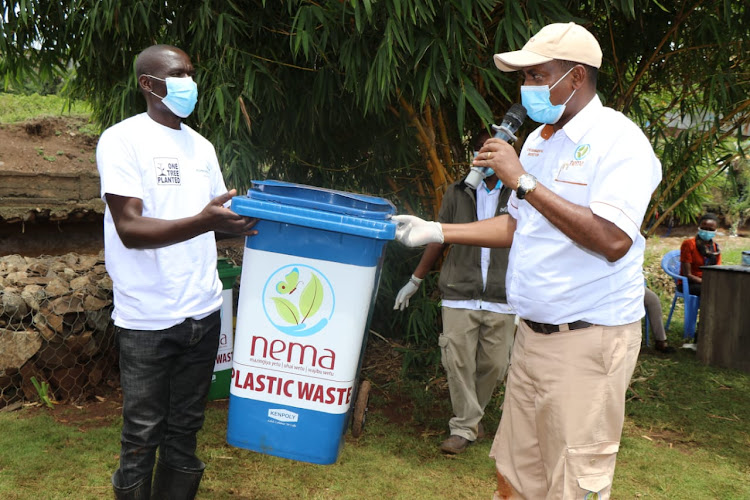 The National Environment Management Authority has tightened the noose for politicians who will pollute the environment with election posters.

Nema director general Mamo Mamo on Tuesday revealed that all aspirants will have to write to the Independent Electoral and Boundaries Commission committing not to pollute the environment.

“We have written to IEBC chairman Wafula Chebukati that each aspirant must commit to protect the environment and avoid littering,” Mamo said.

He said the electioneering period is often accompanied by littering of campaign posters.

Mamo made the remarks when he presided over a tree-planting drive at Ololua forest in an event that was organised by Tetra Pak, a food processing and packaging solutions company.

He said the authority has legal instruments to enforce the regulations.

The Environmental Management and Co-ordination Act does not explicitly detail the fines for those polluting the environment using posters.

The person shall, on conviction be liable to imprisonment for a term not exceeding two years, or to a fine of not more than five hundred thousand shillings, or both.

The act says any person who contravenes any environmental standard prescribed; uses the environment or natural resources in a wasteful and destructive manner contrary to measures prescribed commits an offence.

The act says those found guilty of polluting the environment with hazardous waste will pay a minimum of Sh1 million in fines or serve jail terms of not less than two years, or both.

The law also allows for the forfeiture of vehicles and equipment used in these illegal activities.

Mamo said even though Kenya has the greenest Constitution of 2010, Kenyans most of the time have poor attitudes towards the environment.

“We must take responsibility for the waste we generate,” he said.

Mamo said the constitution bestows responsibility for everyone to take care of the environment.

He said the government was working towards inculcating values to the young generation through the greening of schools for them to jealously guard the environment.

Mamo said Kenya is also moving from a linear model of waste management to a circular model where waste is seen as a resource.

Through the model, waste will be segregated at the source.

He said despite the fact that the authority developed the national guidelines on how to manage waste arising from Covid-19 and shared with all the counties; many were still dumping such waste dangerously.

The DG said the yellow coded bins that had been provided by the authority were meant for Covid-19 waste.

Some of the Covid-19 waste were however getting mixed with other forms of waste.

Mamo warned that such behaviour can easily fuel the spread of diseases.