• The leaders resolved they would stick with Raila to the end. 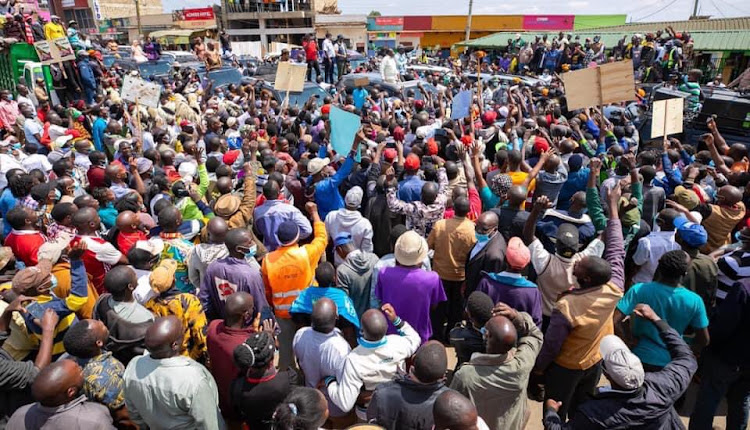 The leaders resolved they would stick with Raila to the end, adding that he has experience and is committed to solving issues affecting Kenyans.

They cited Raila’s commitment to devolution, unity among leaders and his plan to identify markets for miraa and other agricultural produce.

They asked him to deal with problems of lack of markets, inadequate infrastructure, insecurity, drought and boundary disputes.

The region's leaders said they want to “support a candidate who is keen on a united and prosperous Kenya”.

“We have resolved to support Raila as the next president. His working relationship with President Kenyatta has brought stability in the country,” Mwiria said.

“We also support his agenda of shared prosperity and inclusivity. We believe this is possible because Raila is a man who delivers what he promises.”

Delegates at the meeting at Chuka University put their case on a number of issues they want the former Prime Minister to deal with.

He was urged to consider Agriculture CS Peter Munya as his running mate for the face-off with Deputy President William Ruto.

Raila, who also sought to broker a truce between the CS and Kiraitu, was asked to consider appointing the outgoing Embu governor should he form the next government.

The politics of Mt Kenya East versus Mt Kenya West divide also reared its head in the meeting. Leaders from the East said they no longer want to be carried on West’s shoulders.

Kiraitu said they “want to be respected as they have respected others” and that they wouldn’t look down on anybody.

"We want to tell our brothers from the other side [West] that we have come of age. Get us off your backs so we walk side by side,” he said.

The Mt Kenya East leaders also asked for the creation of a Mt Kenya Development Authority.

Raila was asked to revisit the one man, one vote, one shilling proposal as was in the BBI.

Members of the Njuri Ncheke council of elders, youth, MCAs and former MPs were present.

Njuki, the host, welcomed the ODM boss to freely campaign in the region, assuring him of support unlike in 2013 and 2017.

“It is well-known that since 2002, Raila has suffered because of the incitement levelled against him. I am happy here today to say the door is open for you.”

“Many have come and we have seen them. However, there is a difference. That is why we will be with you. Don’t forget us,” the governor said.

“As my colleagues have said, we feel disadvantaged as no project has ever been completed and is used as a begging tool during elections,” Njuki added.

Munya said, “There is a God’s moment and that of people. Raila’s is clear. The signs are there. Those not believing had better come and join us."

"The people who said they had climbed the mountain are now realising they were misled. Raila got it right. We are not coming down. He will take us where we want to go,” the CS added.

Kiraitu added, “It is hard to preach to the converted. We have accepted Azimio la Umoja as Mt Kenya East. There are all reasons for us to stick together.”

Wambora said, “We welcome Raila to Mt Kenya East. We have heard a lot of stories and we are not worried about those out to show off around here.”

“As Mt Kenya East, from now on, we will work with you. We shall be coming to Mt Kenya West. We shall all come to the Nairobi meeting. I want to assure you of our unwavering support,” Wambora said.

“We will help you bring back the economy. He is a professional, a good leader. Kenya is in safe hands with him.”

Kieni MP Kanini Kega said, "In 2022, we will be choosing between a leader and a dealer...Do you want a leader or a dealer? We want a leader who is here."

In his speech, Raila welcomed the support, saying he had laid down plans to solve some of the issues that were presented before him.

“We have spoken with Munya at length on reforms in the agriculture sector. We have a clear policy on those issues,” the ODM leader said.

Raila also pledged to deal with cattle rustling, as well as respond to concerns of the effects of drought in the area.

“We will construct Grand Falls Gitonga to deal with issues of food production. We will control the water to avoid flooding in Garissa,” he added.

The ODM leader also explained the background of the Azimio la Umoja initiative, saying the region would not be forgotten, having produced most of the country's pre-independence heroes.

“We must first be united in order to deal with these issues. That is the idea of Azimio la Umoja. We will be able to lift this country to where we want it to be. Everything is there [policies],” Raila said.

“In the bus, we have resolved that we want Raila. There is a reason. We cannot take children to school and then give them wheelbarrows. If they are schooled, we want them to get meaningful jobs,” he said.

Siaya Senator James Orengo, who accompanied Raila, said,  “It appears you are building a very strong team like the one that was in the Kibaki administration. If you look at the team Raila is building, we are going somewhere.”

Karugu said, “I assure you that Nyeri is behind you. Women called me today and said they will support you because you have assured us of peace and unity.”

Muriithi said Mt Kenya has 10 counties whose residents value work. “Work gives us dignity. Our economy is worth Sh27 billion dollars…bigger than 34 different African countries…I am shocked that someone wants to take that economy and put in a wheelbarrow.”

ODM leader to be hosted by all three Mt Kenya East governors.
News
1 month ago

Raila to storm Ruto backyard next week in 2022 vote-hunt

Says he has no problem with any leader from Rift and differences with DP are political.
News
1 month ago