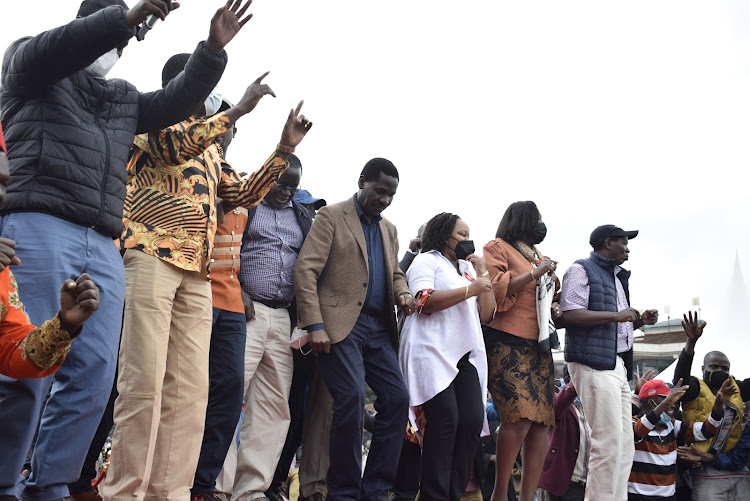 Mt Kenya leaders at Kenya Methodist University grounds in Meru on Saturday after they passed a six-point resolution to guide the region in the 2022 polls.
Image: Dennis Dibondo

Laikipia Governor Nderitu Muriithi’s takeover of the Party of National Unity could escalate the battle among Mt Kenya bigwigs angling to be  Raila Odinga’s running mate.

It is almost given that Raila would pick his second in command from Mt Kenya region, President Uhuru Kenyatta’s backyard, in his battle against Deputy President William Ruto.

The Star has established that Muriithi could have quietly assumed the leadership of retired President Mwai Kibaki’s PNU outfit, placing him at the centre of the battle for Raila’s running mate.

Raila’s ODM party has started plans to sign a political pact with PNU, as the former Prime Minister prepares to unveil a gigantic political alliance ahead of the 2022 polls.

However, Muriithi’s leadership of PNU could complicate Agriculture Cabinet Secretary Peter Munya’s 2022 game plan given that he is still a party member but nursing bigger ambitions.

In an indication of the simmering tensions between Munya and Muriithi over the leadership of the PNU outfit, their open rivalry played out at a dinner event last Thursday.

Speaking after political leaders, among them Raila’s allies, endorsed a political deal with PNU, Munya insisted that the party has an existing marriage with the Jubilee Party and which must be respected.

“For avoidance of doubt, so the media does not say PNU and ODM have merged, PNU is in a coalition with the Jubilee Party. I am a PNU member. We should take cognisance of this,” Munya said.

PNU and ODM top officials had organised what looked like a joint fundraiser at a city hotel where giant banners were emblazoned with blazing blue twin torches and ripe orange symbols.

During the event, ODM secretary general Edwin Sifuna led top party luminaries in praising Muriithi for showing courage in “holding our hand in scaling the mountain”.

When reached for comment about the jostling for the heart and soul of PNU, Muriithi who has taken a central place in Raila’s Mt Kenya campaigns, downplayed the issue.

“Munya and I are all siblings raised in the Kibaki court of world view and values system. Whoever gets it with the approval of delegates and PNU membership will be in good stead to lead us,” he said.

It has emerged that while Muriithi is formally awaiting the National Delegates Conference to endorse him as the PNU boss, he has started to position the outfit in the larger 2022 succession matrix.

The governor yesterday insisted that PNU was engaging ODM based on defined rules of partnership as provided for in the PNU constitution.

During his tour of Isiolo on Saturday, Raila had introduced Muriithi as the leader of PNU, saying the party is part of his 2022 plan.

“This is not a love affair but an engagement based on defined PNU aspirations, pursuits and interests in good and progressive governance, economic and political pillars,” the governor said.

He went on, “PNU partnering with ODM is in pursuit of the pending business in that vision.”

Muriithi said the retired President’s manifesto was conceived in a 16-point compact document unveiled by Kibaki in 1997 and whose biggest deliverable, he said, was the 2010 Constitution.

Observers say Muriithi’s push for the ODM-PNU pact and his visibility in Raila’s campaigns has thrust him to the status of first among equals angling for Raila’s attention.

Three weeks ago, Raila spent three days in Nanyuki town where he was hosted by Muriithi for meetings with business people, the youth and women delegations.

Raila and Muriithi rode in the governor’s official car from Nanyuki and addressed impromptu rallies in Nyeri, Murang’a, Kirinyaga, Kiambu and back to Nairobi after a “triumphant entry” into Mt Kenya.

Muriithi’s takeover of PNU comes at a time when Kibaki’s name is popping up in the Uhuru succession battle owing to his track record.

This is despite the fact that Kibaki has maintained a low profile since leaving office in 2013 and handing the baton to his godson, President Uhuru.

In 2017 for instance, Kibaki came out of retirement to campaign for Muriithi as he sought to become Laikipia governor.

He has been to Nyanza, Western, Coast and Rift Valley.
News
7 months ago

How Raila’s fortunes are changing in Mt Kenya