Our forces have contributed to global peace, Uhuru says

Uhuru noted that terrorists activities have reduced in the country, thanks to defence forces.

• The president said the government will extend affordable housing to soldiers.

• He also lauded the families of the Defence forces for the unwavering support that they have given the troops to undertake their core mandate.

President Uhuru Kenyatta has said that his government will seek to improve the state of the houses being used by the soldiers as they serve the nation.

The president spoke on Saturday at Kahawa Garrison in Kiambu County during the commemoration of Kenya Defence Forces Day 2021.

“The Govt will also extend affordable housing under the big 4 agenda to our soldiers and I intend to break ground later this year,” Uhuru said.

The president noted that terrorist activities have significantly reduced, thanks to the action of KDF and, other security agencies working under the multi-agency framework.

“Our forces have contributed to global peace, stability, and sustainable development. Through that service, as peacekeepers, you have brought pride to our nation and flag,” Uhuru said.

He also lauded the families of the Defence forces for the unwavering support that they have given the troops to undertake their core mandate.

“As a proud Commander in Chief, and on behalf of a grateful he entire nation, I shall never tire of appreciating you for your commitment, excellence, and sacrifices...you are a role model for others.”

To commemorate the day, the president who was accompanied by First Lady Margaret Kenyatta unveiled a new Level 4, 150-bed capacity military hospital.

He was accompanied by the Defence CS Eugene Wamalwa, who said that the defence forces shall continue to defend and protect our sovereignty and territorial integrity. 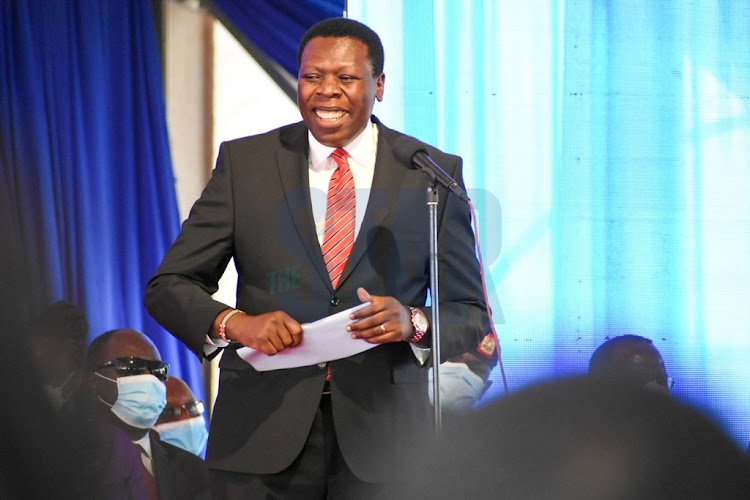 Defence CS Eugene Wamalwa during the celebration of the 10th anniversary of the Kenya Defence Force at Kahawa Garisson on October 16,2021.
Image: MERCY MUMO

Earlier during the day, the president and the First Lady presided over the official opening of an Intergrated Molecular Imaging and Hospitality Centre at the Kenyatta University Teaching, Referral, and Research Hospital.

The ultra-modern IMIC is the first of its kind in Kenya and the region and was developed as part of government efforts to expand access to cancer treatment in the country.

The centre has the capacity to host up to 100 patients and their families during their stay at the hospital.

The centre has a capacity to host up to 100 patients and their families during their stay at the hospital.
News
1 month ago
by KEVIN CHERUIYOT Online Journalist
News
16 October 2021 - 17:53