Many households have bad smell due to the carcasses of cows that are rotting within their compounds.

Despite having meat in plenty, residents prefer eating Ugali with Omena arguing that the meat  is tasteless and would only be good after drying. 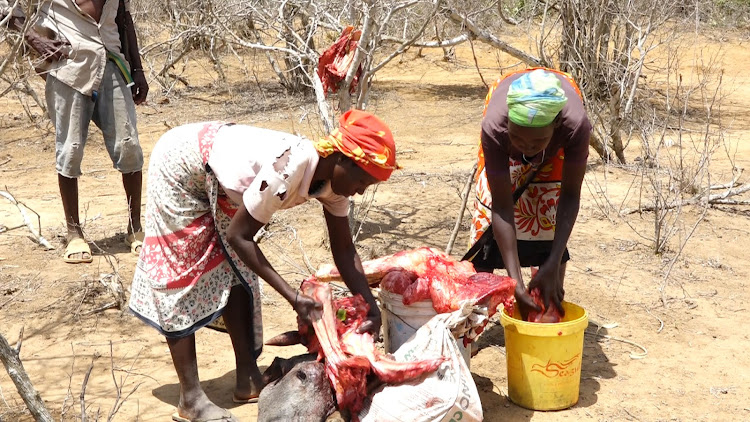 Naomi Kaingu packs meat from a cattle that died due to hunger to go and try her luck by selling the meat at Sh. 50 or Sh. 100 in Ngite area Ganze constituency
Image: ALPHONCE GARI 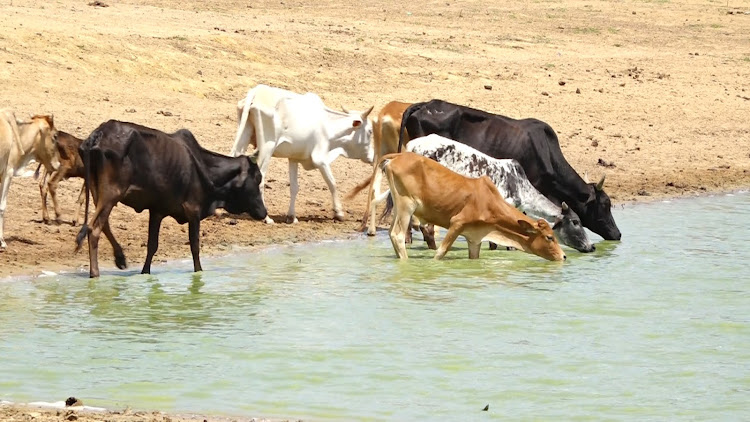 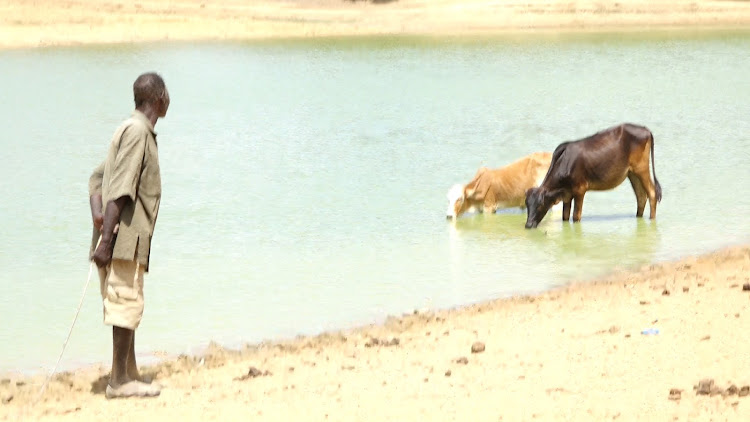 A Man looks over as some of his cows drink water at Ngite Water pan in Ganze constituency Kilifi county which has been hard hit by drought
Image: ALPHONCE GARI 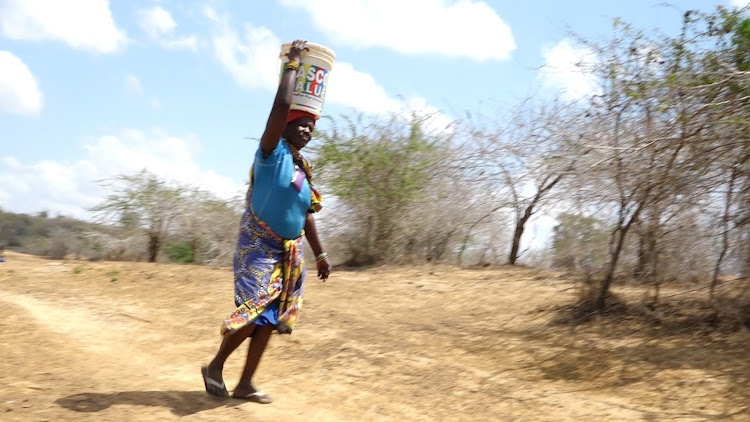 A woman carrying water from Ngite water pan in Ganze constituency which is the only remaining water pan in the area serving both human and livestock
Image: ALPHONCE GARI 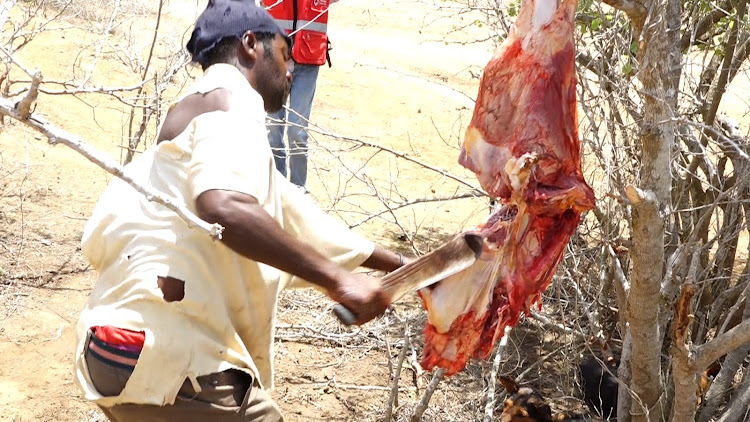 A man subdivides cow's meat which died as a result of drought but the owner decided to slaughter it and sell the meat at a throw-away price at Ngite area in Ganze constituency
Image: ALPHONCE GARI 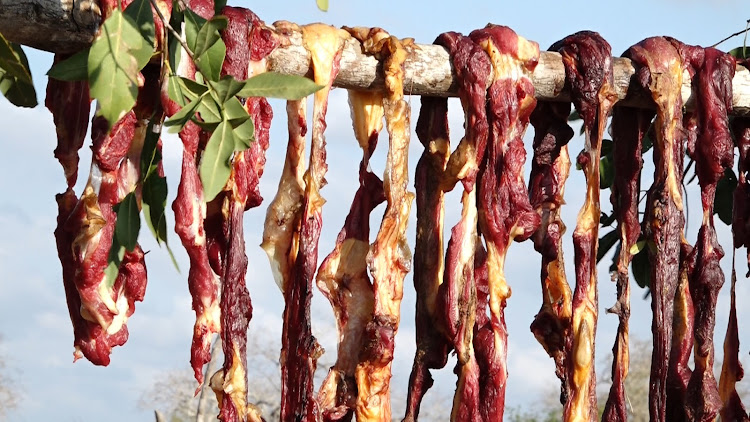 Meat is being dried under the sun to be consumed at a later date after the cow died of drought in Thithima village Mryachakwe Ganze constituency
Image: ALPHONCE GARI 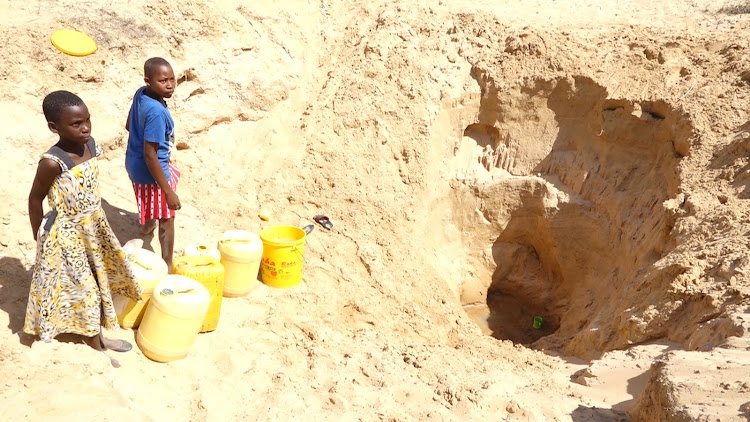 Children drawing water from a well they dug in Mitsedzini area Ganze constituency. They have to wait for hours to fill a 20 liter jerrican.
Image: ALPHONCE GARI

Ganze residents are now forced to slaughter their livestock as drought continues to bite.

Residents are complaining that their cows cannot fetch more than Sh1, 000 at the markets because they are very weak.

Despite government intervention to plan to buy livestock from the pastoralists, the residents say they have continued to lose animals in high numbers.

Journalists toured some of the remotest and worst-hit areas and came face to face with the disaster.

Carcasses of cattle are all over, some surrounding even homes. This is making it difficult for the victims to eat well.

At Thithima village in Mryachakwe area, journalists came across a family that had slaughtered a cow that was about to die. The family opted to dry the meat under the sun hopping to eat it at a later date.

Interestingly the residents were eating Ugali and Omena and when asked why they said the meat was tasteless and would only be good after drying.

It was evident that there was a smell of rotten carcasses at most homes after cattle died due to lack of food and water.

Karisa Muhambi, a resident of Thithima village, said the drought had really affected them as their livestock were dying at a very alarming rate.

Muhambi said he had lost seven cows and the eighth one died that morning but they decided to skin it and dry the meat as a preservation measure.

"We are drying the meat so that it becomes a meal later, there are 20 cows left but we have not gotten any support. We urge the government to intervene and give us food and livestock feeds to prevent them from dying," he said.

He said they have been able to get only three kilos per household from the relief food which is being given by the government including rice, beans, and maize.

Currently, he said, many children are not going to school because of the famine.

Kazungu Kenga from Mafingoni village in  Mitsedzini sub-location said he had 26 cows but all died and is  now left with only 11.

He said water is very scarce and the cattle have to cover over 15 kilometers to Ngite village to quench their thirst.

"My cattle are dying at a very alarming rate and do not know if the remaining ones will survive," he said.

Kenga said he wanted to sell some of his cows to take his son to university but the broker told him he could not pay even Sh 1500 per cow as  they are too weak.

He said they are forced to buy food in shops. At times it is difficult to get the cash leaving them without food, he explained.

"If you have the money you go to as far as Tezo in Kakanjuni but if you are poor your animals will die we call upon the government to come and drill boreholes," he said.

Naomi Kaingu from Ngite village said she had 13 cows but 11 died and is left with only two which are also in a bad state due to the drought.

Kaingu said she decided to slaughter the cattle which died the previous night and plans to sell at a throw-away price so as to get money for food.

We found her at Ngite Water pan, the only one which still has water in the area, trying to carry the meat and take it home.

"We have no food, water is a major problem, the livestock are finished, this one I will take it home and sell it at Sh 50 or Sh 100 and see if people will buy," she said.

Kaingu said they got three kilograms of relief food which was distributed at Vitengeni.

Ponda Chome from Migodomani said a cow worth Sh 15,000 is now difficult to sell at Sh 1000 because the animals are very weak.

He said Ngite water pan which used to be blue is now greenish in color and the water is shared among animals such as cows, goats, dogs, chickens and human beings.

"We are appealing to the government to come and begin an off-take program and buy the livestock from the farmers," he said.

Jumwa Chengofrom  Katsugini village in Madeteni area said she lost over 20 cattle as they had to go for over 15 kilometers to get water in Ngite.

She said the area has no grass to graze the animals.

"We have no water at all some of the water pans are damaged and even if it rains they will not hold water. The government can only bring water to help us during these difficult times," she said.

So far he said 6,500 cows have died in Kilifi and over 4,000 others died in Tanariver county and that the number could be more due to the drought situation.

"We are also experiencing a huge number of deaths in Lamu, most of the cows we lost belong to pastoralists from Garissa and other parts of North Eastern who are looking for pasture. The situation is deteriorating day by day as there is no rain expected soon," he said.

Musa said they have identified 7,500 households in Kilifi to be supported with cash transfers and will get Sh 5,500 for the next two months.

The regional manager said the solution is to begin a cash transfer program as people will be able to choose what kind of food to buy.

Musa said less than 20 percent of the water pans have water and it is not fit for human consumption.