Winning hearts and minds: The other side of KDF's war in Somalia

Have initiated several programmes to win the support of the communities in their areas of operation.

• African Union Mission in Somalia's sector II commander Brigadier Jeff Nyagah said the heart and mind are critical to the matrix of winning the war. 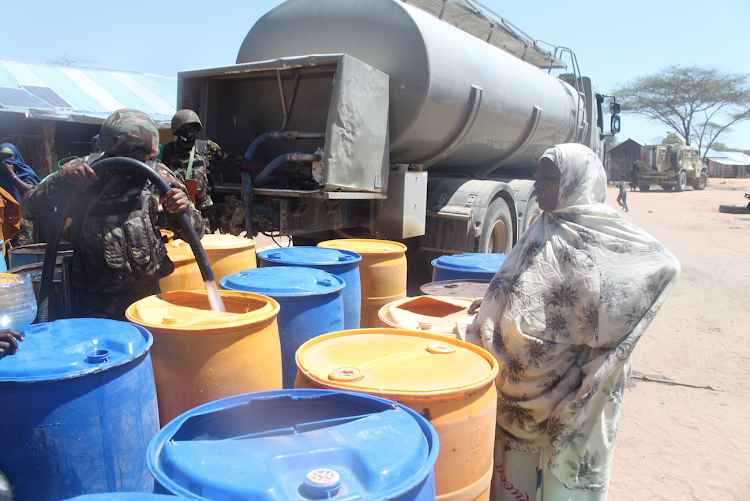 Bunkers, armoured personnel carriers, attack choppers, armed soldiers and machine guns mounted on vehicles are some of the common sights on battlefields in Somalia.

Kenya sent its troops to Somalia in an exercise of the right of self-defence after a string of attacks in the country.

While complex weaponry and combat gear are key in handling the task at hand, the soldiers have changed tack and are using other means to achieve their mission in Somalia. They are trying to win the hearts and minds of the communities in their areas of operation.

African Union Mission in Somalia's sector II commander Brigadier Jeff Nyagah said the heart and mind are critical to the matrix of winning the war.

KDF has initiated several programmes to win the support of communities where they are conducting operations.

“The strategy helps in promoting socio-economic developments, stabilising the operating environment and enhancing closer cooperation with local communities to alleviate suffering,” he told the Star.

In Dhobley town, for example, the ninth contingent of KDF troops constructed a police station for Somali officers.

Before the station was built, Somali police in the area used a tree shade as their office.

In Kulmis and Tulla Burqawo villages, KDF water bowsers have been supplying water to residents. The areas receive less rainfall and residents have trouble getting fresh water.

According to Unicef, only 52 per cent of the population in Somalia have access to a basic water supply.

The troops have also been donating food and medicine.

“It's important to note that these projects are initiated from a community level. We at Amisom convene key engagement meetings where local leaders give the needs of the community, which are then certified by the district commissioner,” he said.

Wire said local youth are prioritised in providing labour for the projects.

Inside the Dhobley Forward Operating Base, there is a smart farm with poultry, tree nursery and fish.

The farm was set up so community members could learn about alternative sources of income, head of the project, senior sergeant Godfrey Adawo, said.

“Terrorism is no longer won by barrels and guns only,” he said.

A team of female soldiers has also been deployed to engage the women in the community.

Due to social and cultural barriers, it is difficult for male soldiers to reach out to them. The team has so far trained six local women in midwifery skills.

“They have also trained us in matters of sexual-based violence and female genital mutilation. We didn’t even know where to report some of these things,” she said.

Captain Getrude Abiyo, the leader of the team, said, “Women and children bear the brunt of war. These women stay at home, raise children, own small businesses and are key in peace resolution processes.