Uhuru to meet US President Biden at White House on Thursday

The two Heads of State will discuss the strong US-Kenyan bilateral relationship.

• Also in the agenda according to Psaki is discussion on the need to bring transparency and accountability to domestic and international financial systems.

•"They will also discuss efforts to defend democracy and human rights, advance peace and security, accelerate economic growth, and tackle climate change,"Psaki said in a statement on Tuesday evening. 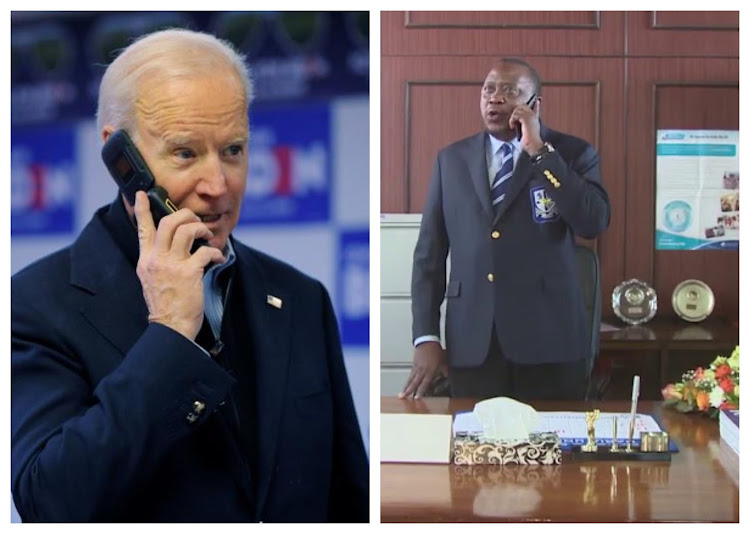 President Uhuru Kenyatta will on Wednesday be hosted by his United States counterpart Joseph Biden, Jr. at the White House in Washington DC.

US White House Press Secretary Jen Psaki announced the meeting in a statement saying the two Heads of State will discuss among other issues, the strong US-Kenyan bilateral relationship.

Also in the agenda according to Psaki is a discussion on the need to bring transparency and accountability to domestic and international financial systems.

"They will also discuss efforts to defend democracy and human rights, advance peace and security, accelerate economic growth, and tackle climate change," Psaki said in a statement on Tuesday evening.

"The meeting will build on the leaders’ phone call in February and on President Biden’s commitment to the U.S. partnership with Africa based on principles of mutual respect and equality. "

State House on Wednesday said during the talks, President Kenyatta and his American host are expected to discuss several matters of mutual interest to Kenya and the United States of America among them peace and security, economic partnerships and climate change.

"The Thursday, 14th October 2021 meeting will be a continuation of a telephone conversation the two leaders held in February this year and will make President Kenyatta the first African Head of State to be hosted by President Joseph R. Biden, Jr. at the White House since his inauguration on 20th January this year," State House Spokesperson Kanze Dena said.

President Uhuru Kenyatta is currently in the States where he chaired a UN Security Council high-level meeting.

Kenya is not only a UNSC member but also holds the monthly rotational presidency of the Council this October.

During the meeting, Uhuru told world leaders to end the silo mentality that has seen some states - largely in Africa -  excluded from key decisions affecting the globe.

The poor management of diversity has accelerated the threats to international peace and security.

Kenyatta called out on leaders to deal with the inequality between states saying it has caused billions to lack jobs and livelihood opportunities.

“A necessary start is to restructure global cooperation and governance so that it truly accords to the principle that all people and countries are of equal worth,” Kenyatta said.

He castigated the use of one-size-fits-all prescriptions and templates by powerful global institutions in dealing with Africa’s challenges.

In his speech as Kenya began its month-long chairmanship of the UN Security Council, the president said leaders hold the key to uniting nations.