•Kenyatta called out on leaders to deal with the inequality between states saying it has caused billions to lack jobs and livelihood opportunities.

•The President regretted that inequality within and between states was too often the result of exclusion on the basis of identity. 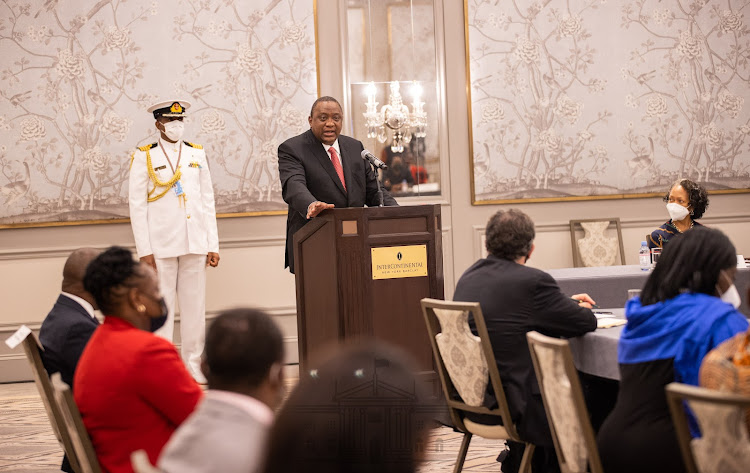 President Uhuru Kenyatta during the signing of private sector agreement that seeks to expand trade and investments between Kenya and the United States of America, Monday October 11, 2021.
Image: PSCU

President Uhuru Kenyatta has told world leaders to end the silo mentality that has seen some states - largely in Africa -  excluded from key decisions affecting the globe.

The poor management of diversity has accelerated the threats to international peace and security.

Kenyatta called out on leaders to deal with the inequality between states saying it has caused billions to lack jobs and livelihood opportunities.

“A necessary start is to restructure global cooperation and governance so that it truly accords to the principle that all people and countries are of equal worth,” Kenyatta said.

He castigated the use of one-size-fits-all prescriptions and templates by powerful global institutions in dealing with Africa’s challenges.

In his speech as Kenya began its month-long chairmanship of the UN Security Council, the president said leaders hold the key to uniting nations.

He said the unity of nations could be achieved through the individual decisions leaders make towards ending the deep political differences that aggravate the challenges.

The President cited his March 2018 handshake with ODM leader Raila Odinga as a demonstration of how countries can thrive if leaders unite.

“We did it to show Kenyans that our country’s cohesion and unity was more important than our political rivalry,” President Kenyatta said.

The President told the New York meeting that the handshake created a powerful surge of hope in Kenyans.

“Tempers cooled and we remembered that we were part of a Kenyan family and not defined by political rivalry,” he said.

The President said the handshake was more than a political gesture but an innovation that sought to insert the safety, unity and prospering of Kenya at the core of our politics.

“We sought to build those safety rails into how the state is structured and works through a national conversation,” he said.

He exuded confidence that Kenya will continue to build and protect its unity saying states can prevent conflict and be exporters of stability and security to their neighbours.

Uhuru regretted that inequality within and between states was too often the result of exclusion based on identity.

He said there was the need to change the national and global economic and governance systems to manage diversity more effectively.

An escalation of a social or political conflict finds the state much less able to mitigate the crisis.
Opinion
1 week ago

In this respect, he said climate change adaptation commitments should be directed to accelerating development investment and job creation in the developing world.

The head of state said the UN, regional organisations and donor states should focus on state capacity building as opposed to the exclusive focus on good governance.

“The United Nations and its peace-building initiatives should include diversity management as a component of peacebuilding and state stabilisation,” President Kenyatta said.

He called for collaboration between states, the UN system and social media companies to combat hate speech and incitement.

“This can include an agreed global code of conduct by companies, and the development of early warning tools to detect escalation trends and facilitate pre-emptive measures,” he said.

The President rallied states to take up steps he believes are essential in the management of diversity that supports state-building and sustainable peace.

He cited the situation of the membership of the council saying it lacks transparency and inclusion.

The President said the exclusion was the reason communities and countries don’t benefit from their natural resources, poses climate injustices, and unfair trading system.

He held that failure to deal with the inequalities provided fodder for terrorism, insurgencies, xenophobia, hate speech, divisive tribalism and racism.

The President also made a pitch to world leaders to respond to problems arising from electoral processes so that they don’t stage divisions but serve to legitimise the state.

He said that without dealing with the core issues, elections become zero-sum games in winner-takes-all contests that appear to pit racial, ethnic or religious identities.

President Kenyatta said the images of desperate men and women risking their lives in pursuit of economic opportunity point to a failed international political and economic system.

He called on world leaders to take up a multilateralism approach in dealing with common issues like climate change, Covid-19, and economic downturns.

The President cautioned that vaccine nationalism, travel bans and red listing have only inflamed the divisions between the rich and the poor states.

He argued that the situation was a manifestation of the inability to deal with a diverse world.

“They are major factors in most conflict situations that the Security Council is seized of. We need to deal with it,” the President said.

Uhuru and the UN boss are expected to discuss several subjects of mutual interest to Kenya and the UN.
News
1 week ago