Says he was mandated to reach out to Mudavadi, Wetang'ula, Jirongo and Kituyi so that the region can move forward as a unit

• Atwoli said the meeting was meant to assess community preparedness for negotiations.

• Atwoli said other communities were already negotiating their stakes in the next government with the leading presidential hopefuls, and the Luhya community should not be left behind. 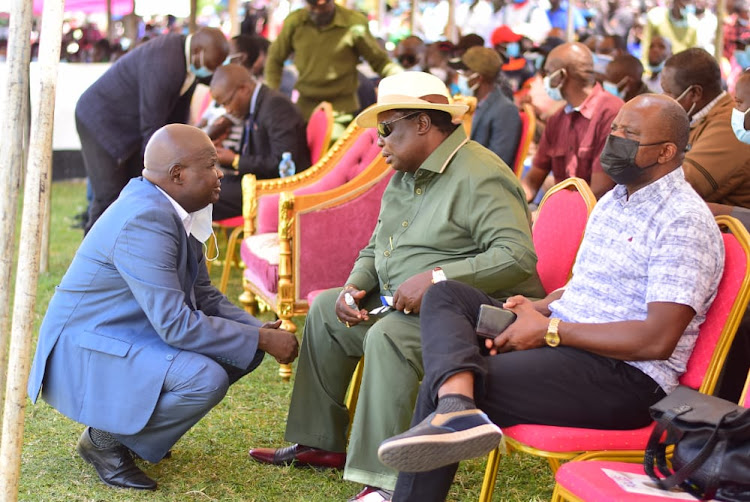 A section of leaders in Western has started discussions to position the Luhya community ahead of the 2022 general election.

They held their first meeting at Kakamega’s Golf Hotel on Sunday under the stewardship of Cotu secretary general Francis Atwoli.

They mandated Atwoli to coordinate the initiative to negotiate on behalf of Western Kenya in the next government.

Atwoli said the meeting was meant to assess community preparedness for negotiations.

“The meeting was not meant to alienate anyone from the community. It was meant to be all-inclusive for the willing. Because of our understanding of our community, you cannot force people in a certain direction,” he said.

Atwoli said the meeting mandated him to reach out to ANC leader Musalia Mudavadi, Ford Kenya's Moses Wetang’ula, UDP’s Cyrus Jirongo and former UNCTAD secretary general Mukhisa Kituyi so that the region can move forward as a unit.

“We resolved that we will negotiate with any leading presidential candidate from the handshake team in the formation of the next government as a community,” Atwoli said.

“Although our sons are in the One Kenya Alliance formation, the alliance has not named its flagbearer. Until then, there are two horses—Raila Odinga of ODM and Deputy President William Ruto,” he said.

Atwoli said other communities were already negotiating their stakes in the next government with the leading presidential hopefuls and the Luhya community should not be left behind.

“You can delay and by the time you wake up the whole government is already shared,” he said.

Atwoli and the four governors who attended the meeting have been campaigning for Raila’s presidential bid.

“The four governors from Western are misusing Atwoli to look for landing space after their terms in office expire next year. Others are seeking reelection and want to hide behind Atwoli in the name of supporting Raila,” he said.

The plot will fail because the people had already made up their minds that they want to back one of their own, Savula said.

Khwisero MP Christopher Aseka said the initiative is part of ODM's strategy to revive itself in Western.

"Atwoli has a constitutional right to support whoever he wants and he should not be criminalised for that. We want our party leader Mudavadi to reach out to the four governors and Atwoli to find out what they are up to," Aseka said.