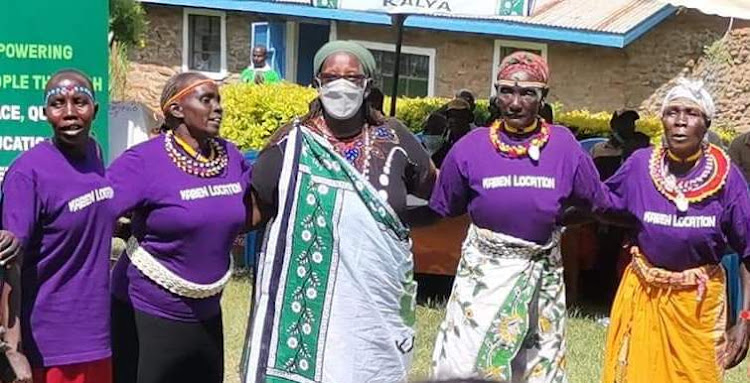 KILIMO CAS Linah Kilimo (C) with women at a peace meeting in Kerio Valley on October 1, 2021.
Image: BY MATHEWS NDANYI

Livestock Chief Administrative Secretary Linah Jebii Kilimo says the collapse of development projects in the Kerio Valley due to banditry has increased insecurity in the region.

She says it's only through the economic empowerment of communities living in the valley they will be able to change their lifestyles and abandon cattle rustling.

Kilimo wants the national and county governments to prioritise the revival of the collapsed projects, as well as focus on education in the marginalised areas.

This is to wean off residents from their over-reliance on livestock for survival.

“Poverty has forced the youths to engage in cattle rustling and unless we give them alternative livelihoods, banditry will remain a major problem in Kerio Valley," Kilimo said.

Speaking during a peace meeting at Liter trading centre along the boundary of Elgeyo Marakwet and West Pokot counties, Kilimo said the region should be brought into the country’s mainstream economy as one of the long-term efforts to solve the rustling problem.

“The national and county governments should initiate irrigation schemes and other income-generating activities in the Kerio Valley to uplift the lives of the people,” she said.

By implementing such development initiatives, she said the youths in the affected areas would be kept busy at all times and there would be little room for acts of lawlessness.

The CAS said acts of lawlessness reduced when the Kenya Red Cross launched irrigation projects in the Kerio Valley of Marakwet East and Tiaty constituency between 2005 and 2013  because most youths were kept busy on the farms.

The irrigation projects are among those that collapsed along with others initiated by county governments. Many government staff also fled from areas affected by cattle rustling, abandoning the projects.

She noted that Kerio Valley was endowed with rich agricultural soils suitable for farming activities, which, if well utilised, would transform the lives of the locals and the country at large.

Kilimo is credited with helping restore peace along the West Pokot and Marakwet borders during her 10-year tenure as MP from 2002 to 2013.

She has urged leaders to work closely with the provincial administration and security personnel in maintaining security at all times, adding that no development can be realised in the absence of peace and security.

Kilimo urged elders to help the government address challenges related to insecurity. She also appealed to residents to adopt harmonious relations with their neighbours.

“It is sad that the Pokot and Marakwet speak the same language and even marry each other, while on the other hand, we are turning against our brothers and sisters. We must stop this culture and embrace peace,” Kilimo said.

Elgeyo Marakwet county commissioner Ahmed Omar said the government was committed to the fight against lawlessness.

He urged residents to work closely with the police, noting that the war on cattle rustling can be won if residents cooperate with government agencies in eliminating the vice.

She said although there was some progress in the war against FGM, more needs to be done to completely eradicate the practice.

“Let’s work together and support efforts to ensure that FGM is eradicated by 2022. It’s through concerted efforts that cases of female circumcision can be eliminated,” Pareiyo said.

She urged parents not to discriminate against children based on gender, especially on matters of education.

Pareiyo noted that gender equality is not only a fundamental human right but also a necessary foundation for a peaceful and prosperous nation.