The Constitution stipulates that a county chief can only hold office for a maximum of two terms. 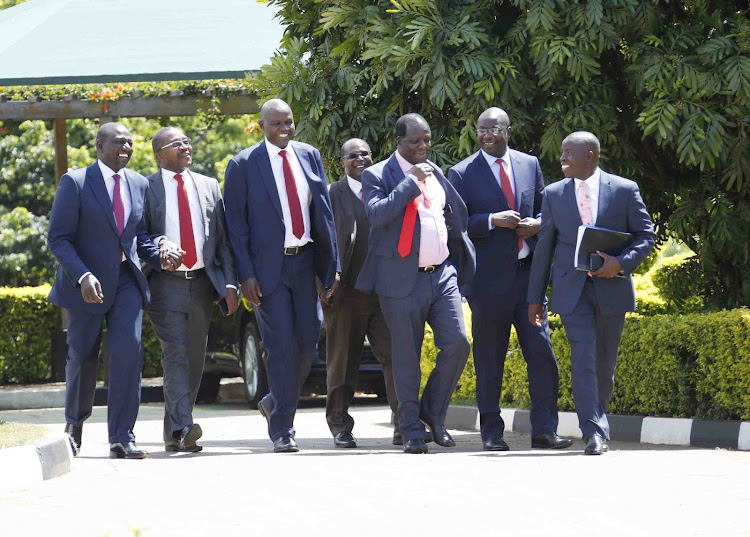 Deputy President William Ruto with some governors when he chaired the Intergovernmental Budget and Economic Council meeting in Karen, Nairobi, on February 18, 2020.
Image: DPPS

At least six of the 21 governors whose terms constitutionally end next year have begun scheming their political future.

The Constitution stipulates that a governor can only hold office for a maximum of two terms. Of the exiting governors, two seek to succeed President Uhuru Kenyatta, three have said they will contest for senator position, while one is eyeing the National Assembly.

Machakos Governor Alfred Mutua, his Murang’a counterpart Mwangi wa Iria and Makueni's Kivutha Kibwana are in the crowded race to State House. Kibwana now appears to be at a crossroads.

Hassan Joho (Mombasa) and Wycliffe Oparanya (Kakamega) had declared their interest in the presidency but have since lost steam as campaigns heat up. The ODM deputy party leaders have backed off and thrown their weight behind their party leader, Raila Odinga.

Kericho Governor Paul Chepkwony had initially indicated that he would run for senator. However, on Monday, the former Moi University don said he had yet to make up his mind on his next move.

“My focus now is to complete ongoing development projects, that is the mandate that I was given by the people of Kericho. I do not want to behave like a hyena with divided attention to several things at once. Once my term is over, I will listen to what the people will say,” Chepkwony told the Star on the phone.

Uasin Gishu's Jackson Mandago will seek to dethrone Senator Margaret Kamar. He dismissed his critics who said the position should be a preserve of lawyers.

“The people will decide who will be elected MP, MCA, governor and woman representative, but for the Senate position, leave it for Mandago. There are some people moving around the county saying a senator should be a lawyer. Is Kamar a lawyer?” he posed to a gathering last week during a public meeting in his county.

Kamar is an experienced politician and deputy speaker of the Senate. She is among politicians in the region not allied to Deputy President William Ruto and his UDA party. Kamar previously served as Eldoret East MP. The senator ran for governor against Mandago in 2013 but lost.

Mandago is a close ally of the DP and will give Kamar a run for her money in Ruto's backyard where UDA is expected to dominate in the next election.

In Mandera, Governor Ali Roba a week ago told a meeting in his county that he was under pressure from residents to run for senator.

“I have been receiving calls and messages from opinion leaders, residents and political shapers inquiring from me which seat I will be seeking after my term expires. In fact, some really want to see my name on the ballot,” he said.

The majority of the county chiefs yet to declare their next moves have kept their cards close to their chests, with some reported to be exploring options that will keep their political careers alive.

Those from Nyanza not clear about their next steps are James Ongwae (Kisii), Okoth Obado (Migori) and Cyprian Awiti (Homa Bay).

In Western, Busia's Sospeter Ojaamong had initially indicated that he would run for Teso South parliamentary seat currently held by Geoffrey Omuse, who says he will be defending the seat.

Kingi has formed a party he hopes to use to negotiate his next power plan, while Nanok and Obado are working closely with DP Ruto.

Governors want their term limits removed to allow them seek re-election as many times as possible. Article 180 (7) of the Constitution says “a ...
News
2 years ago

'It will open the floodgates of bad governance '
Counties
1 year ago
by GIDEON KETER Political Reporter
News
12 October 2021 - 06:05