Rare jumbo twins among those adopted in Amboseli

• The Amboseli ecosystem is home to about 1,800 elephants, with the highest population found in the Tsavo national parks at 14,000. 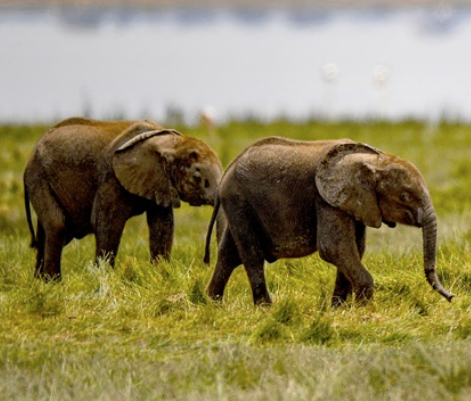 It is a rare occurrence for an elephant to give birth to twins.

In 2020, an elephant named Angelina delivered a set of twins – a male and a female in Amboseli National Park.

It was difficult for the mother to produce enough milk for two calves.

The calves became emaciated, and it was doubtful they would survive beyond six months.

Fortunately, elephant calves are weaned with vegetation at between three and four months.

By the time they are seven to eight months old, they are usually good feeders, which helps supplement their mother’s milk.

The twins reached their first birthday in February 2021 and are healthy.

They are one year and eight months old. They were on Saturday adopted by Elephant Cooperation and named Scotty and Scott.

The adoption and naming event was officiated by Tourism and Wildlife CS Najib Balala.

The 2021 Magical Kenya Elephant Naming Festival set a precedent that the tourism ministry would be working towards achieving every year going forward.

Balala praised the initiative as a move towards the inclusion of the public in conservation, as well as providing enough resources for the protection of jumbos in Kenya.

“We have raised 16.5 million so far this year. I congratulate all the namers and assure them that the funds will be used to ensure that our majestic elephants are well conserved," the CS said.

"We want to look at issues concerning human-wildlife conflict, tracking of the elephants through collaring as well as the construction of electric fences and community engagement.”

During the event at Amboseli National Park, elders from the Maasai blessed the ceremony.

He was born in 1972. He was first sighted when he was less than a year old.

Craig became independent in 1988 when he was 16 years old.

After independence, each bull chooses one of the “bull areas” in the ecosystem. Craig chose an area to the east, with the centre in the Kimani Sanctuary.

At 49 years, Craig is an alpha male in his prime.

EABL also adopted a 50-year-old Serian (Tolstoy). Tolstoy is one of Africa’s few remaining big tuskers. He is named after Leo Tolstoy, a famous Russian author.

Tolstoy belongs to the 'T' family, which means he is related to Tim, another one of Amboseli's well-known massive bulls.

Tim and Tolstoy inherited superior genes which ensure their place at the apex of the male elephant hierarchy in Amboseli. Massive tusks are the hallmark of Tim and Tolstoy’s family tree.

The Chandaria Foundation adopted a 45-year-old bull. This bull is a fighter. He was born into the most dominant family in Amboseli.

His mother Victoria was the matriarch who apparently bestowed on him vast amounts of confidence because he does not back down from challenges from any rivals.

Born in December 1976, the bull grew up in an enormous, successful family.

His mother died when he was 12 years old, but his older sister took over as matriarch and there was always a place for him in the family. He became independent in 1990.

At 45 years old, M321 is already a successful bull because of his fearless attitude that sees him challenge much older bulls.

He was once filmed whilst engaging in a fight with an older bull. He won.

The Amboseli ecosystem is home to about 1,800 elephants, with the highest population found in the Tsavo national parks at 14,000.

In recent years, elephant poaching has reduced significantly, leading to a surge in elephant populations in Kenya.

The first national wildlife census report shows Kenya is home to 36,280 elephants, representing a 21 per cent growth from 2014 when poaching was at its peak.

The increase has been thanks to a sustained government crackdown on poaching and the illegal ivory trade.

However, the report also notes that human-elephant conflict has increased in many regions within the country as a result of loss of habitat and competition in land use.