•Another contractor has also been claiming Sh17.8 billion from MOH for a contract entered into in the financial year 1992-93 at Sh196 million. 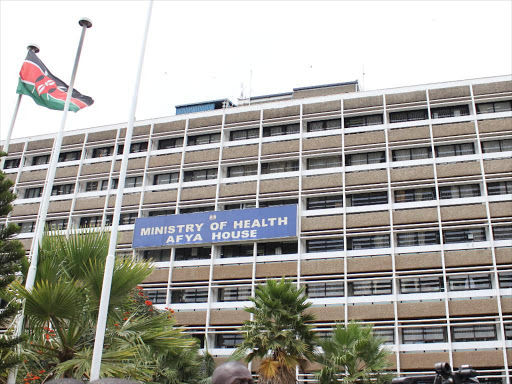 The Ministry of Health Headquarters at Afya House.
Image: FILE

A Moi-era supplier has petitioned the National Assembly to compel the Ministry of Health to pay him for anti-malaria drugs and equipment supplied nearly 30 years ago.

Diviesh Patel of Equip Agencies wants MPs to inquire into the circumstances under which the Health ministry has refused to pay him.

He raised concerns that the ministry has failed to pay him even after voluntarily waiving Sh65 billion of the debt.

Should the debt be paid in full, operations of the Health ministry stand crippled considering the sector was allocated Sh121.8 billion.

Patel argues that the government has neither accepted his offer to waive the debt to Sh15 billion nor demonstrated commitment to conclude the negotiations.

“The government’s refusal to pay the debt is a blatant affront to the company’s rights and has continued to expose the proprietors to uncertainty and bankruptcy,” he avers.

He holds that the ministry acknowledged receipt of the goods that met the specifications of the contract drawn on July 14, 1995 - the era of the late President Daniel Moi.

“The petitioner is seeking the intervention of the National Assembly to cause the Health ministry and National Treasury to pay Equip Agencies Sh80billion,” the petition reads.

“The payment is still in abeyance,” the petitioner said, adding that follow-ups at Afya House over the past 20 years have been in vain.

“If the matter is not immediately resolved, Equip Agencies Limited risks being rendered insolvent yet the company supported the government’s initiative to make Kenya a malaria-free country by supplying anti-malarial equipment and drugs,” the businessman states.

Patel further avers that the company has since suffered irreparable financial harm and is incapable of bankrolling its operations and meeting its tax obligations.

The arrears, he said, are to the tune of Sh3.6 billion inclusive of penalties with Equip Agencies’ assets listed for auction by financial lenders and Sh9 billion owed to overseas suppliers.

The Sh80 billion is in respect of a principal debt owed since 1995, interest and cost as decreed by the High Court in 2011 and upheld by the Appeals court in 2017.

Patel wants MPs to recommend, if necessary, budgetary allocation to the Health ministry to settle the decree amount as debt caused and interest accrued at the earliest opportunity.

He further wants MPs at the Health committee, where the petition has been committed, to make recommendations towards securing his property and economic rights.

Equip Agencies Ltd supplied anti-malaria equipment and drugs to MoH between 1995 and 1997 at Sh1.2 billion.

Patel argues that the ministry reneged on its contractual obligations and is yet to pay the company any money.

“This has adversely affected the company’s financial sustainability given that it had a legitimate expectation to recover the money used to source for the supplies on being paid by the government,” the petitioner avers.

Patel sought redress in the High Court which, in December, awarded Equip Agencies Sh1.8 billion, plus a compound interest of 18 per cent per year from March 1999.

The Court of Appeal, following an application by the government against the orders, upheld the High Court decision and ordered PS Health to pay.

Patel says in his petition that Health ministry has defied the decrees of both the courts which has seen the claims rise to Sh80 billion as of February last year.

Auditor General Nancy Gathungu had queried the outstanding debt saying that unless the ministry appeals against the claims, taxpayers will pay.

Another contractor has also been claiming Sh17.8 billion from the Health ministry for a contract entered into in the financial year 1992-93 at Sh196 million.

Gathungu raised concerns that the amounts have ballooned over three decades without the ministry resolving the situation.

The Ministry of Health is also yet to settle Sh1 billion which was a balance of an Sh1.8 billion debt that the court awarded a supplier in October 2015, the same earning an interest of two per cent per month.

“The failure by the government to appeal the awards will create a precedence that is likely to result in similar action by other suppliers,” the auditor said.

The auditor general says the ministry should either appeal the court award or settle the claims.
News
3 months ago
by MOSES ODHIAMBO Political Writer
News
11 October 2021 - 23:00