Party has been embroiled in endless wrangles since May last year 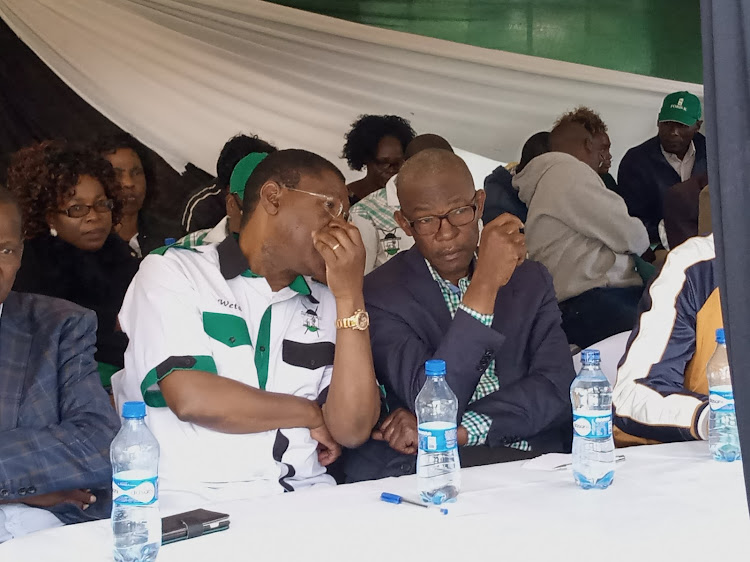 An advert by Eseli on Saturday said the agenda of the meeting will be preliminaries, adoption of agenda, approval of previous minutes, ratification of general gouncil resolutions 2016, the election of national officials, acceptance speeches and any other business.

The meeting has been planned for November 6 at Moi International Sports Centre Kasarani, Nairobi.

“Court order or no court order, the owners of the party—who are the registered party members—will be electing new leadership,” Eseli told the Star.

Wrangles in Ford Kenya started in May 2020 after a section of its leaders resolved to dismiss Wetangula on the grounds of gross misconduct.

While addressing the press after a delegates meeting, Eseli said the party had lost its ideals under Wetang'ula’s leadership.

Eseli has accused Bungoma Senator Moses Wetang'ula of hiding behind courts to remain as party leader.

“He has been obtaining one court order after another just to avoid the NDC, which will kick him out,” he said.

A faction allied to Wetang'ula has threatened Eseli and Wamunyinyi with legal action for convening the meeting.

National organising secretary Chris Mandu Mandu said Eseli is a former secretary and on suspension and is acting in contempt of court.

He said the party will take legal action against the Eseli faction and use all means to stop the “illegal” NDC.

“We call on our members to remain calm. There is nothing like an NDC called or convened by Eseli. Our members should not be bothered with the notice and we will deal with it,” he said.

A previous effort by Eseli to call an NDC hit a dead end after a government facility declined to host the meeting, citing a spike in Covid-19 infection.

Eseli had called the meeting at the Bomas of Kenya on November 21, 2020. He had indicated that the meeting's main agenda was to usher in new leadership. Even then, Wetang'ula dismissed the notice issued by Eseli.

On Monday, Eseli maintained that Ford Kenya is in violation of the law "as matters stand".

“Parties are suspected to hold elections regularly and in a transparent manner. The last time Ford Kenya held elections was in 2011. Our constitution says we should have elections every four years, meaning we were to have one in 2015 and another one in 2019” he said.

But Mandu Mandu maintained that the party is firmly under Wetang'ula in the One Kenya Alliance.

"Even if Eseli is still party's secretary general, the organs of the party should have sat set the agenda and the date, budget and venue. It cannot be a one-man show. I ask delegates to stay away from the meeting,” he added.

In August, Wetang'ula appeared to be facing a hurdle as he pursues alliances and coalitions following the death of the National Super Alliance.

Eseli wrote to the Registrar of Political Parties, saying Wetang'ula should not represent the party in any coalition agreements.

He also said he had written to ODM, asking the Raila Odinga-led party to withhold Ford Kenya's share of money from the Political Parties Fund.

ODM said it would withhold the Sh36 million share of Ford Kenya until the court decides who the genuine party leaders are.

As he made the remarks, Wetang'ula was in Makueni with his One Kenya Alliance counterparts drumming up support for the formation.

Wamunyinyi maintained that Wetang'ula has no mandate in Ford Kenya and cannot purport to enter into agreements with other parties.

“Wetang'ula should stop masquerading as a party official and engaging other party leaders.

"He should know that he is engaging other party leaders in his personal capacity. He should stop signing agreements on behalf of Ford Kenya,” Wamunyinyi said.

On July 31, Wetang'ula announced the party's exit from Nasa after chairing the National Executive Council, where members endorsed the withdrawal.

On August 3, Wetang'ula, ANC leader Mudavadi and Kalonzo (Wiper) wrote to the Registrar of Political Parties seeking to exit Nasa. They announced they would engage other parties as OKA.