Ng'eno has been on the run since 2018 when he obtained over Sh1.6 million from a man 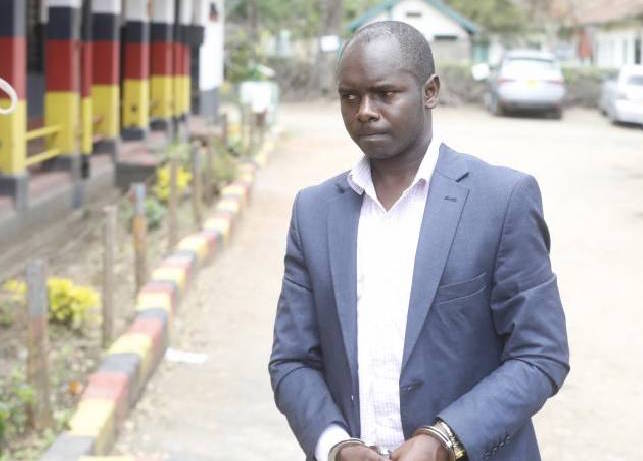 A 32-year-old man was arrested at the weekend after impersonating a magistrate at Nakuru law courts for three years.

Victor Kiprono Ng'eno had also posed as Devolution CS Charles Keter's younger brother to obtain money from unsuspecting people on the pretext he would help their relatives secure jobs in government.

He was also known as “Victor Keter”.

Ng'eno has been on the run since 2018 when he obtained over Sh1.6 million from a Nakuru man while personating a magistrate.

According to police investigations, Ng'eno, who was privy to an ongoing civil case involving the victim at the law courts, sought a meet up with him with promises he could expedite the determination of the case in his favour.

When he shook Ng'eno's hand in agreement after the fake assurance, the victim unknowingly signed in as a cash cow for the unforgiving imposter.

In the months that followed, the victim parted with Sh1,664,230 in the pursuit of justice, which to him had taken too long.

The victim was shocked when he enquired about the "magistrate" at the courts, only to be told that no one by Ng'eno's name and description was ever a judicial officer anywhere in the county.

The victim unsuccessfully tried to reach Ng'eno by all means previously used.

Devastated by the turn of events that regrettably left him poorer, the victim reported the matter to Nakuru detectives.

Ng'eno sneaked back to Nakuru county in his previous fashion and style months ago.

He said they are investigating whether the suspect had defrauded other people in the area.

“The suspect has been on the run after knowing what he did. He is suspected of defrauding the public,” Sunguti said.

He said they recovered several suspected fake employment letters from the Judicial Service Commission (JSC) from the suspect.

Investigations have shown the suspect had also promised to intervene in ongoing judicial matters to help one way or the other after receiving money from victims.

One of the victims, Samuel Soi, told police he lost Sh1.6 million after Ng'eno posed as Keter’s brother and pretended he would help him secure jobs for his two children at the Kenya Pipeline Company.

First, Soi told police he lost Sh100,000 to Ng'eno who had, while posing as a magistrate, promised to expedite in his face a civil case that was pending at the Nakuru law courts.

The money was paid between March 2018 and December 2019 when Ng'eno vanished from the town.

The victim, through a lawyer, complained to police more than three times that the suspect was between Bomet and Nakuru.

He said the money he paid the suspect was his retirement package and needed to recover it.

Ng'eno was arrested on October 9 and detained at Nakuru police station cells.

The team investigating the incident want anyone who has been a victim of the suspect to report to Nakuru police for further processing.

Police say cases of personation and obtaining money by false pretence are on the rise.

Sanjay told police he was approached by a Guinea-based fraudster who had offered to sell him 44.45 kilos of gold.

He then paid Sh195 million ($1,780,000) for the gold to be shipped from Guinea Bissau and flown to India through the Jomo Kenyatta International Airport.