•The expansive nature of the arid lands where Rift Valley Fever outbreaks occur makes community engagement to teach the pastoralists about Rift Valley and other zoonoses such as Brucellosis a daunting task. 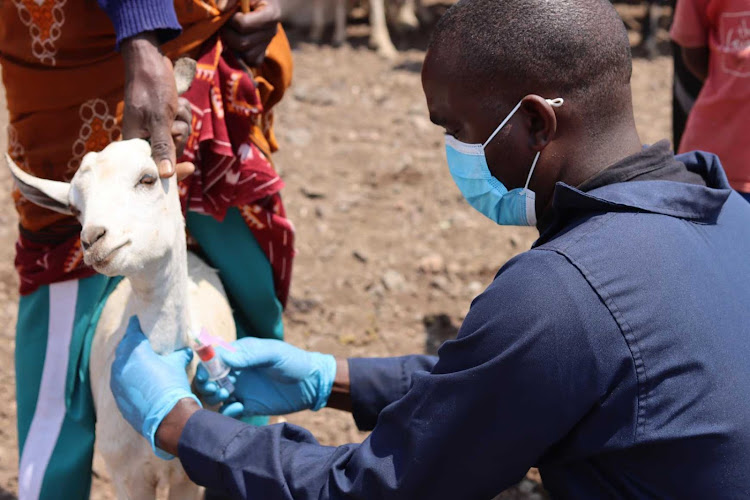 A vet collects blood from a goat for testing RVF in Isiolo.
Image: ILRI/ Geoffrey Njenga

Kenya’s veterinary services department has intensified vaccination of domestic animals in the north against the deadly Rift Valley Fever, but the community’s resistance is slowing down progress.

“The biggest problem we face while vaccinating is not the discomfort of dust or heat, but the resistance from the community,” veterinary technologist Musa Abdi said.

He spoke to the Star in Wajir East.

Abdi wants to vaccinate more than 6,000 sheep and goats before the short rains because once it pours, all animals will come together, and an outbreak will ensue.

However, the community elders resist vaccination arguing that the animals are weak from a prolonged drought and any injection will kill them.

Assisted by two junior technologists, Abdi drives for tens of kilometres in Wajir’s dusty terrain, looking for watering points where he knows he will find animals.

He often begins his day where the previous night found him.

He is passionate about this exercise because, he says, vaccinating an animal also protects the people who live close to the animals.

The communities are not being malicious.

In her 2016 paper in the journal BMC Public Health, Prof Bukachi found that the communities believed touching infected animals posed no risk to their health.

In a statement in February this year, the World Health Organisation said awareness of the risk factors of RVF infection, integrated vector control activities and protective measures against mosquito bites is essential in reducing human infection and deaths.

Dr Isaac Ngere, an epidemiologist at Washington State University Global Health Kenya, said scientists in Kenya have learnt from Covid-19 not to ignore any zoonotic disease.

“Like Covid-19, which has killed more than 4.6 million people now, the next pandemic will likely originate from animals,” he says.

Dr Ngere says that vaccination is one way to control diseases before it hits the population hard, but fears that the lack of a human vaccine is dampening the fight against the virus.

“The current vaccine against Rift Valley Fever is for animals and cannot be used on pregnant women because it causes abortions, so we need to invest in vaccines that are effective in people,” Ngere said.

The expansive nature of the arid lands where Rift Valley Fever outbreaks occur makes community engagement to teach the pastoralists about Rift Valley and other zoonoses such as Brucellosis a daunting task.

It certainly does not help that pastoralists are mobile. The ignorance in the community has had deadly consequences.

“Even more painful than seeing an animal die is watching a family member or friend die after contracting the disease that killed the animal,” Dr Ngere said.

Kenya is also one of the first in the continent to set up an independent Zoonotic Diseases Unit, established in 2006 to coordinate the response to all zoonotic diseases outbreaks in the country.

Researchers like Dr Ngere use syndromic disease surveillance, a system championed by International Livestock Research Institute in other counties.

The syndromic disease surveillance system uses clinical features that animals and people often portray before they get sick to alert them whether more cases are coming that could potentially be an outbreak.

These features or symptoms include coughing, fever or loss of appetite.

In this system, the community alerts community health workers alert a community Disease Reporter a layman who interacts with the farmers through their phone.

In turn, the community Disease Reporter informs the county departments of health who will respond to investigate further whether there is an outbreak.