Tim Wanyonyi: Politician by default, ready to serve as governor

• Having started of his legal career at Wetang’ula and Co Advocates, Wanyonyi looked forward to making it big in the profession until an accident in 1998 changed his life.

• He was shot by gangsters as he dropped a colleague in Ngara, leaving him confined to a wheelchair and changed his career dramatically. He suffered a spinal injury. 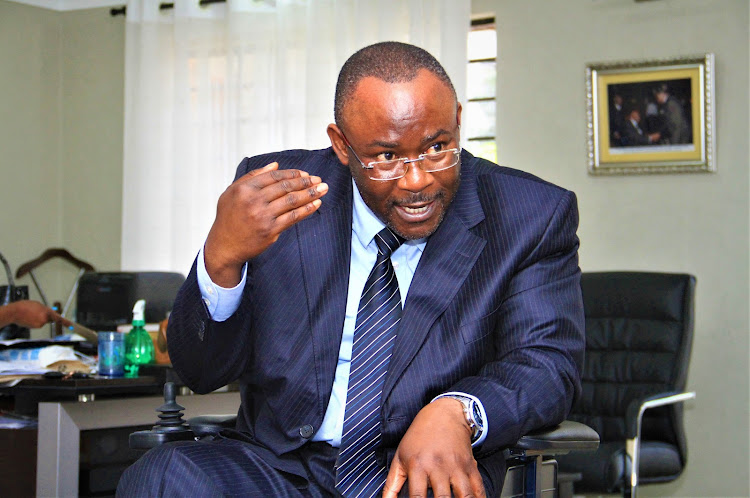 Westands MP Timothy Wanyonyi during an interview at his office in Nairobi on October 7
Image: EZEKIEL AMING'A

From personal experience, he realised there was no voice for people living with disabilities and he took initiative.

Having started his legal career at Wetang’ula and Co Advocates, Wanyonyi looked forward to making it big in the profession until an accident in 1998 changed his life.

He was shot by gangsters as he dropped a colleague in Ngara, Nairobi. The carjackers had already taken his car.

“I heard someone shouting, shoot him! Looking back thinking they had encountered someone else, I felt something had hit me in the back and I fell down. All of a sudden, I could not feel myself. The neighbours rushed me to Aga Khan Hospital,” he narrated in an interview with the Star on Thursday in his office.

He went to India for his Bachelor of Arts in Public Administration, Political Science and Sociology at Punjabi University (1988-91) and Bachelor of Laws (LL.B) at the University of Delhi (1991-94).

He returned to Kenya in 1996 for his Post-Graduate Diploma in Law at the Kenya School of Law.

The shooting left him confined to a wheelchair and changed his career dramatically. He suffered a spinal injury.

“I could not do many of the things. I used to like going to court. My colleagues’ attitude at the workplace changed. They even started diverting my clients and it reached a point that I left,” he said.

When he informed his elder brother and boss, Moses Wetang’ula, he says he reacted angrily because he did not want him to quit.

“But I was adamant and explained that I had made up my mind,” he said.

He went on to form Tim Wanyonyi & Co. Advocates in 2000, the Kenya Paraplegic Organisation (KPO) in 2004 and other businesses.

KPO seeks to inspire, empower and enhance the quality of life of persons with disabilities, specifically spinal and related disabilities.

In the run-up to the 2007 election, ODM leader Raila Odinga promised to nominate Wanyonyi to Parliament to represent persons living with disability. Instead, he was nominated to City Hall as councillor. That marked his entry into active politics.

“At that time, Raila said he wanted me to be the mayor because ODM had won the majority of councillors in the city. When we went to the elections, there was a fight between PNU and ODM.

“I called Raila and told him that for the sake of the party, 'I am stepping aside'. The two sides drew as some ODM councillors were compromised," he said.

Instead of repeating the vote, PNU councillors stormed out and went to then-Local Government Minister Uhuru Kenyatta.

A deal was struck in which ODM took the mayorship, while PNU took the deputy position (John Njoroge). They then shared committees. Wanyonyi became the only ODM committee chair, heading the Education and All-Purpose committees.

In 2013, he succeeded Fred Gumo as Westlands MP, who was retiring from elective politics. He had lived in the constituency since 2004. 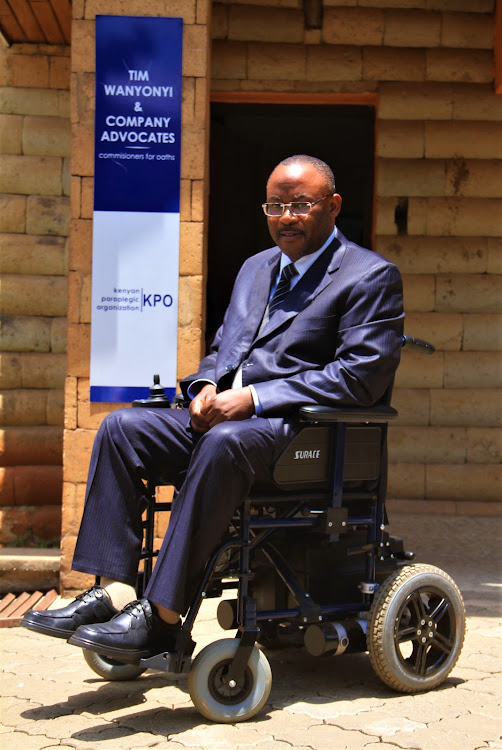 Westands MP Timothy Wanyonyi after an interview at his office in Nairobi on October 7
Image: EZEKIEL AMING'A

VOICE OF THE PEOPLE LIVING WITH DISABILITY

Since joining politics and following the promulgation of the 2010 Constitution, Wanyonyi says representation for PLWDS is more visible. More legislators represent the group at the national and county levels—both nominated and elected.

“This has given confidence to people with disability as they now have many voices in Parliament and county assemblies. Some of the legislation has also created structures dealing with people dealing with disabilities such as the national council with a budget,” he said.

He, however, notes more needs to be done as “several things in the Persons with Disabilities Act are yet to be realised".

He cites employment opportunities (five per cent of the workforce), accessibility to education and public transport.

Nominated Senator Isaac Mwaura who represent PLWDs Wanyonyi's win in Westlands was a show confidence in person with disabilities' leadership.

Mwaura, who worked with Wanyonyi in ODM, termed his election and re-election as a groundbreaker as it encouraged many other people living with disabilities such as Kajiado Woman Rep Janet Teiyaa to run for office.

"That he used  his full photo on his billboards during campaigns was also a good thing and when I asked him, he said he didn't want people to say they elected the wrong person," he said.

He describes Raila as his mentor and adviser.

“Any time I need to consult him, he is always ready to give that advice and has always walked with me in my political career. I always want to do the right thing and I have done my best as Westlands MP.

“And that’s why I will not will out of ODM any time. I am a life member of ODM, and I have no apologies to make,” he said.

He, however, admits his affiliation with the ODM leader at some point brought tension between him and his brother, Wetang’ula, the Ford Kenya party leader.

“In 2007, he was in PNU and I was in ODM. He was a minister in government and I was in the opposition. So it looked as if I was undermining him or making his colleagues think there are divisions in the family. None of it. We have had the Nyagas, where Joe Nyaga was in government, while Norman was in the opposition. For me, it was everybody for himself.

However, the differences are only political and not in the family. They also don’t discuss politics at home.

While Wanyonyi says Wetang’ula does not consult him on politics, he will not fail to point out something he sees that is not going well.

In what reveals his hand in helping his brother politically, Wanyonyi gives instances where his intervention either helped Wetang’ula politically or influenced his decisions.

“For example, when he was Foreign Affairs minister and there was this Tokyo embassy scandal, it reached a point where the investigating team had actually cleared him and the President was waiting for the report to clear his name," he says.

"But guys were playing politics with him and it hit him. So, I spoke to Prime Minister Raila Odinga, who was also the leader of business in the House, and asked him if he could help my brother. He told me just tell him he knows where to find me.”

Raila and Wetang'ula were then on different sides of the grand coalition government.

"They met and that helped him because Raila came on the floor of the House and said the investigating team had cleared Wetang'ula and there was nothing to hold him. He was appointed back to government,” Wanyonyi narrated.

He also revealed he is the one who influenced Wetang’ula moves from Kanu to Ford Kenya and joining Cord in 2013.

In the transition elections of 2013, Wanyonyi urged Wetang’ula to join Raila.

“I realised the other side didn’t really need him and it would be better to work with Raila. After some negotiations, they formed Cord,” he said.

Wanyonyi also said he is talking to Wetang’ula, urging him to negotiate for a position with Raila. He said he is “very sure” Oka will end up working with ODM and Jubilee.

Wanyonyi has declared his interest in the Nairobi governorship and maintains he is still in the race. He, however, noted that while it is all systems go for him, he does not want to rush in and be told to step back for someone else given the political formations that are underway.

“I am ready, my ground is ready and we are only waiting for the kick-off. But we are working on a political alliance and some of these things will be discussed and my party knows I am the only one from ODM who has declared an interest in Nairobi governorship,” he said.

He says he subscribes to politics of engagement, doing what the people need. He believes he has done all he had wanted to do in Westlands—empowered women and the youth, refurbished and equipped schools, invested in education and worked with the police to improve security.

Westlands a land of contrasts with initiative-driven progress

He says he has shown exemplary leadership while serving his two terms as the Member of Parliament for Westlands
Counties
1 year ago
by ELIUD KIBII Subeditor and writer
News
09 October 2021 - 08:05